On Thursday, the Power 4 Puerto Rico (P4PR) Coalition held a press call to update journalists about the outcomes of a #ShowUsYourPRPolicy campaign designed to ensure that presidential candidates  present action plans for the island. As part of the press call, coalition members, led by P4PR director Erica González, concluded that both Democratic presidential candidates Joe Biden and Bernie Sanders have Puerto Rico proposals that “are still lacking.”

Latino Rebels Radio has provided a full recording of the press call.

This call was held a few days before the upcoming March 17 Florida Primary, the state with a strong and significant number of eligible voters of Puerto Rican descent. 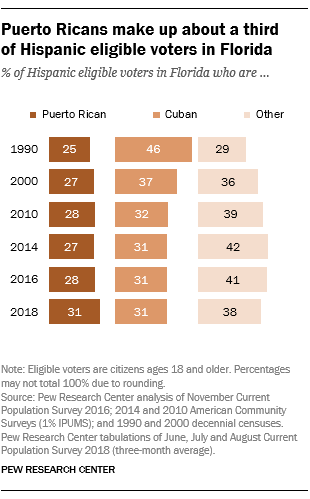 “While both Senator Sanders and Vice President Biden have outlined several of the action steps they would take to support Puerto Rico, both still fall short on addressing many of the challenges the Island faces,” González said. “During this same electoral cycle and with far less time in the race for president, we’ve seen candidates like Michael Bloomberg and Bill de Blasio roll out extensive plans to help the Island and Tom Steyer embrace Power 4 Puerto Rico’s policy blueprint. Biden and Sanders can, and should, do much better.”

The #ShowUsYourPRPolicy campaign launched last year in March with an open letter to all candidates.

“Power 4 Puerto Rico enlisted more than 60 local and national organizations in signing the letter and in various actions—from tweet storms and show-ups at campaign offices across the nation on the Second Anniversary of Hurricane Maria, to directly engaging the campaigns and candidates in meetings and at the Iowa and New Hampshire primaries,” a release about the efforts said. The call was for “comprehensive platforms to address the myriad of issues and crises” on the island.

“A piecemeal approach for Puerto Rico will simply not work,” the P4PR release said.

According to P4PR, this is where Biden and Senator Sanders stand on issue it feels are important for Puerto Rico:

“The unprecedented #ShowUsYourPRPolicy campaign has helped put the issues Puerto Rican voters care about at the forefront, while at the same time empowering communities all across the U.S. to engage in the political process like never before,” said Federico de Jesús, senior advisor for P4PR. “Boricua voters care about their island and the issues facing our family members there are daunting. Presidential candidates of both parties are learning that we will not be taken for granted and will demand the respect we deserve. The first step is showing up and telling voters where you stand. We should expect nothing less from our next commander in chief.”

“How Democrats engage, listen to and respond to Puerto Rican issues is of significant importance in this race. It will not be enough to consider Trump’s mistreatment of Puerto Ricans as a motivator in our communities. Our people want to know what the Democratic candidates will do differently. While the Puerto Rican population is booming in states like Florida and Pennsylvania, and will definitely be a factor on election day, candidates who take Puerto Rican voters for granted will pay a price,” Marcos Vilar, Executive Director of Alianza for Progress, said.

One of the action items higlighted on the press call by P4PR was the cleanup of Vieques.

“Vieques suffered decades of U.S. naval bombing exercises that Puerto Ricans and allies brought to an end, but is long overdue a safe cleanup, along with a full hospital and reliable ferry service,” said Myrna Pagán, a Vieques leader.  “We’d like to see both Sanders and Biden visit Vieques so that they can see with their own eyes what Viequenses are forced to experience, and hear how they would use the office of the president to support the struggle of Viequenses.”

The press call also pushed for an exemption of the Joens Act, which is “essentially a $1.5 billion tax on Puerto Ricans,” the P4PR released said.

“Puerto Rico must be exempt from section 27 of the Jones Act of 1920 because of its antiquated, economically strangling policy,” said Adela López, President of Misiόn Boricua.

Finally, the press call included comments from Florida Immigrant Coalition, one of the the #ShowUsYourPRPolicy allies.

“Immigrants and Puerto Ricans understand each other’s struggles, especially in the face of this hostile, anti-Latino president,” said María Rodríguez, Executive Director of the Florida Immigrant Coalition. “In a state like Florida, where our numbers are so great and will influence the outcomes of the primaries and general elections, both Biden and Sanders must present their vision and the course of action they would take for both immigrants and Puerto Ricans.”

One response to “Show Us Your Puerto Rico Policy: Advocates Say Biden and Sanders Plans Are ‘Still Lacking’”