Meet the New Wanda, Same as the Old Wanda: On Puerto Rico and Its Continued Political Mediocrity 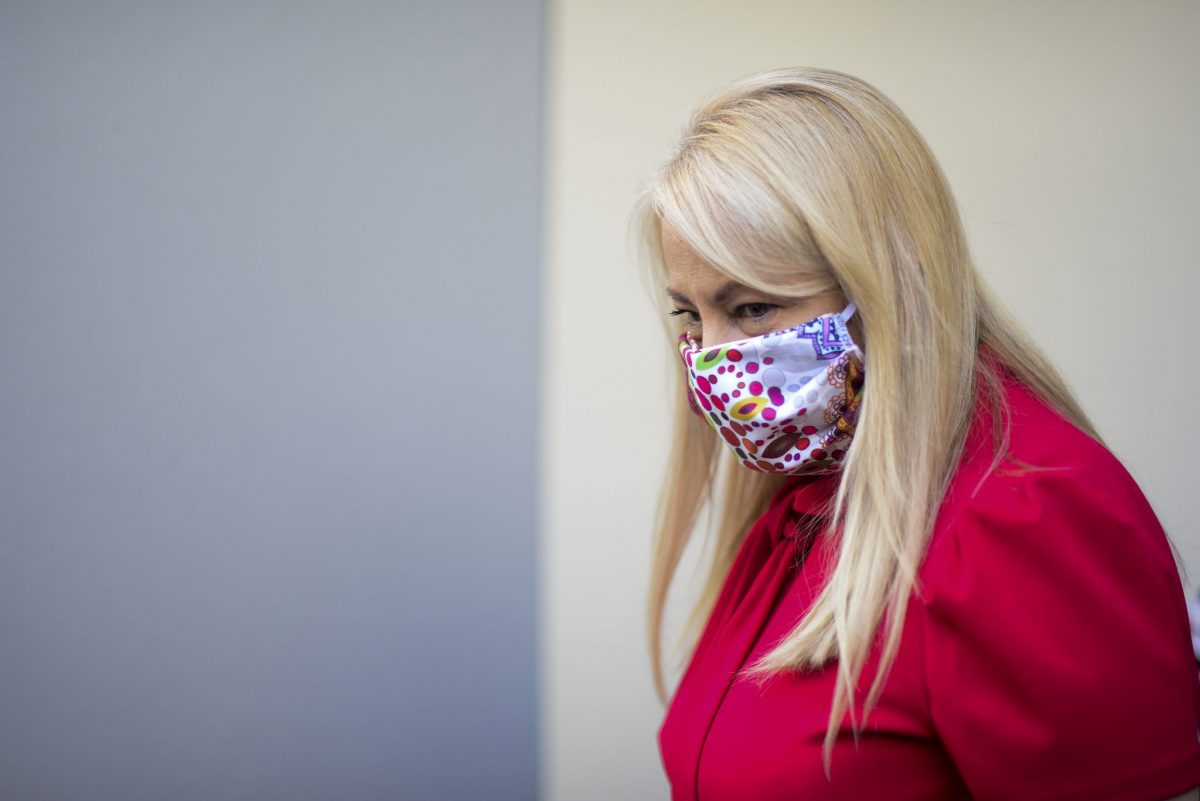 Gov. Wanda Vazquez, wearing a protective face mask, arrives for a press conference to announce that she has ordered the cancellation of all contracts awarded to people and companies whose names have been publicized as part of a local and federal investigation into the intended purchase of new coronavirus testing kits, in San Juan, Puerto Rico, Thursday, April 16, 2020. (AP Photo/Carlos Giusti)

Puerto Rico governor Wanda Vázquez is handling the coronavirus crisis in the most Trumpian of ways—don’t pay attention to science and worry about your political survival instead.

Despite an aggressive plan to install an island-wide lockdown that continues to this day and shows no sign of ending, Vázquez has become the latest in the line of mediocre and short-sighted Puerto Rico politicians who appear to rattle in a time of serious crisis, even though she is the first one to insist that all she is doing is prioritizing the health and safety of an estimated 3.1 million of Puerto Ricans.

The current public data would suggest that while the number of positive cases is still low in Puerto Rico (26 out of 100,000 people), testing per capita is the lowest of any jurisdiction under the U.S. flag. The low testing issue was an alarm sounded off by Puerto Rican scientists since the middle of March, and according to PRCiencia —a nonprofit organization that advocates for the advancement on the island— without proper testing or dedicated contact tracing, there is not enough data to claim that Puerto Rico is in the clear at all.

“One direct result of the lack of testing, contact tracing and other types of epidemiological surveillance is that Puerto Rico does not have enough data to inform its response to COVID-19,” CienciaPR’s Mónica Feliú-Mójer told me. (Feliú-Mójer wrote an opinion piece for Latino Rebels over the weekend that shares a timeline of where she believes the Vázquez administration failed.)

“We will not know if physical distancing measures, which have been pretty aggressive in Puerto Rico are actually working if we do not have enough data,” Feliú-Mójer added. ”Projections are inaccurate if there is not enough data to inform them. Puerto Rico lacks statistics on which populations are the most vulnerable to this coronavirus. We don’t have a clear idea of how many people have developed severe symptoms. We lack a clear demographic picture of who is more affected by the virus in Puerto Rico.”

Meanwhile, at the time of this posting, Puerto Rico’s death rate from COVID-19 is the same (5 %) as the national U.S. average (5%) and also higher than a state like Florida (3.2 %), a place with a warm climate and an aging population—two characteristics that also apply to Puerto Rico.

During last’s Thursday press conference in San Juan —her first one in over a week— Vázquez explained that she was just following the same low testing model that the United States was following, where calls for mass testing have been ongoing ever since President Trump decided to finally pay attention to a crisis that has now reached more than 816,000 known cases and 41,000 dead Americans.

It’s as if science doesn’t matter to Vázquez, and when she started her Thursday remarks with promises of $500 relief checks instead of immediately addressing the political controversy of a $38 million purchase of faulty rapid tests by her administration from a construction company, it became just the latest example of a corrupt political class in Puerto Rico that has always put profits over people, money over lives. The money push continued on April 22, with news of federal aid from the CARES ACT.

Just earlier this year, Vázquez failed in explaining the sudden “discovery” of unused relief supplies when earthquakes were striking the southern side of the island for weeks. Back then, she claimed she didn’t know anything about the hidden supplies until she did. Last Thursday in San Juan, Vázquez was condemning corruption once again, promising to have it all investigated while she asserted that draining Puerto Rico’s swamp was the vow she took when she became the island’s unelected incumbent governor after embattled governor Ricardo Rosselló resigned during a historic summer of protests.

Nobody who understands how deeply rooted Puerto Rico’s political corruption is, believed her.

That Thursday press conference fiasco happened the day before the island’s Secretary of Health told Puerto Rico’s Centro de Periodismo Investigativo that the data surrounding current COVID-19 tests could contain duplicates or even triplicates. Such an admission —seen as yet another example of government ineptitude— only raised the issues about the serious problems of low testing. In essence, nobody in Puerto Rico really knows how many people have the coronavirus and that’s what has scientists and residents of the island worried.

These are thew same voices who go on state-run TV to praise low testing.

The same voices who on Palm Sunday ensure that this will all pass by the first week of May.

Vázquez points to the data of new cases and how it appears that Puerto Rico will be flattening the curve by the 1st week of May and says that it is the best evidence of her responsibility to protect the people of Puerto Rico.

No scientist —especially when you don’t have actual real data— would tell you that, but the government of Puerto Rico has no problem pushing that narrative.

Distrust in Puerto Rico’s government has taken a dramatic turn recently on an island territory that is not really a part of the United States but it actually owned as a piece of territory by Congress. Images of paper towels being tossed at Puerto Ricans by President Trump during the federal government’s pitiful Hurricane María response might symbolize some of that distrust, but that’s only part of the story.

For decades, a political class that is mostly affluent, whiter and based in San Juan has taken Puerto Ricans for colonial fools. Cozying up to Wall Street led to a massive debt that has left the island bankrupt and in the literal fiscal control of a board formed by a bipartisan PROMESA Act signed by President Obama in 2016. Austerity has since been ruling the day—with massive cuts to services and a feeling of no future. When Hurricane María decimated Puerto Rico in 2017, claims of low death counts by the Rosselló administration were the official government narrative until journalists exposed the truth. The response to the earthquakes of late 2019 and early 2020 were just the latest example of Puerto Rico’s government ineptitude.

Now it is COVID-19, and many in Puerto Rico’s scientific community are worried that Vázquez is leading the island to another path of destruction.

“I think the lack of data and transparency fuels the existing mistrust in the government, which then impacts people’s willingness to listen to public officials during an emergency,” Mónica Feliú-Mójer said. “If there is one thing we Puerto Ricans learned after Maria, is that a lack of transparency is not only outrageous, but deadly.”

Small signs of distrust are starting to appear, from examples showing swarms of police officers arresting people for violating curfew during the day to a small group of protesters led by a feminist collective that called for more mass testing in Puerto Rico and less political corruption.

Last Thursday, Vázquez brushed off critics by referring to herself in the third person, saying that she will continue to fight for Puerto Rico and that it’s easy to judge and criticize.

In essence, she didn’t care.

The arrogance of a sitting governor not chosen by voters seethed through that answer and the island’s press in general, who had already been protesting being shut out from recent public media information sessions with the governor and her COVID-19 task force. Most of Puerto Rico’s press believes she is just spouting state-run propaganda now.

Political observers think that Vázquez is making a last gasp to try and become her party’s 2020 nominee against former Resident Commissioner Pedro Pierluisi, who was Rosselló’s last Secretary of State and governor for a few days until the island’s Supreme Court said his power play was unconstitutional and that Vázquez, then the Justice Secretary, was next in line.

Since that day last August, Vázquez seems to be more worried about herself and her political image. The buck definitely doesn’t stop with her and she will deflect blame on anybody else just like the fellow Republican President she wants to appease, even if it means that more and more Puerto Ricans will suffer from a COVID-19 crisis.

All you need to see is that Vázquez is desperate. This one tweet from Wednesday night would confirm it.

Case closed. Wanda is all about Wanda.

3 responses to “Meet the New Wanda, Same as the Old Wanda: On Puerto Rico and Its Continued Political Mediocrity”