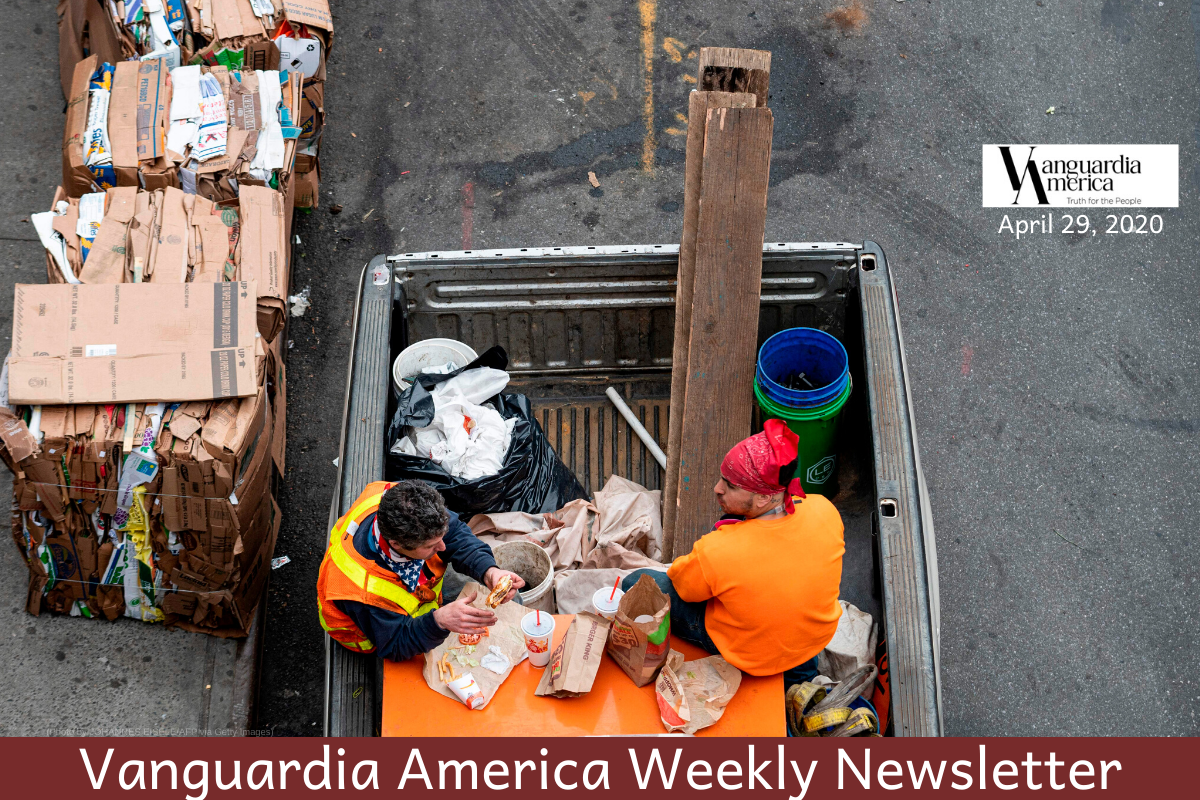 Workers ave their lunch break in a pickup truck in the Corona neighborhood of Queens on April 29, 2020 in New York City. (Photo by JOHANNES EISELE/AFP via Getty Images)

Despite thousands of confirmed cases of COVID-19 among workers at meat and poultry plants across the country, President Trump, citing fears of major meat shortages, has ordered the facilities to stay open.

The meat and poultry production industry depends heavily on the labor of mostly immigrant and Latino workers to operate. According to a 2017 report by the American Public Health Association. “In meatpacking and poultry processing, 34% of the workforce is Hispanic.”

Additionally, widespread news reports in recent weeks indicate the threat from the coronavirus is disproportionately greater among Latinos and African Americans, large percentages of whom cannot work remotely, do not have medical insurance, and suffer from chronic illnesses that make them more vulnerable to the effects of COVID-19.

President Trump signed an executive order Tuesday invoking the Defense Production Act, which The Washington Post says compels “meat processors to remain open to head off shortages in the nation’s food supply chains, despite mounting reports of plant worker deaths due to covid-19.”

Latino advocacy groups and unions have questioned whether the plant owners have provided adequate safety protections. The Post reported last week that workers in Indiana, Iowa and Colorado have alleged “that personal protective equipment was not promptly distributed.”

“The workers are scared,” said Kim Cordova, president of the local chapter of the United Food Commercial Workers (UFCW) union in Greeley, Colorado, where at least five people (three of them Latino) have died at a JBS USA meat processing plant. The plant was closed for 9 days, but reopened Friday. Critics say the plant reopened despite JBS reneging on its promise to test all of its workers.

In an interview with the Post, Cordova said, “If these workers are essential, protect them. They are treating workers like fungible widgets instead of human beings.”

The federal Centers for Disease Control and Prevention and the Occupational Safety and Health Administration have issued guidelines for how the plants can operate safely, but Cordova and other labor activists note that the instructions are voluntary and unenforceable.

The Reuters news agency reports Mexico has “almost entirely cleared out government migrant centers over the past five weeks to contain the spread of the coronavirus pandemic, returning most of the occupants to their countries of origin.”

In a statement, Mexico’s National Migration Institute, said it has deported more than 3,600 migrants that were being held at 65 federal facilities and sent them to Guatemala, Honduras and El Salvador, according to Reuters.

Tens of thousands of Central America refugees have been turned away at the border in recent months by the Trump administration and ordered to wait in Mexico while their applications for U.S. asylum are reviewed. More recently, migrants, including unaccompanied minors, have been turned away without being allowed to apply for asylum, according to federal authorities, as part of the Trump Administration’s effort to prevent the spread of the coronavirus.

Leading Congressional Democrats have called on House Speaker Nancy Pelosi and Minority Leader Kevin McCarthy to “guarantee that Puerto Rico is treated equally to the states in any of the upcoming coronavirus stimulus packages,” according to a report by NBC Latino.

“Even before COVID-19, Puerto Rico was suffering immensely from earthquakes earlier this year, long-standing economic and physical damage from Hurricane Maria and decades of economic neglect,” Velázquez told NBC News in a statement.

So far, Puerto Rico has received “$2.2 billion from the U.S. Treasury Department as part of the coronavirus stimulus package signed into law in late March,” NBC Latino reports, but “the lawmakers argue more needs to be done to ensure the island is equipped to survive the pandemic.”

San Juan, Puerto Rico Mayor Carmen Yulin Cruz has alleged that people on the island have yet to receive the $1,200 U.S. government stimulus checks authorized to be sent to American adults in the wake of the COVID-19 pandemic, during an interview Saturday with MSNBC Anchor Alicia Menendez. Cruz blamed local government inefficiency and a lack of federal guidance for the delay in the payments to Puerto Rico residents.

More than two dozen people were wounded in the massacre. Garcia’s death brings to 23 the number of people killed during the rampage in a Wal-Mart parking lot last August.

El Paso’s District Attorney Jaime Esparza is seeking capital murder charges against the alleged killer. Patrick Crusius was indicted on 90 federal counts for his involvement in the crime. He was also charged with a federal hate crime.

Police authorities say Crusius confessed to driving 10 hours from his Dallas bedroom community to El Paso intending to kill Mexicans. Most of those who died were Latino, including several victims who were Mexican nationals.

“Garcia and his wife Jessica Coca Garcia were with their daughter’s soccer team fundraising outside the Walmart when the gunman opened fire on Saturday morning bustling with back-to-school shoppers,” according to the El Paso Times.

Garcia was shot in the back and leg protecting his children. Jessica was shot three times but survived. The family set up a GoFundMe account for donations.