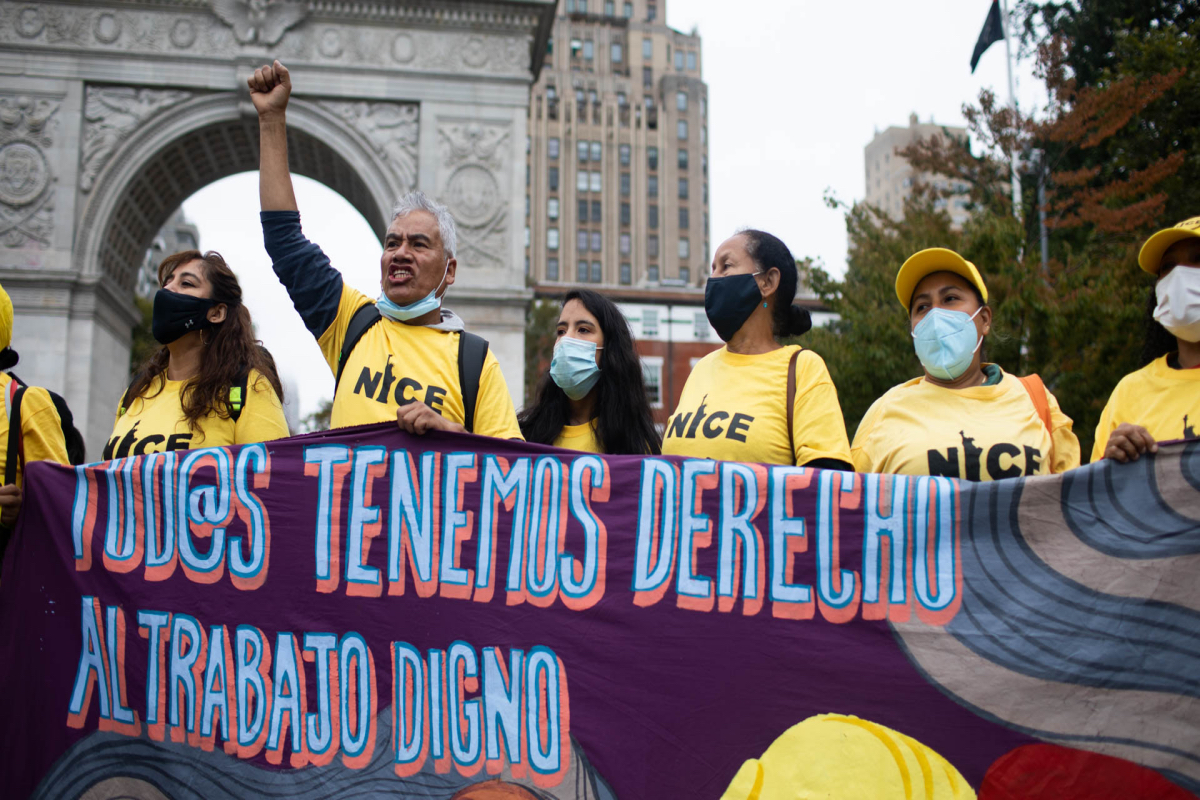 Haywood came to the United States from Trinidad and Tobago 21 years ago and worked as a house cleaner in New York. When COVID-19 shut down the city, most of her clients fled, buying houses in other states. They never came back.

“Ninety-nine percent of my base is not here anymore,” says Haywood, who has been out of work since June 2020. “I was getting eviction letters. I had never fallen behind before.”

Recently, Haywood became one of more than 114,000 undocumented workers in New York who were approved for a one-time direct payment from New York’s Excluded Workers Fund. She’ll receive $15,600 in the form of a debit card mailed to her home. 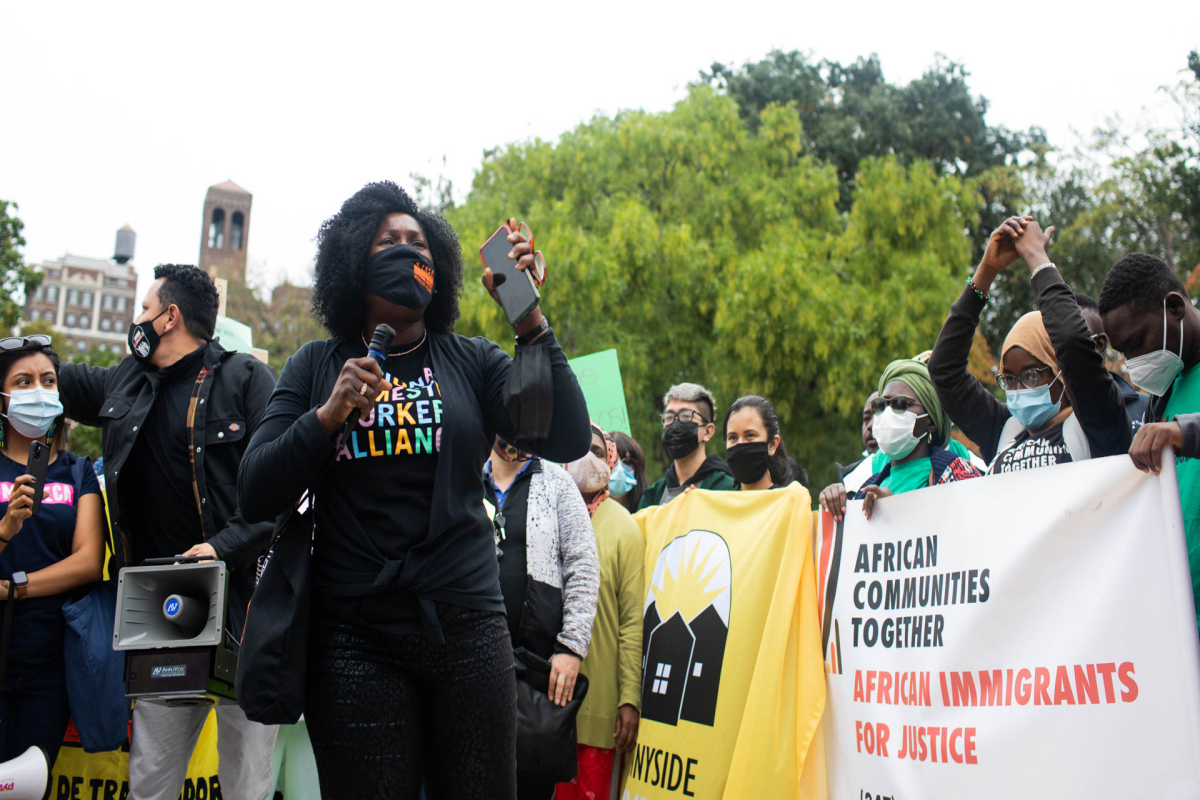 Gina Haywood recently received notice that her EWF application was accepted, but she’s fighting for more funding for those who have not yet been approved. (Photo: Gabriela Aoun/Latino Rebels)

Over 330,000 people have submitted claims to the Excluded Workers Fund, and just two months after applications opened, the $2.1 billion fund is nearing depletion. The program was the first of its kind in the nation and has demonstrated an overwhelming need for financial assistance that has been largely underestimated.

As demand outruns supply, lawmakers, workers and advocates are calling for more money.

Haywood was among a couple hundred demonstrators today in Washington Square Park demanding a second round of funding in next year’s state budget. “I just received my letter [of approval], and I thank God for that. But I want to thank God for you too,” she told the crowd.

The Excluded Workers Fund allocated money through the state budget for relief payments for undocumented immigrants who lost work during the COVID-19 shutdown. It offers a Tier 1 payment of $15,600 or a Tier 2 payment of $3,200, depending on what type of documentation applicants provide.

Undocumented workers did not qualify for federal pandemic relief stimulus payments or unemployment benefits. Some payments also excluded their spouses and children, even if they held Green Cards or were U.S. citizens. According to the Migration Policy Institute, about 1.2 million people in New York were excluded from some or all of the payments. 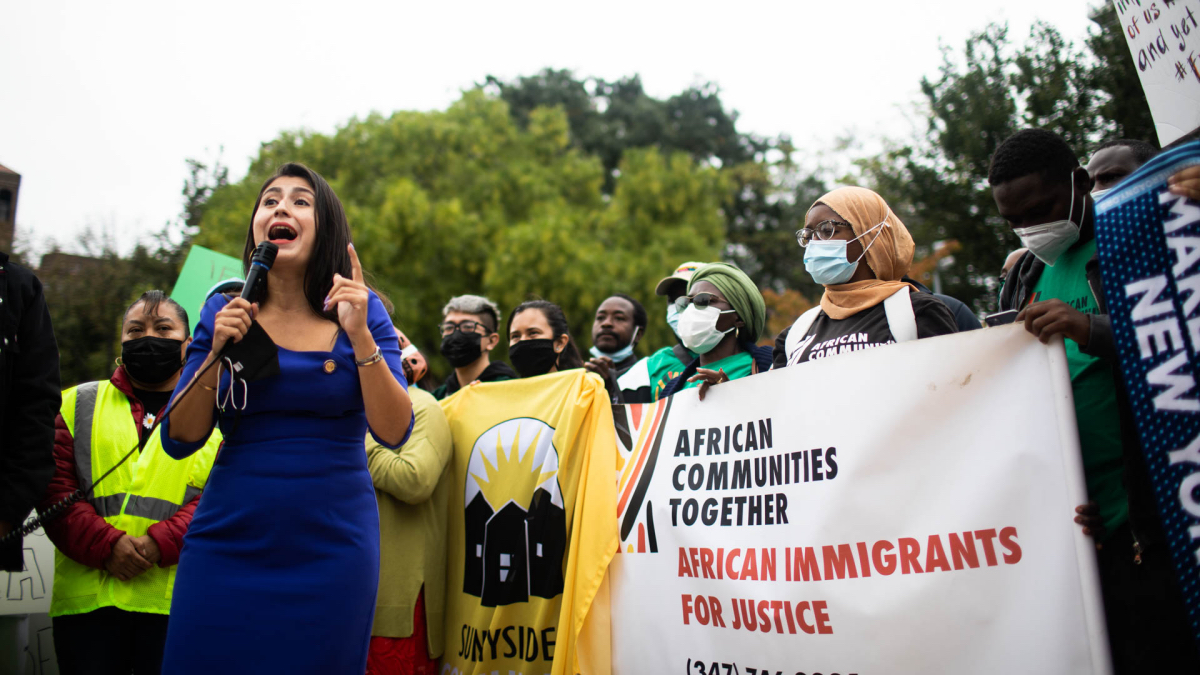 State Senator Jessica Ramos is calling for another round of funding for excluded workers in next year’s state budget. (Photo: Gabriela Aoun/Latino Rebels)

“We have proven to the world what we already knew: that immigrants are the ones who sustain New York’s economy,” Senator Ramos told the crowd in Spanish. “We have to commit to fighting for a second version of the fund when the budget fight comes next year.”

“The original ask was for $3 billion,” Assembly member Carmen De La Rosa (D-Manhattan) told me last week. She sponsored the original assembly bill. “Undocumented immigrants are often living in the shadows. Projections about how many could be served have clearly been blown out of the water.”

When the Excluded Workers Fund first passed in April 2021, the Fiscal Policy Institute estimated that 290,000 workers would qualify, including 92,000 for Tier 1 benefits and 199,000 for Tier 2 benefit. In the end, more than 99 percent of approved applicants have qualified for the Tier 1 payment.

While New York Governor Kathy Hochul has the authority to make money available prior to next year’s budget negotiations, as she did when she authorized $27 million in relief for undocumented immigrants after Hurricane Ida, Senator Ramos says this type of emergency funding won’t meet the scale needed to ensure every undocumented person who lost work receives relief.

“If it means waiting until next April and the next budget season in order to ensure we get enough money, then we can work with that,” says Bianca Guerrero, campaign coordinator for the Fund Excluded Workers Coalition. “We want to make sure that every single person who is eligible and applies for this fund actually gets the money that they are owed.” 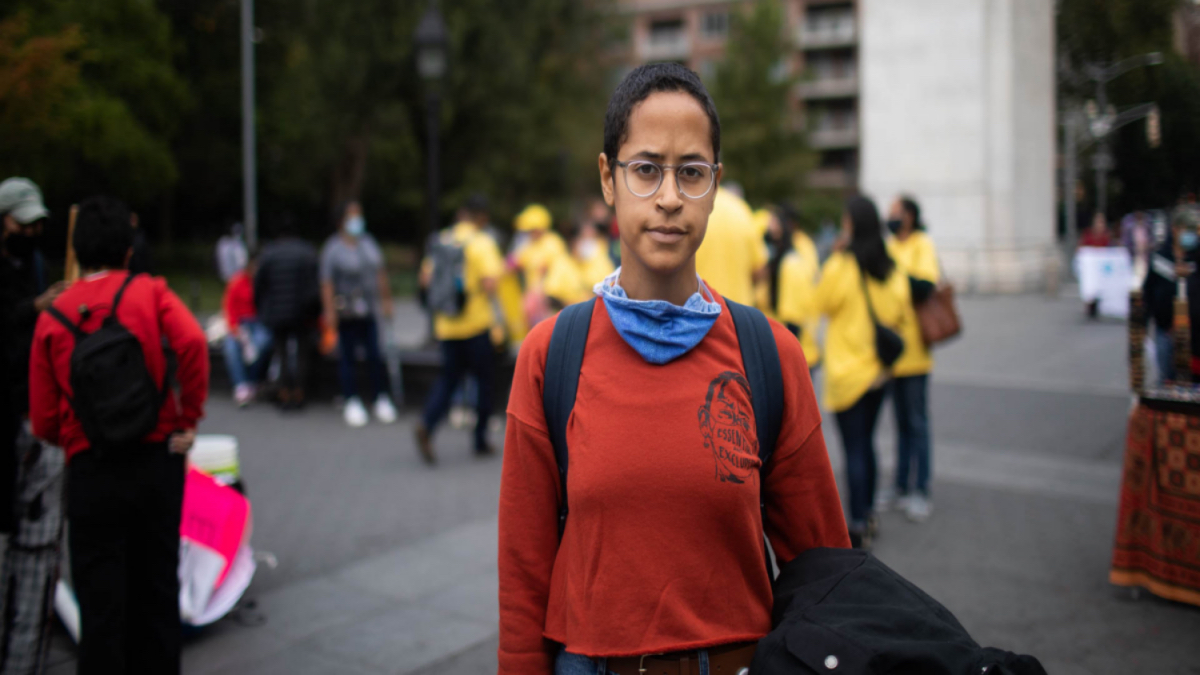 Bianca Guerrero, campaign coordinator for the Fund Excluded Workers Coalition, says some small revisions to the requirements would open access to workers who have struggled to prove they qualify for assistance. (Photo: Gabriela Aoun/Latino Rebels)

The coalition of 75 community organizations has been conducting outreach across the state and helping workers submit claims. But many workers in rural areas still don’t know about the fund, and bureaucratic obstacles have prevented many from applying or having their claims approved.

Workers who were only paid in cash can have difficulty proving their income. Other applicants are struggling to prove their residency. And some of those affected by Hurricane Ida flooding lost all of their records, including passports, pay stubs and tax forms, and are struggling to provide any documents at all.

Afsana Pervin, who spoke at the rally, said she has not been able to apply for the fund because she is still waiting on her passport from the Bangladeshi consulate. She has been in the United States for 26 years and worked for a catering company before the COVID pandemic hit.

“As a single mother of two children, I could put food on the table and pay rent,” she said through a translator. “When COVID started I lost my job. I desperately need this money, and many more people like me are left out as we wait for proof of identity documents. I am requesting to increase funds and [extend] the timeline so we can apply and get this money.”

Guerrero says the coalition has proposed solutions to these issues and hopes that a new round of funding would incorporate revised methods for qualification.

Despite these issues, the Excluded Workers Fund has served as a proof of concept for coalitions in other states seeking pandemic relief for undocumented workers. In Johnson County, Iowa, immigrants and advocates have called for at least $20 million to be put into an Excluded Workers Fund.

Neither Ramos nor Guerrero would specify how much money exactly should be added to the New York fund. “I would ask for at least the same money to be allocated,” says Ramos, “but I’m very hopeful that we’ll be able to make serious proposals toward revenue raisers that would allow us to tax billionaires, and hopefully raise more money to help the poor working class out of the hole that we’ve dug them into.”

Gabriela Aoun is a writer and producer focused on the intersection of environmental and social issues. She is a Columbia Journalism School Class of 2022 master’s student and previously served as content director of the Adventure Sports Network. Twitter: @gabriela_aoun.