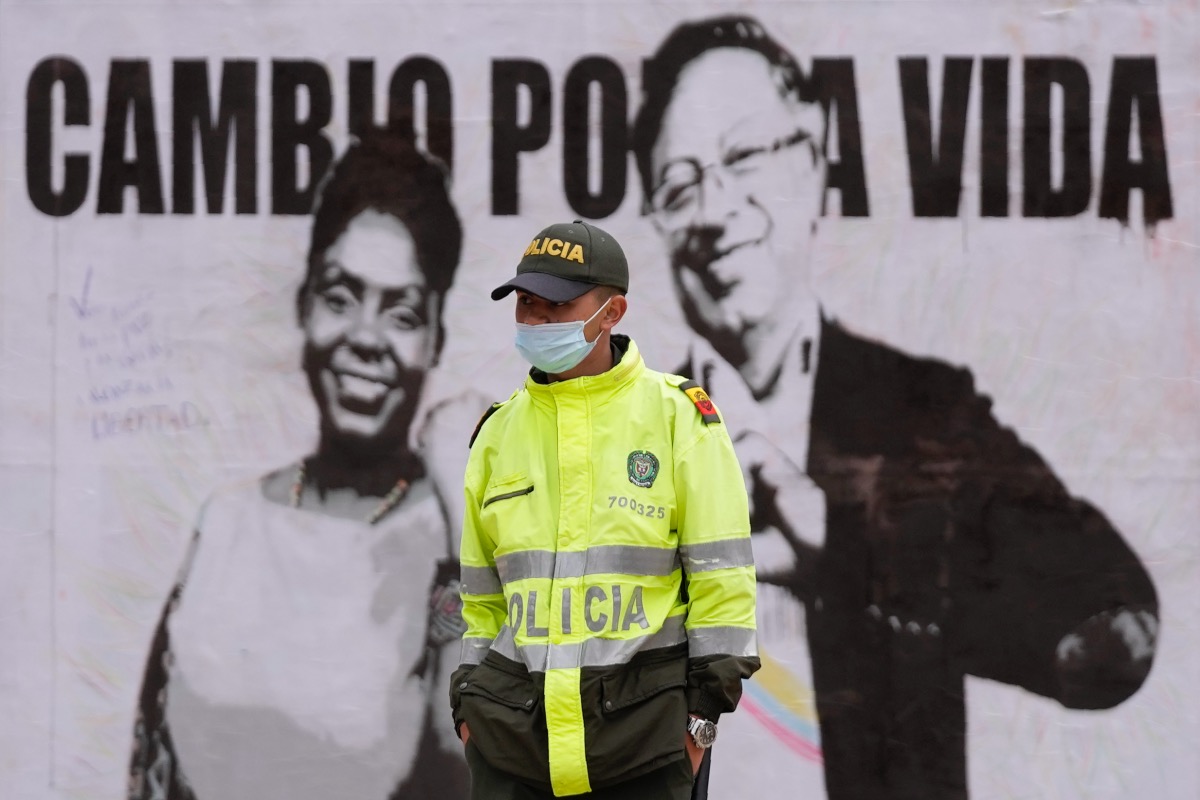 A police officer stands guard near a campaign sign for presidential candidate Gustavo Petro and his running mate Francia Marquez, with the Historical Pact coalition, ahead of weekend elections in Bogota, Colombia, Wednesday, May 25, 2022. Colombians go to the polls on May 29 to elect a new president. (AP Photo/Fernando Vergara)

MADRID — On Sunday, May 29, Gustavo Petro plants to make history in Colombia. For the first time in the country’s 200-year history, a left-wing contender —and a former guerrilla member to boot— is the favorite to win a presidential election this close to the vote.

The 62-year-old candidate is topping every poll, winning between 40 and 46 percent of likely voters, depending on the source. Put simply, he is the man to beat—so much so that for the past few weeks his stated goal is to win outright in the first round.

It would be only the second time that this happens. To do so, he will need at least 50 percent of the ballots cast. While some say he can do it, others argue that this very divisive figure has reached his electoral peak.

The situation is not entirely uncharted territory, but his position in it is. This is Petro’s third presidential campaign, second successive one. Four years ago he managed to get to the second round and got a historic vote for a losing candidate.

Nevertheless, he always lagged behind the eventual winner, Iván Duque, in the polls. Fast-forward to 2022 though and Colombia, as well as Petro, have changed dramatically.

The country, whose economy is predominantly informal, experienced the crippling effects of the pandemic lockdown as hunger and poverty rose alarmingly. The government hesitantly took on a welfare role it had never before assumed, and to fund it pursued an ill-timed tax reform, which targeted the already affected and heavily burdened middle class.

The result: Colombia erupted in protest.

The grievances went far beyond the fiscal amendment: deficient health and pension systems, lack of access to quality education, failure to implement the peace deal signed with the FARC guerrillas in 2016, and rising insecurity, among many others. So the protests continued long after the proposed reform fell through in Congress. The nation was paralyzed for months, and the government used a heavy hand on those out on the street, killing dozens —the exact number is disputed— and injuring many more.

As a result, President Duque and his government’s popularity sank to a new low for the sector of the establishment they represent.

At the same time, Petro channeled the social discontent and encouraged the protests. He was criticized at the same time for being the architect behind the social unrest, as well as for jumping on the bandwagon and instrumentalizing the crisis.

Regardless of his critics, the fact is that, as the main figure of the opposition, the whole situation played into his hands.

Petro has been campaigning since his defeat in 2018, in an attempt to expand his base and with his eyes firmly on this year’s vote. Four years ago, he ran under his own party, Colombia Humana (Humane Colombia), making a point of steering clear of strategic alliances that would compromise his policies if elected.

This time around, his flag is that of the Pacto Histórico (Historic Pact), a wide coalition that encompasses every movement on the left. More important, though, it has also accepted seasoned politicians from the center and center-right of the political spectrum who, having seen the people express themselves on the streets, are quick to embrace a man who advocates for structural change.

The image this has produced is of a more moderate candidate willing to listen to concerns from different factions and better equipped to unite the electorate. While his vice-presidential running mate is Francia Márquez, a Black, feminist environmental activist who has been the biggest revelation of this campaign season, getting more than 700,000 votes in the primaries, his campaign chief is Armando Benedetti and his debate chief is Alfonso Prada, both of whom held important positions during the center-right presidency of Juan Manuel Santos (2010-2018).

Exactly how accommodating such different figures within his team will play out if Petro wins the presidency remains to be seen. On the electoral stage, at least, it means the Pacto Histórico has created a political enthusiasm that Colombia hasn’t experienced in decades.

It has also led to heavy criticism from across the board, with those to his left calling him a sellout, while the right labels him a dangerous populist who cannot be trusted. Yet he has stood firm in defense of his pragmatism, which is the end-point of a long political trajectory that started, according to his own memoirs, while reading Marx’s Capital as a teenager.

At university, where he studied economics, he joined the M-19, a largely urban guerrilla organization in a non-armed role. While secretly a militant in the movement, he also held his first public office, as councilor in Zipaquira, the town he grew up in near the capital Bogotá.

A few years later, he was put in jail for belonging to an insurgent group, but he was released in the late ’80s as the M-19 negotiated the peace deal which would also bring a new constitution to the country.

Once out, in the ’90s Petro again served publicly, this time at the state level and later as a diplomatic attaché in Brussels—a post he got to protect his life, since at that time leftist militants were being killed indiscriminately by the intelligence agency allied to right-wing paramilitary organizations. He didn’t last long in Belgium, and returned to politics in Colombia, getting a seat in the Chamber of Representatives in 1998, which he held until 2006, when he got elected to the Senate for the Polo Democrático, Colombia’s sole leftist political party with representation at the time.

That is where he became a household name. In now-historic debates, Petro uncovered links between politicians and right-wing paramilitary groups—a scandal that ended with many of them in jail. He was also the person who first denounced at such a stage what would become known as the “false positives,” the practice within the military of extra-judicial killings of civilians, who were then passed off as guerrilla fighters killed in combat to inflate casualty numbers.

Riding the wave of his parliamentary success, he ran for president in 2010. He failed, though, getting around nine percent of the vote in the first round.

But he wouldn’t let that keep him down for too long. In 2012, he became mayor of Bogotá, considered the second most influential elected position in the country.

Yet his time in office would be tainted after being ousted for his waste management policies by the “procurador”—a kind of attorney general who is meant to enforce compliance to the constitution by the government itself. The decision didn’t stand scrutiny, and he was reinstated just over a month later, though the scandal follows him to this day.

That episode is one of the many things Petro’s opponents invoke in their attempt to smear his career and character. “Guerrilla fighter,” “communist,” “stoker of class hatred,” “inept,” “egomaniacal,” and “tyrannical” are adjectives that get thrown around when talking about him these days.

Nonetheless, he seems unfazed by it. In front of full crowds on the campaign trail he has bitten back with speeches where he mentions an entrenched oligarchy and a political class interested in keeping the status quo and willing to do so with violence—it helps to have the evidence of 1,298 assassinated social and community leaders in the past six years, by far the worst record in the world.

Yet his focus is on the country he envisions.

His proposals center on the rebooting of Colombia’s official and unofficial economic model: to go from being mainly an exporter of fossil fuels and drugs to taking advantage of the country’s vast unused lands and becoming a major producer of food, since at the moment it is a net importer of foodstuffs despite being one of the most fertile places on earth.

Petro also wants to heavily reform the pension, health, and education systems, and is committed to complying with the 2016 peace accords, especially the land reform at its center, in order to achieve his first goal.

Throughout the campaign, Petro has set the tone and the agenda. He has shown his own evolution, having learned to pick his battles. For his opponents, on the other hand, it has always been a matter of beating him, not of winning the elections.

Whether he comes out on top on Sunday, or in the second round on June 19, at this stage — and as if it were meant to be— the president’s seat is his to lose.

Nicholas Dale Leal is a Colombian-British journalist based in Madrid. Twitter: @ndaleleal