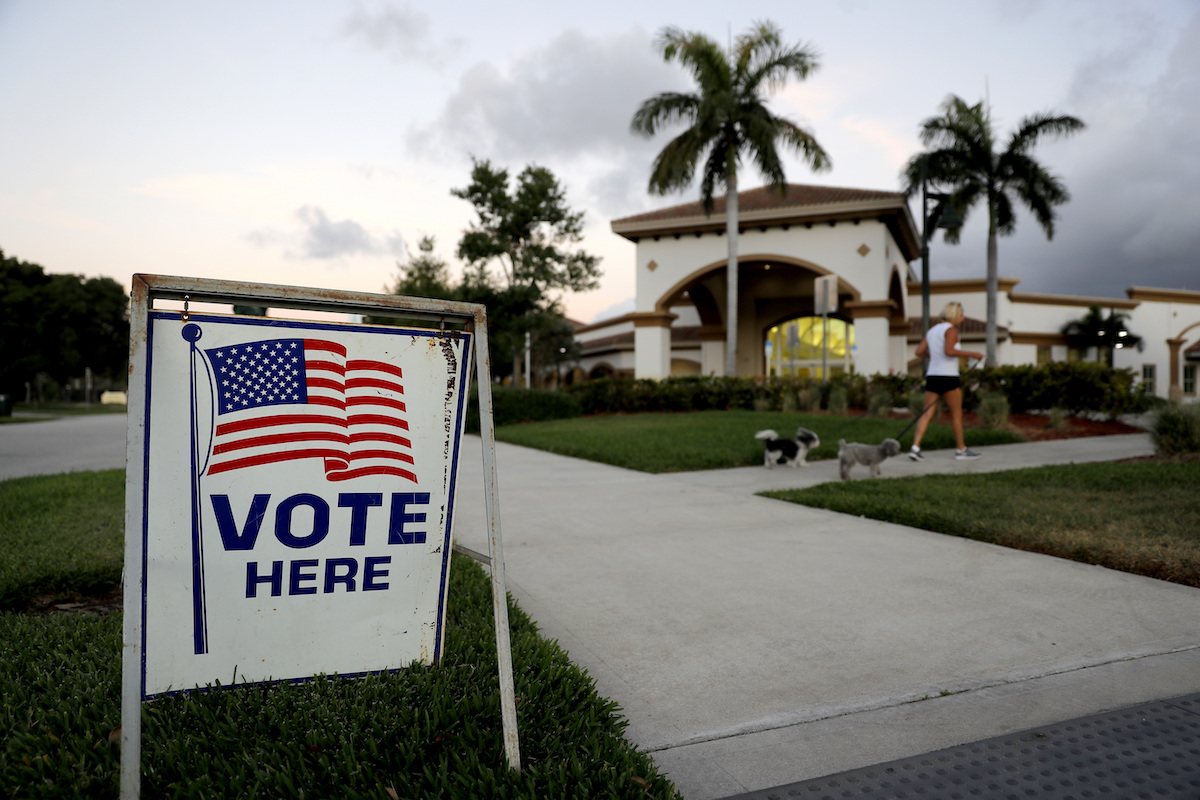 A sign is placed outside of a polling place at the Boca Raton Library during the Florida primary election, Tuesday, March 17, 2020, in Boca Raton, Florida. (AP Photo/Julio Cortez)

“I’m an independent, but I really like the way that Republicans think,” Rita Cancio, a fast food manager in Florida, told Latino Rebels.

Cancio is one of the respondents to Futuro Media’s first-ever poll of Latino voters, and her statement illustrates the political environment in a battleground state that is quickly becoming a stronghold for the GOP.

The poll, conducted by IZQ Strategies for Futuro Media in both English and Spanish between October 6 and 11, asked 463 Latino voters in Florida about their thoughts on issues such as energy costs, public healthcare, and abortion, as well as their stances on certain politicians ahead of the midterm elections in November.

Arguably the most surprising revelation is that Republican Gov. Ron DeSantis enjoys high favorability among Latino voters in the Sunshine State, at 52 percent. Meanwhile, President Joe Biden has 43 percent and former President Donald Trump, a rival for DeSantis in the 2024 presidential race, has 48 percent.

Florida Republican Sen. Marco Rubio enjoys 50 percent favorability among Latino voters in the state, while his Democratic opponent in the senatorial race, Val Demings, received the lowest rating of the four politicians, at 36 percent.

Based on data from the Pew Research Center, Florida is home to the third largest Latino voting bloc in the United States, with 3.4 million, making up slightly less than a quarter of the state’s electorate. The majority are either Cuban or Puerto Rican, which combined number 2.7 million out of a total Latino population of 5.8 million.

The Futuro poll confirmed what other polls have shown: that Latino voters are primarily swayed by economic concerns, especially independents.

Asked about their personal financial situations, 52 percent of Latino independents said they had worsened under the Biden presidency, with 59 percent saying they disapproved of Biden’s job in office.

“With the Republicans, even though we were not millionaires, we had some wealth that allowed us to live comfortably,” Cancio told Latino Rebels, a property of Futuro Media.

Most Latino independents in Florida say they’re focused on reducing the amount of their paychecks that goes to healthcare and utility costs. Fifty-six percent said they would be likely to vote for a candidate that supported public healthcare, compared to only 21 percent that said they would vote against such a candidate.

Overall, 57 percent of Florida’s Latino voters said they supported extending public healthcare to everyone, compared to only 22 who did not. And 58 percent supported investing in public energy for cheaper energy, while 21 percent were against it.

“There’s always more that can be done, but I feel like (DeSantis) has helped a lot of the Latino community over here in Florida,” Yalisa Grullon, an independent voter, told Latino Rebels.

While Grullon said that she still “has to do research” on Florida’s gubernatorial candidates, the issues that mattered to her most were women’s rights and education. The mother of a six-year-old daughter in elementary school said DeSantis’ “views on education are on par” with hers.

“I’m glad I don’t have kids that are school-aged, but I would definitely have them in a private school just because of what I am seeing,” said Mildred Preusser, a retiree and Republican-leaning independent, referring to liberal curricula.

Preusser and her cohort aren’t the only ones worried about education under Desantis’s reign. Latino Democrats also worry about the status of the education system, and their worries align somewhat with conservative independents.

Nayda Cartagena, a business owner, expressed concern with the “woke stuff” being taught in Florida schools.

“It really bothers me about what’s happening here in Florida with school regulations and censorship,” Cartagena explained. “The teachers’ hands are pretty much tied about what they can do and what they can’t do.”

Barely a month into his governorship, DeSantis redefined “public education” to include any school, including religious schools, that received public funding even through vouchers and similar programs.

“Public education is going to have a meaning that is directed by the parents, where the parents are the drivers because they know what’s best for their kids,” DeSantis said in February 2019.

The Latino voters in Florida interviewed by Latino Rebels expressed interest in controlling what their kids are allowed to learn in school, making sure the curriculum aligns with their values and priorities.

As expected, immigration remains a hot-button issue for Florida’s Latino voters, who themselves are mostly immigrants or the descendants of immigrants, largely from the Caribbean and South America.

Fifty-five percent of Latino independents said they were less likely to vote for a candidate who supported granting citizenship to immigrants without papers if they had not been convicted of a violent crime, compared to only 25 percent who would support such a candidate.

“I don’t like the open borders thing—definitely the biggest error this government’s had,” said Cancio, who immigrated from Venezuela 22 years ago. “It bothers me so much because we, the ones who pay taxes, are the ones who are paying for the consequences of these policies.”

While right-wing activists, politicians and their supporters regularly argue that the U.S. immigration system is too lax and its border with Mexico too porous, Biden’s border policies “are largely the same as those of President Donald Trump,” according to the Cato Institute, a libertarian think tank.

While Republicans and Democrats disagree on immigration reforms, multiple respondents mentioned the “high permeability” of the U.S.-Mexico border.

“The United States, based on the growth rate, needs immigrants but in an orderly fashion,” said Emilio Saenz, a school crossing guard.

Heavily criticizing “Trump’s fascist tactics of putting people in cages,” Saenz said he supported some type of immigration reform that would lead to more people entering the U.S. legally, though he was against people entering illegally.

Last month, in a political stunt meant to thumb his nose at the liberal bastions of the North calling themselves “sanctuary cities,” DeSantis bussed migrants from San Antonio, Texas to Martha’s Vineyard in Massachusetts—a move Preusser, the right-leaning retiree, described as “poetic justice.”

“I loved what Ron did,” Cancio said of DeSantis. “I loved that he grabbed these immigrants and threw them over there for the vice president of this country to deal with them.”

The two busloads of migrants sent to Vice President Kamala Harris’ residence in Washington, D.C. in September were sent by the Republican governor of Texas, Greg Abbott, not DeSantis.

Maria de los Coton, a Cuban immigrant, described the United States as “a nation of immigrants,” and said that DeSantis “has been mistreating them and using them for the disastrous policies that he has.”

Abortion is another polarizing issue for Florida’s Latino voters, with 51 percent saying they would vote for a candidate who was pro-abortion rights, compared to 36 percent who said they would not.

While close to half of Latino independents, 49 percent, were in favor of candidates who supported codifying Roe v. Wade into law to protect abortion rights, 31 percent said they would vote against such a move.

“Not considering any type of abortion is bad, but considering abortion up to birth is ridiculous,” Preusser said referring to late-term abortions, which many Americans believe the Democratic Party supports.

Most nurses and doctors only give abortions up to 12 weeks of pregnancy, with the exceptions who perform the procedure up to 24 weeks in rare cases for medical reasons, according to Planned Parenthood. Current abortion laws in Florida allow people to get abortions up to 15 weeks and six days.

“It’s mainly moral issues that I feel the Democratic Party has all of a sudden gone too far for me,” Preusser said.

“I’m not there [in Puerto Rico] to vote, but if I was there to vote I’d be voting pro-statehood,” said Preusser, who lived in Puerto Rico for years before moving to Florida.

Statehood is the top choice among Florida’s Latino Democrats as well, with multiple Democrats saying they would like to see Puerto Rico become the 51st state.

Cartagena, who was born in Puerto Rico but moved when she was three years old, wishes Puerto Ricans outside the archipelago could vote in a territorial status referendum, but she does not see that becoming a reality anytime soon.

Many respondents attributed DeSantis’ popularity and Florida becoming redder to strong messaging from the candidate and his party, saying it resonates with the traditional Latino values that younger generations have tried to shake but which older generations still hold dearly.

Republicans, for instance —and the men specifically— tend to portray themselves as manly strongmen, which strikes a chord with many adherents to machismo, which promotes traditional views on manhood and gender roles.

“So many years with dictators has turned us (Latinos) into having a mentality where we have a little dictator inside of us, and it’s a great problem for democracy,” Saenz, whose family hails from Venezuela and Cuba, told Latino Rebels.

He also mentioned that Republicans tended to portray themselves as “populist leaders,” which resonates with many Latino communities.

Many of Florida’s Latino Democrats attribute the lower favorability rating received by their party as a sign that Democrats have not done enough to reach Latinos in the state. Demings’ low recognition likely stems from this failure, with multiple people telling Latino Rebels that they were only voting for Demings because she was a Democrat, not because they knew her policies.

Given that Florida is slowly becoming less a battleground state and more solidly Republican, liberal and left-leaning Latinos are weighing their options on whether to stay or go.

“I like Florida, I like the weather, and I really would like to stay here and my kids are here,” Cartagena told Latino Rebels. “If we could have a change in administration, that would be wonderful. But I don’t see that as a likelihood right now.”