Latino Voters in Pennsylvania Back Fetterman in Futuro Media Poll 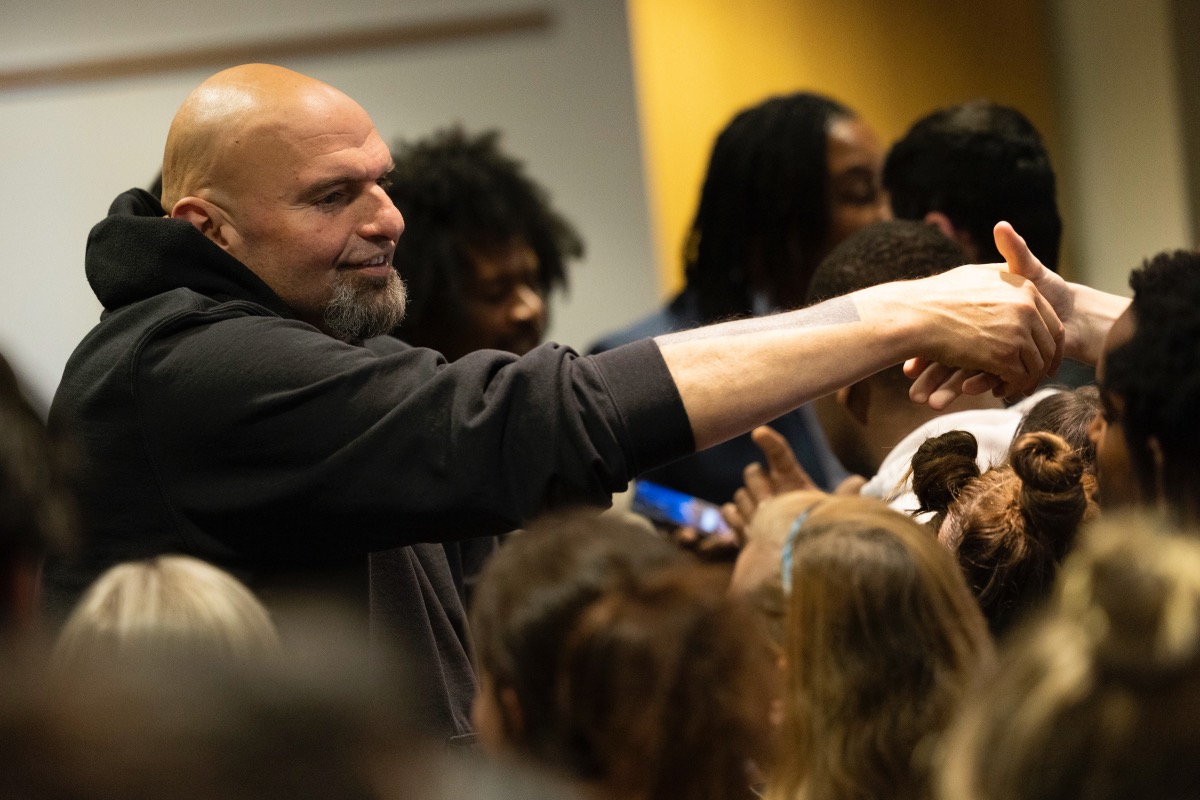 Pennsylvania Lt. Gov. John Fetterman, a Democrat, has broad support among Latino Democrat and independent voters in the state’s hotly contested race for the U.S. Senate, according to Futuro Media’s first-ever poll of Latino voters.

The seat is currently held by a Republican, Pat Toomey, who is retiring.

Fetterman is facing up against Dr. Mehmet Oz, a former television celebrity physician and Trump favorite, in a contest that could determine the balance of power in the Senate.

Among poll respondents, Fetterman had a favorability rating of 49 percent. Oz’s, meanwhile, registered at only 26 percent.

The Futuro Media poll, conducted by IZQ Strategies for Futuro Media from October 6 to 11, surveyed 294 registered Latino voters in Pennsylvania through web and text messages in both English and Spanish. Respondents were asked to weigh in on the issues that mattered the most to them and the candidates they would be voting for in the midterm elections. The poll had a six percent margin of error.

Half of the respondents said they identified as Democrats,  24 percent as Republicans, and 26 percent said that neither party represented them.

According to Pew Research Center, Latinos make up 8.4 percent of the population of Pennsylvania—slightly over one million people. Of those, only 580,000 are eligible voters.

The majority of Pennsylvania’s Latino population is made up of Puerto Ricans, numbering more than 450,000 people. Dominicans make up the second largest bloc with over 180,000, and Mexicans are the third largest nationality with more than 170,000.

A Different Kind of Democrat

Since starting his senatorial campaign, Fetterman has been publicly outspoken about his progressive stance on social issues like healthcare as a human right and legalizing marijuana. Many poll respondents who spoke to Latino Rebels in follow-up interviews said such stances made Fetterman stand out. Part of his appeal also comes from the unpretentious attitude he projects, favoring hoodies and basketball shorts over suits and ties.

But there is something else about Fetterman that is more important to Rugh: his commitment to uplifting the trades across Pennsylvania. As mayor of Braddock, Fetterman attempted to revitalize the once prosperous steel town left behind by industry, launching youth programs among other endeavors. While the town is home to many critics of the aspiring senator, it is also the site of some of his earliest endorsements from two important Pennsylvania unions: United Food and Commercial Workers Local 1776, and United Steelworkers District 10.

“I think he’ll follow up on the infrastructure investment,” Rugh said. She is also hopeful that Fetterman getting elected would lead to “rebuilding the middle class” and getting more people into the trades in the state.

At 82 percent, Fetterman’s support among Democrats is overwhelming. By comparison, 43 percent of independents and 13 percent of Republican respondents said they would support him.

Part of Fetterman’s recent campaign has been convincing people that his ability to lead as a senator would not be affected by a stroke in May. After his debate with Oz on October 25, supporters voiced concern that his performance would affect undecided voters’ willingness to come out for him.

“(Fetterman’s) health risks kind of worry me,” said college student Jonnathan Robles, who thinks neither party represents him. “If he gets another one (a stroke) in office, he might not even be in office for a full term.”

All About the Money

Unlike Florida and Georgia Latino voters, voters in Pennsylvania don’t feel as negative about their economic situation. A majority of poll respondents said they felt their financial situation had improved (19 percent) or stayed the same (40 percent) since President Biden took office.

Biden’s job approval was also at a high 57 percent among the state’s Latino voters, according to the poll.

Besides the economy, healthcare and energy figured among the issues most important to Pennsylvania’s Latino voters.

Roughly three in four say they would vote for a candidate who supported expanding public healthcare to cover everyone. Sixty-four percent say they support investing in publicly-owned renewable energy to reduce the cost of energy, while 18 percent say they oppose it.

“I’ve had my power cut off more times than I can count just because I haven’t been able to pay the bill,” Zachary Delrio, a poll respondent who identifies as libertarian, told Latino Rebels. He added that the high prices of electricity and other costs have made him seriously consider moving out of Pennsylvania several times.

Fetterman has said that he supports investing in green energy, but he has also held conflicting positions on fracking, one of the engines of Pennsylvania’s economy. During the Tuesday debate against Oz, he said he had always been in favor of fracking, though he said in 2018 that he “never” would support it.

In the age of post-Trump politics, immigration remains one of the most polarizing issues for many across the United States. A slim majority of Pennsylvania’s Latino voters (51 percent) support granting citizenship to all immigrants without papers that haven’t been convicted of a violent crime, contrasted with 33 percent who oppose such a measure.

“My wife was trying to emigrate from Canada and almost got deported twice because paperwork we filled out wasn’t getting sent to us in time,” said Delrio, who supports “making immigration a much simpler process” by streamlining the process for becoming a U.S. citizen.

Fetterman’s wife Gisele was born in Brazil and brought to the United States by her mother alongside her younger brother, all as undocumented immigrants. Mrs. Fetterman eventually received her green card in 2004 before becoming a citizen in 2009, a year after she married Fetterman.

Late last month, she kicked off a “Latinos for Fetterman” tour across several Pennsylvania communities with large Latino populations.

“Americans don’t want to take responsibility for what we did in Latin America,” Rough told Latino Rebels. She specifically referred to the Western Hemisphere Institute for Security Cooperation at Fort Benning, Georgia, formerly known as the School of the Americas, where multiple death squads and 11 future dictators were trained by the U.S. military.

More than half of the Latino voters polled (57 percent) said they were supportive of codifying Roe v. Wade into law to protect abortion rights, while 23 percent said they would vote for a candidate who opposed it.

“Me and my husband should have control over decisions that affect our– my health but also our health as partners, and I don’t need a bunch of dudes telling me how to do that,” Rugh, who works for a local union, said.

Abortions in Pennsylvania are legal up to the 23rd week of pregnancy, according to the Office of the Pennsylvania Attorney General.

“We need a Democratic governor in there to veto any radical (anti-)abortion laws that may come up,” Alejandro Bastidas, a Democrat, told Latino Rebels.

Both Shapiro and Fetterman have consistently campaigned on keeping abortion accessible to those who wish to have one.

Given Pennsylvania’s large Puerto Rican population, decolonization options for the five inhabited U.S. territories enjoyed more attention than they did in other states polled.

Sixty-two percent of respondents polled were likely to vote for a candidate that supported some type of decolonization, whether independence or statehood, for Puerto Rico and other U.S. territories. Only 15 percent said they would oppose such a candidate.

“It’s a shame that the people of Puerto Rico can’t have representation,” Bastidas, a Colombian immigrant, told Latino Rebels. He supports a binding referendum for Puerto Rico and wishes to see it become the 51st state, but thinks that Republicans would never allow it to become a state.

Many respondents Latino Rebels talked to said they would like to see Puerto Rico become the 51st state if that is what Puerto Ricans voted for, but many thought Puerto Rican statehood was unlikely to happen in the near future.

At the Ballot Box

While Fetterman has a heavy lead among Latino voters, they only make up a small portion of the electorate, which explains the thin margin between him and Oz. According to a recent AARP poll, Fetterman enjoys 48 percent support among likely voters contrasted with Oz’s 46 percent.

Meanwhile, though the state’s close Senate race has received the most national attention, the gubernatorial race between Josh Shapiro and his rival Doug Mastriano is just as important for many Pennsylvanians.