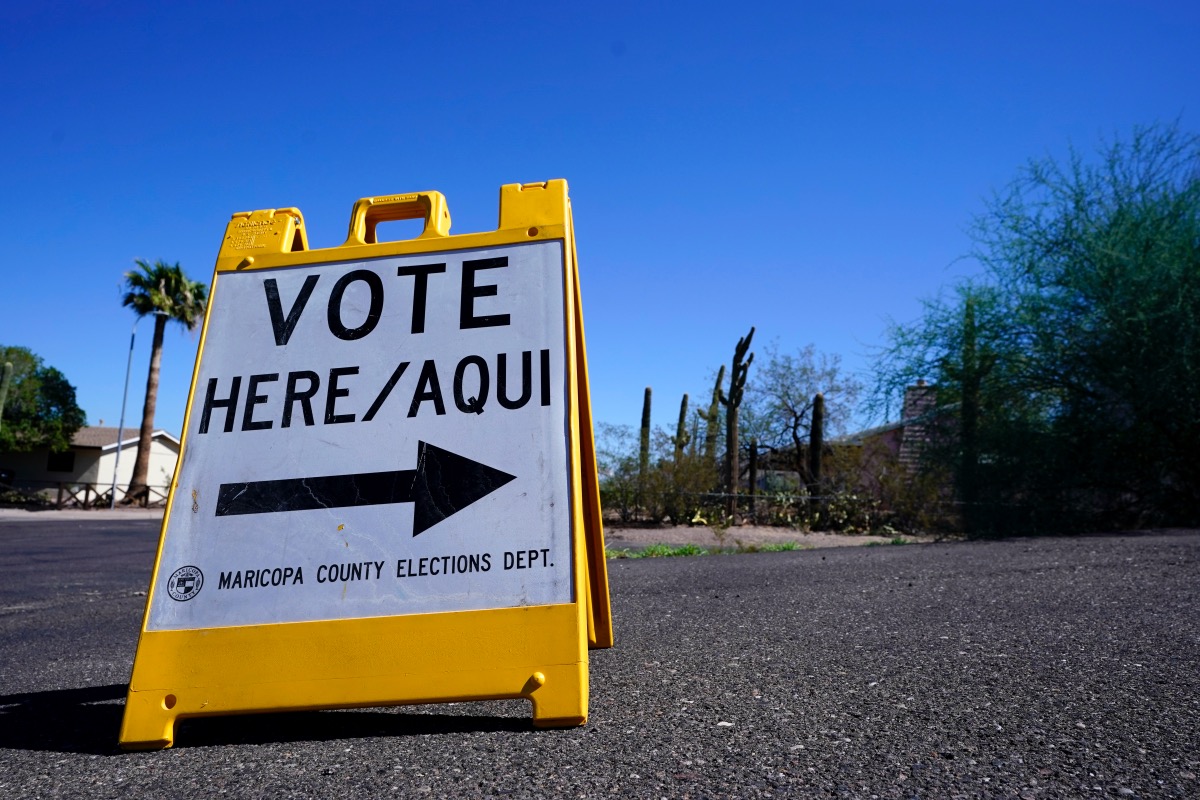 A sign marks the entrance to a voting precinct on the first day of early voting in the general election in Phoenix, October 12, 2022. Arizona Latinos responded to a tough crackdown on immigrants by building a turnout machine that helped propel Democrats to power. The movement’s strength will be tested Tuesday, when Democrats are counting on Latino voters to help them overcome economic worries. (AP Photo/Ross D. Franklin, File)

GUADALUPE, Arizona (AP) — Over the past decade, Latinos in Arizona responded to a tough crackdown on immigrants by building a turnout machine that helped propel Democrats to power, turning a longtime Republican stronghold into one of the most competitive states.

The strength of that movement will be tested in Tuesday’s election, when Democrats are counting on strong support from Latinos to help them overcome concerns about the economy.

It comes as Democrats worry that their standing among Latinos is slipping. The party suffered surprising losses in 2020 in places such as South Florida, where immigrants from Cuba and Venezuela tend to be more conservative, and South Texas. In Arizona, where Latinos tend to be younger and more recent immigrants, they may prove decisive in the battle for control of the Senate and in a crucial race for governor.

“The question is, will young Latino voters come out and vote? Because that actually is what probably will determine whether we’re going over the top or not,” said Ruben Gallego, a Democrat congressman who represents largely Latino neighborhoods in south and west Phoenix.

Democratic Sen. Mark Kelly is counting on those Latino voters to help him repeat his victory in a special election two years ago. So is Katie Hobbs, the nominee for governor, as Democrats try to win the state’s top office for the first time since 2006.

Latinos, roughly one-third of Arizona’s population, accounted for less than one-fifth of voters in 2020, but they have long favored Democrats with their support. The same is true in Nevada, where Catherine Cortez Masto, the first Hispanic woman elected to the Senate, is one of the chamber’s most endangered Democrats.

That’s not necessarily cause for alarm, Gallego said. In the 2018 midterm elections, young Latinos waited until the last minute to vote or return their mail ballot, he said. They ultimately helped deliver a victory for Kyrsten Sinema, the first Democrat to win an Arizona Senate race in two decades.

Donald Trump made inroads in his 2020 presidential run, increasing his share of the Latino vote to 38 percent from 28 percent in 2016, according to an analysis of validated voters by the Pew Research Center.

It wasn’t enough to reelect Trump, but gains among Latinos helped the GOP pick up seats in Congress, particularly in South Texas and Florida.

In Arizona, young Latinos organized in the aftermath of a 2010 law that required police to check the immigration status of anyone they suspected to be in the country illegally. The measure was the catalyst for a wave of legislation around the country cracking down on immigrants.

Leaders of that movement now hold prominent positions: Gallego is in Congress, and Raquel Terán is a state senator and chair of the Arizona Democratic Party.

Latinos are an integral part of the coalition that has pushed Arizona into winnable territory for Democrats, but they can’t deliver the state on their own, said Brendan Walsh, co-political director of Unite Here Local 11 and its affiliated political group, Worker Power.

“If we get Latinos to perform as we want them to but we lose ground in the suburbs, we lose,” Walsh said. “But there’s no amount of votes we can pick up in the suburbs that makes up for a drop off in Latino voters. We need it to be terrific in order to win.”

Unite Here’s hotel and food service workers are canvassing six days a week, focusing on turning out Black and Latino voters who have said they support Hobbs and Kelly but might need an extra push to vote, he said.

“We are out there really digging in to find new supporters, but also to make sure that the people who told us in the last few weeks that they’re Hobbs supporters are going to vote,” he said.

Republicans think rising prices and economic anxiety give them an opening to make the case to Latinos that they cannot afford Democratic leadership. Republicans worked aggressively to tie Democratic candidates to President Joe Biden, who is unpopular in Arizona. He has not been in Arizona as part of his late election swing, though First Lady Jill Biden campaigned in the state on Saturday for Kelly and Hobbs.

“Hispanics care about jobs. They’re against inflation. They want a secure border,” Republican Sen. Rick Scott of Florida, who leads the Senate GOP’s campaign arm, said after an event last month at a Latino outreach office for the party in Phoenix. “They want their kids to get a good education. Hispanics are fed up that the public school system wants to teach their kids critical race theory.”

Democrats point to GOP Senate nominee Blake Masters’ opposition to a path to citizenship for “DREAMers,” young people brought to the country illegally as children. Democrats also cite his promotion of the racist conspiracy theory that Democrats are using immigration to replace Americans.

Masters said his focus on border security resonates with most Latinos.

“The Latino voters I talked to are sick and tired of the wide open southern border,” Masters said. “These folks are excited to vote Republican this November. They came legally. This country welcomes immigrants when you come legally, but the correct amount of illegal immigration is zero.”

In the governor’s race, Lake has grabbed onto a moment from Hobbs’ appearance at a candidate forum sponsored by the U.S. Hispanic Chamber of Commerce. Asked what she’s learned from the Latino community, Hobbs froze and struggled through an awkward answer mentioning she enjoys “practicing my español” with her Latina sister-in-law.

“She stuttered and stammered her way through a softball question of what has she learned from the Latino community. She couldn’t come up with one thing,” Lake said at a news conference last month.

Asked to answer the question herself, Lake said her husband and daughter are Latino.

“They’re the most hardworking, devoted to their family,” Lake said of Latinos. “They show us that there’s a balance in life. When you put your faith in God, you love your family, you work hard, you can have that American dream.”

Hobbs has prioritized outreach to Latinos in the final weeks. She spent a weekend touring Latino communities and last week met with Latina business owners.

“You can’t separate Latino culture from Arizona and who we are as a state,” Hobbs told the Associated Press. “I thought a lot about people I worked with in my career as a social worker and the things I’ve learned particularly from Latina women I had a chance to work with at the domestic violence shelter.”

Hobbs was a social worker and a leader of a domestic violence shelter before turning to politics in 2010, when she was elected to the state legislature. She’s now Arizona’s secretary of state.

For Felipa Alvarez of Guadalupe, a small Latino and Indigenous community a few miles from where Hobbs grew up in Tempe, no amount of outreach from Lake can overcome her embrace of Trump.

“In my opinion Kari Lake is Trump’s puppet,” Alvarez said. “When Trump endorsed her, forget it, you’re out of the picture for me.”