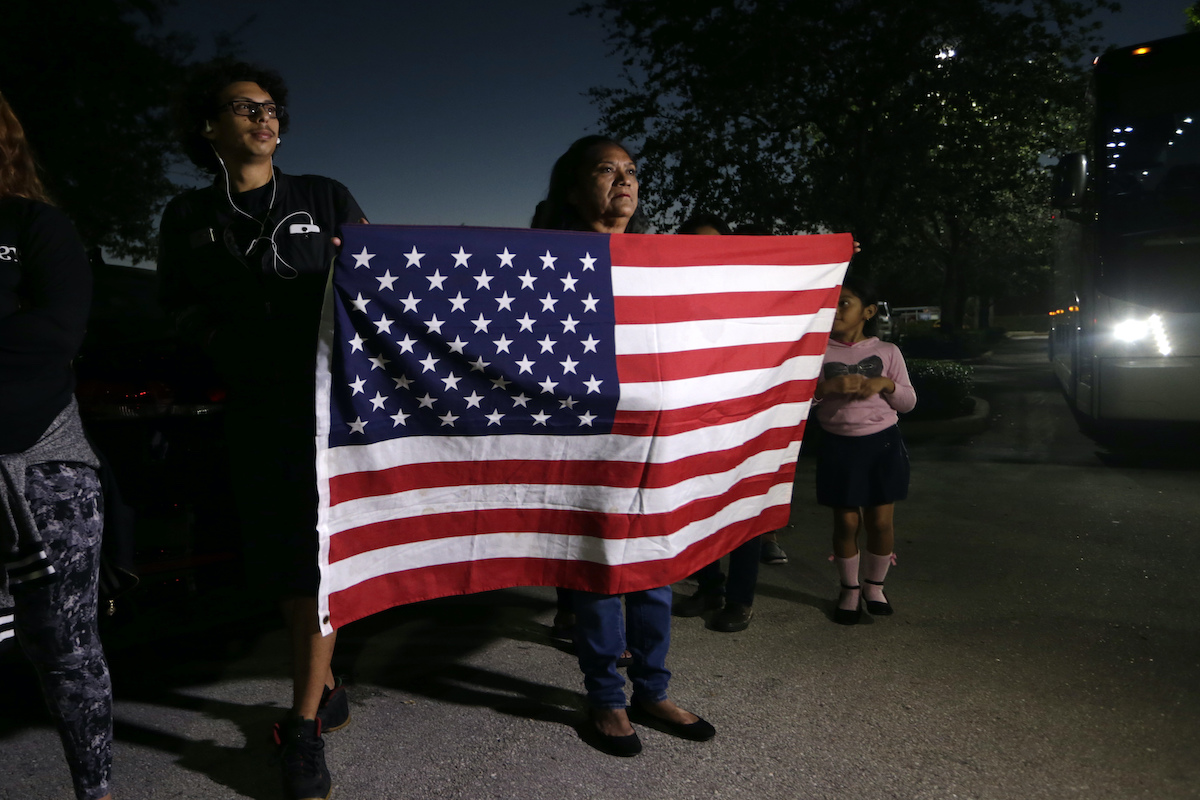 Activist Antonia Catalon holds an American flag during a rally in support of immigrants who came into the U.S. as children, outside of the office of Sen. Marco Rubio, R-FL, Tuesday, November 7, 2017, in Doral, Florida. (AP Photo/Lynne Sladky)

SOUTH FLORIDA — Deferred Action for Childhood Arrivals, commonly known as DACA, has been in place for 10 years now. That’s a long time, enough to truly establish roots in a community.

It’s enough time to buy a home. To finish high school. Earn a college degree. Develop a career. Get married. Start a family. Open a business.

Those are just some of the things that DACA allowed DREAMers like myself to accomplish in the last decade. After living under the constant fear of deportation for years, being protected from deportation and having a work permit gave me the opportunity to thrive in this country and build a career that allowed me to become financially secure enough to live a happy life with my young daughter.

Unfortunately, the program, which currently protects some 610,000 people, is under severe threat due to efforts by Trump-appointed judges to gut the program. A recent ruling in the 5th Circuit Court of Appeals declared DACA unlawful, returning the case to Judge Andrew Hanen of Texas, who has repeatedly ruled against it, to reconsider his ruling in light of the Biden Administration’s new rule on DACA.

DACA recipients have for years lived from court case to court case, filled with anxiety and fear that the protections we have enjoyed may be stripped away from us indiscriminately and that everything we have achieved and built in this country can be taken from us. It’s inhumane and cruel. We don’t deserve to live like this.

As someone residing in Florida, a state that has benefited greatly both culturally and economically from its large immigrant population, I would expect my U.S. senators to advocate for the well-being of DACA recipients like myself but, unfortunately, Republican Sens. Rick Scott and Marco Rubio are not only missing in action, they are actively obstructing and harming any chance for a legislative solution to this ordeal.

That’s why I decided to speak up and join the Service Employees International Union’s “We Decide” campaign.

Watching Rubio, the son of immigrants from Cuba, is particularly disappointing. He was not always on the anti-immigrant Trump train, but was in fact part of the “Gang of Eight” efforts to pass immigration reform back in 2013, before turning his back on his own bill and urging Republicans in Congress to vote against it after receiving pressure from Tea Party extremists. He did this despite a voicemail from his mother pleading with him not to “mess with the immigrants.”

Since then, Rubio has gone full nativist, voting against legislation that would have “provided 1.8 million Dreamers a chance for citizenship.” He has since refused to support similar legislation, and his 2022 reelection campaign has used extremist nativist language, referring to migrants as an invasion and spreading lies that his opponent Val Demings wants to allow undocumented immigrants to vote.

It’s sad to watch Rubio, once a supporter of DREAMers like myself, turn his back on us because he is too weak and cowardly to stand up to Donald Trump and his MAGA supporters.

Too many Republican elected officials like Rubio have cravenly embraced Trump’s disdain for immigrants and obstructed good-faith efforts to address our broken immigration system. We need Republicans like Marco Rubio to remember his immigrant roots and do the right thing. They need to walk the walk and join people from both parties in passing bipartisan legislation by the end of the year that will provide all DREAMers with the pathway to citizenship they deserve.

Protecting DACA recipients is supported across the political spectrum, with a full 65 percent of voters in battleground states —including 60 percent of swing-state voters and 78 percent of Latino voters— supporting Congressional action that would protect DREAMers regardless of what the federal courts might decide on the DACA program.

People like me and my family members need action this year. Marco Rubio and his fellow Republicans must stop the political games and work in a bipartisan manner to either protect DREAMers, or be responsible for the demise of a program that has changed lives, strengthened our nation, and reflected the best of who we are as a people.

Lorena Jofre is a DACA recipient from Chile who resides in South Florida.