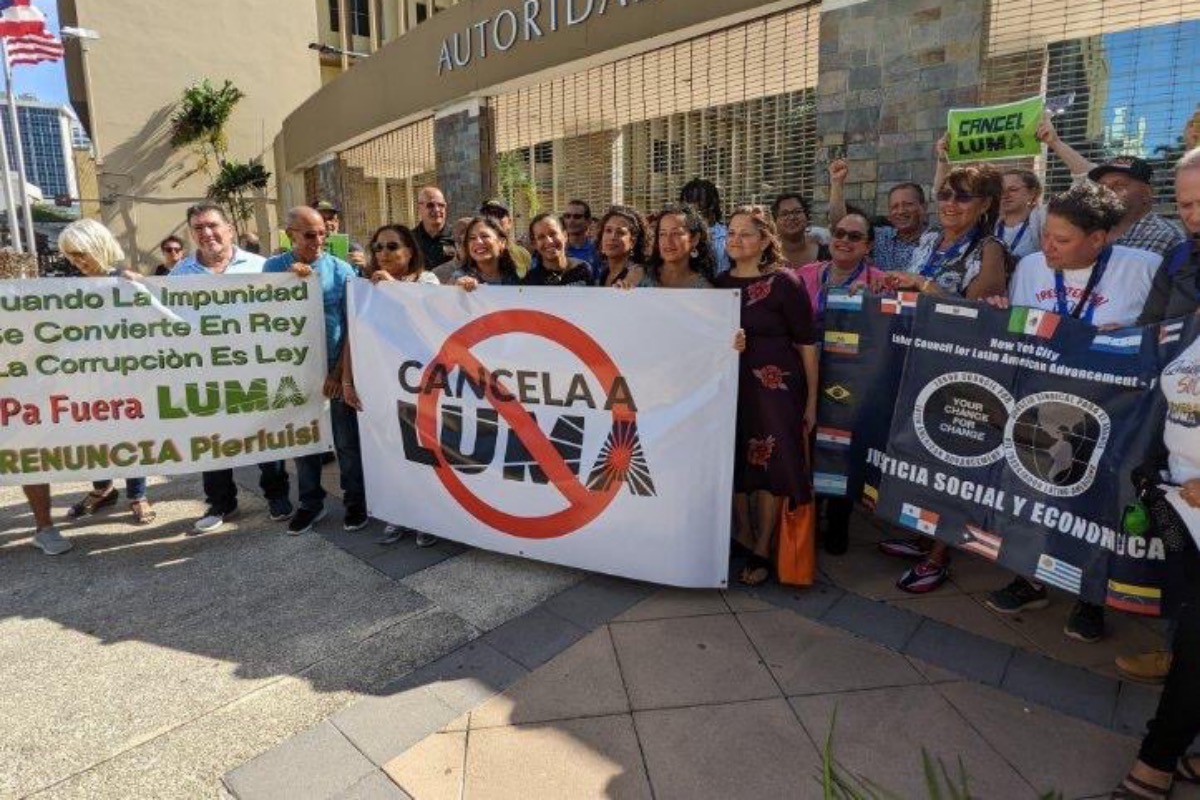 New York lawmakers and local activists gather outside the headquarters of LUMA Energy to protest against the company and the possible extension of its government contract, in San Juan, Puerto Rico, Thursday, November 10, 2022. (Tiffany Cabán/Twitter)

SAN JUAN — Teachers and electrical workers in Puerto Rico are calling for a protest outside schools on November 30 —the day that LUMA Energy‘s contract is set to expire— in hopes that the government cancels the company’s impending 15-year contract.

At a press conference, the Teachers’ Federation of Puerto Rico, UNETE, and members of the Electrical Industry and Irrigation Workers Union (UTIER, in Spanish) called for teachers to protest outside their schools, at either 8 a.m. or midday, to pressure Gov. Pedro Pierluisi into not signing a 15-year contract with LUMA while allowing the current contract to expire.

They also asked that the government seek alternative ways to ensure efficient electrical service for the people of Puerto Rico.

“Faced with the accelerated privatization of essential services and constant attacks on teachers, we must ask ourselves why the Dr. Pedro Albizu Campos High School here in Toa Baja —where we are here right now— has its students taking classes virtually. The answer is two-pronged: LUMA and the excessive bureaucracy as a consequence of privatization,” said Teachers’ Federation President Mercedes Martínez Padilla.

Students at the high school in Toa Baja have been taking virtual classes for over four weeks due to the school’s lack of electricity. Class periods have also been shortened down to 30 minutes, cutting down the time students have to learn.

Some teachers and mothers of students accompanied the union members during the press conference.

“Students are uncomfortable, they complain, their parents complain,” teacher Adriana Piñeiro said about the 30-minute class schedule they were running when they were still doing in-person classes. They shifted to a virtual schedule last Friday that allows them to have a full school day, but they say that virtual classes deprive students of the necessities given to them by schools, like school lunches and socialization.

Dr. Pedro Albizu Campos High School is one of four schools the speakers pointed to when explaining how the privatization of the electrical grid has affected the archipelago’s educational system.

Republica de Colombia High School in San Juan has experienced serious voltage problems since August, causing it to establish an interlocking schedule. The Antonio Reyes Vocational School in Utuado has also had voltage issues, greatly affecting the use of their workshop rooms.

Meanwhile, Rafael Rivera Otero Elementary School in San Juan has not had electricity since August.

“Now, since the privatization of the distribution of electricity, there’s a ‘hot potato’ between LUMA and OMEP, the Office of Management of Public Buildings,” Marinez Padilla said. “Bureaucracy swallows the possibility of a quality physical education, and teacher working conditions are made worse.”

Even though the school’s teachers and administrators have made calls to LUMA and OMEP, they claim that red tape between the two, where one refused to acknowledge work the other had to do and vice versa, has left educators and parents in the dark.

Since LUMA took over the distribution, repair, and maintenance of Puerto Rico’s electrical grid, people have experienced a marked increase in the number of outages and blackouts.

Provisions in the potential 15-year contract with LUMA —set to go into effect when the current one expires— state that a debt adjustment plan for the publicly-owned Puerto Rico Electric Power Authority must be in place before the long-term contract goes into effect, which is why the current contract is only provisional.

According to the legal calendar set by New York District Court Judge Laura Taylor Swain, who is overseeing Puerto Rico’s debt restructuring, the earliest point when the parties involved could come to an agreement would be in the summer of 2023.

Although Gov. Pierluisi stated that LUMA was “on probation” after a string of outages earlier this year, he and his administration have remained firm in that LUMA will stay in control of Puerto Rico’s power system after the November 30 deadline.

“On December 1, LUMA will be in charge of Puerto Rico’s electrical grid,” he had previously said, adding that “canceling the LUMA contract would be madness.”

For their part, LUMA has always maintained that they will be in charge of the Puerto Rican electrical grid and that the 15-year contract would be signed. But the company has not publicly said much about its contractual status with the Puerto Rico government.

Multiple groups, including New York lawmakers, environmental activists, and community groups, have called for the government not to renew the contract with LUMA, while ensuring a public energy solution with reduced prices.