The recent controversy surrounding ABC's 'Work It" sitcom has created a social media firestorm and tomorrow, Sunday January 8, in Chicago, a film crew is inviting all people of Puerto Rico to educate and let people know that they don't sell drugs. Here are the details from Puerto Rican actor Darlene Vazquetelles, and director Carlos Jiménez, who recently formed the nonprofit Puerto Rican Alliance for Awareness (PRAA): 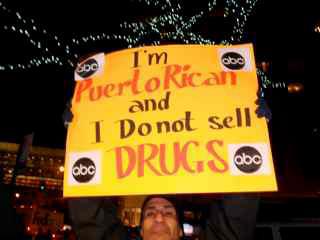 Right now I am in Chicago filming a movie. The director of the movie is also Puerto Rican and after discussing what happened [this week on ABC] we decided to do something about it.

This weekend we have off from filming so we have decided to do a mini-documentary in protest of what happened. The way we are doing it is by putting every Puerto Rican we know and come across here in Chicago in front of the camera stating their names, occupation and stating that they do not sell drugs.

This will be airing on You Tube. We already have the support of the Puerto Rican Parade Committee of Chicago. We are also receiving videos from all over the USA and Puerto Rico through email which will be included in the video.

For those who cannot be there, we are asking them to send us videos to carlosjimenez88@yahoo.com. (IMPORTANT: For the people that will be sending videos, please put camera in horizontal position and send by tomorrow Sunday at 11 pm Central Time with no background sounds like tvs or people talking.)

We are asking them to do it ASAP as we will be editing all day on Monday.

We already have press interested and covering the event.