115 Years After US Troops Landed in Puerto Rico, the Narrative for Island’s Future Must Change Immediately

On July 27, 1898, The New York Times published the story of US troops landing in Guánica, Puerto Rico two days earlier on July 25. It was part of the Spanish-American War, which pretty much ended two weeks later on August 12, 1898, when a cease-fire was established. The Times’ headline read “Our Flag Raised in Puerto Rico.” 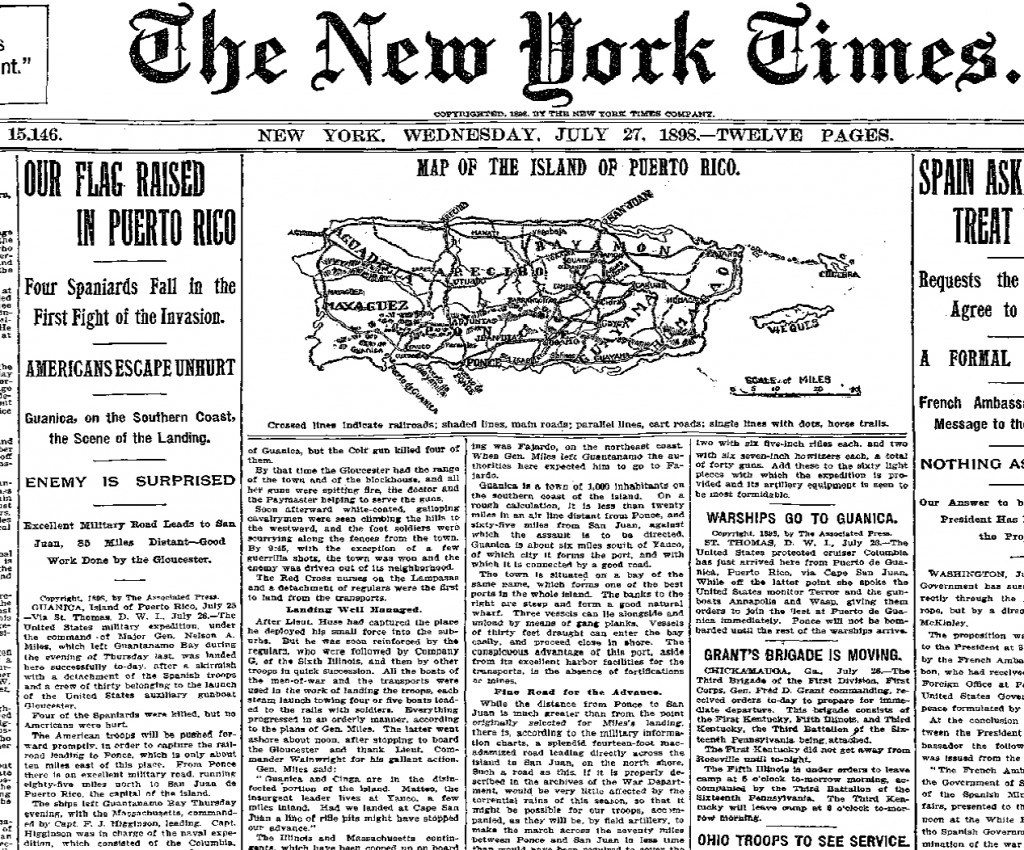 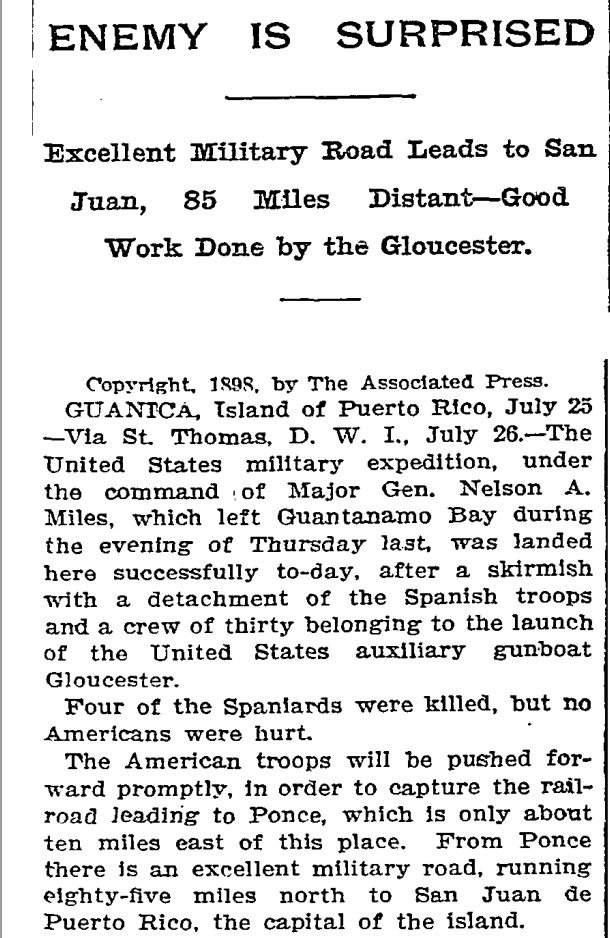 Like I said in an opinion essay published last Saturday for The Boston Globe, Puerto Rico is still “stuck in the same spinning wheel it has been experiencing ever since American troops landed in Guánica 115 years ago.”

Ironically, July 25 is also Puerto Rico’s Constitution Day, which is what the island’s current government is pushing today: a celebration of the Estado Libre Asociado, the commonwealth that is not a commonwealth, and the current territorial relationship 54% of those who voted last November rejected. That official social media narrative of Constitution Day can be found under #AniversarioELA, and it is no surprise that it is being mocked. For example, just check out the parody Twitter account of @aparciagadilla, which makes fun of the island’s governor and pro-status quo supporter Alejandro García Padilla.

As is typical of Puerto Rican politics, the official narrative is trying very hard to stay relevant, when in fact a new and authentic social media narrative is winning the day. When I wrote my Globe piece last Saturday, I was not surprised that the piece resonated with many fellow boricuas, from San Juan to San Francisco. It even got reported in Puerto Rican press. Little by little, the new narrative is becoming the authentic narrative: a REAL dialogue that is inclusive of all Puerto Ricans, no matter their views on political status and how to resolve the island’s colonially convoluted relationship with the US.

I am fully convinced that the vast majority of Puerto Ricans are tired of the same old politics. Tired of a governor who continues to ignore colonial reality, as well as tired of a pro-statehood resident commissioner who is trying extremely hard to achieve the utopian dream of statehood through raw partisan politics. Ironically, both Garçía Padilla and Pedro Pierluisi, the resident commissioner and a non-voting member of Congress, are aligned with the Democrats. But when it comes to political status, it looks like a fight between the Tea Party on one side and the Left on the other. Talk about extremes among people who might actually have more in common politically than most.

García Padilla and Pierluisi are just the latest act of the Puerto Rican Political Status Follies, running continuously ever since Luis Muñoz Marín stopped being a Nationalist and started seeing the power he would gain from creating a “commonwealth” with the US.

And who keeps losing form all this political sniping? The people of Puerto Rico.

This frustration applies as well to Congressional leaders of Puerto Rican descent who actually have a vote in Washington. Just this week, both Nydia Velásquez (D-NY) and Luis Gutiérrez (D-IL) spoke out against the statehood bill Pierluisi introduced. To say that I am disappointed is an understatement. Their views are exactly what I rejected in my Globe piece: let’s hold another non-binding plebiscite about status. And you wonder why Puerto Rico is still in political limbo? Even when we have Puerto Ricans in Congress who can vote, they are quick to suggest a method that has been overplayed and abused. The never-ending cycles of plebiscites have achieved nothing. Enough is enough.

So I wonder: will Puerto Rico wake up? Do we have the political will to no longer rely on political games and take this matter in our own hands? I leave you with the conclusion I wrote earlier this week:

The island does not need any more nonbinding plebiscites. It doesn’t need statehood bills that have little chance of passing in Congress. It needs leaders who realize that the political status game must disappear.

There is really only one solution. Puerto Ricans from both the island and the mainland should call for one more binding vote with two choices: statehood or independence. The United States must honor the results. That is the only way for Puerto Rico to settle its colonial past.

The time to act is now.

115 years have passed, yet we Puerto Ricans are still given manufactured narratives, when almost every boricua I know believes that if we don’t fully resolve our political identity now and shed our colonial tendencies, we will likely never will.

Julio Ricardo Varela (@julito77 ) founded LatinoRebels.com in May, 2011 and proceeded to open it up to about 20 like-minded Rebeldes. His personal blog, juliorvarela.com, has been active since 2008 and is widely read in Puerto Rico and beyond. In the past 12 months, Julito represented the Rebeldes on Face the Nation, NPR, Univision, Forbes, and The New York Times.

One response to “115 Years After US Troops Landed in Puerto Rico, the Narrative for Island’s Future Must Change Immediately”