After meeting with Guatemalan President Otto Pérez Molina, Salvadoran President Salvador Sánchez Cerén and Honduran usurper Juan Orlando Hernández, Obama delivered a statement to simultaneously convey his heartache over the child refugee crisis and assure the far right that he would get rid of the children as quickly as he could.

[W]e have to deter a continuing influx of children putting themselves at great risk and families who are putting their children at great risk. And so I emphasized that within a legal framework and a humanitarian framework and proper due process, children who do not have proper claims and families with children who do not have proper claims, at some point will be subject to repatriation to their home countries.

I say that not because we lack compassion, but because in addition to being a nation of immigrants we’re also a nation of laws. And if you have a disorderly and dangerous process of migration, that not only puts the children themselves at risk, but it also calls to question the legal immigration process of those who are properly applying and trying to enter into our country. 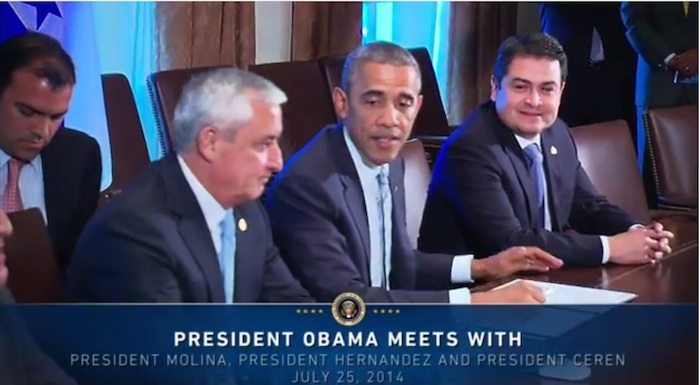 First, the president believes the influx of women and child at the border amounts to what he has described in his lawyerly parlance as an “urgent humanitarian situation,” not on the basis of them fleeing a blood-soaked region, but because the trek itself is dangerous. He seems to be under the assumption that the people undertaking such a treacherous journey are unaware of the hazards involved and are needlessly risking their lives for a chance at a better life.

Which brings me to my second point.

President Obama still refuses to see these women and children as refugees instead of mere migrants seeking opportunity. He understands that Honduras, for example, is plagued by extreme poverty, gang violence and government corruption, but as he sees it, poverty, violence and corruption are not reasons enough to designate anyone leaving that country a refugee. Obama refuses to acknowledge just how said conditions have combined and exploded to such levels as to transform Honduras into a war zone.

As a result of the Displaced Persons Act of 1948, and with the goal of undermining global communism, the United States took in hundreds of thousands of people escaping the Eastern Bloc countries (Central and Eastern European countries controlled by the Soviet Union), as well as the people of North Korea and China. The United States also accepted over 1.2 million Vietnamese, Cambodians, Laotians, Hmong and Southeast Asians seeking asylum following the establishment of communist regimes in Indochina after 1975.

During the Mariel boatlift of 1980, the U.S. government welcomed and, through the U.S. Coast Guard and Marines, assisted over 120,000 Cubans who sailed to Florida from Cuba in the span of six months.

Of course, there also have been plenty of instances wherein the U.S. government has turned its back on asylum seekers, most infamously the rejection of 937 Jews aboard the St. Louis in 1939 and the visa denial of Anne Frank’s family.

Now with tens of thousands of child asylum seekers fleeing the violence aggravated by repressive regimes (in the case of Honduras specifically), you’d think the U.S. government had been embarrassed enough by its past sins to do the right thing this time around.

For much of the Cold War, the United States only offered asylum to two types of people: Europeans and people escaping communism. These days asylum is still granted to people escaping communism —Chinese supplicants made up 34 percent of those granted asylum in 2012— followed by Egyptians, Russians, Iranians and other people from countries generally antagonistic toward United States.

It should come as no surprise, too,  that the U.S. government has granted more asylum to Venezuelans in recent years than to asylum seekers in any other country in Latin America. And there’s still the government’s “wet foot, dry foot” policy toward Cubans, allowing any Cuban who sets foot on U.S. soil to remain in the country indefinitely.

In light of all of this, and his comments on Friday, it would then appear as though President Obama didn’t consider the recruitment of Honduran and Salvadoran children by gangs as desperate as the recruitment of Cuban and Venezuelan children by communists, nor the human rights abuses committed by the Honduran government as egregious as those committed by the Egyptians.

Apparently the U.S. government doesn’t grant asylum to people wanting to leave the banana republics that Washington put so much time, effort and money toward maintaining in Central America. The United States owns a big share of the blame for why Central America is so hostile today, and therefore it’s easy to see why the government is reluctant to recognize just how bad it really is.

The child refugees of Central America first need his understanding.