After publishing a story last night about members of the Border Convoy allegedly carrying firearms in El Paso during their eight-day “Stop the Invasion” rally, images from a local Univision 26 report showed a convoy member carrying what appear to be a rifle or an automatic weapon. The following video is in Spanish. A rough English transcript follows the video:

This is the moment that you will see only on here on Univision 26, where the anti-immigrant group called ‘Border Convoy’ confronted a few supporters of the immigrant community. In this image, Univision News 26 exclusively captured how this anti-immigrant group carries firearms inside their cars during their convoy’s journey to McAllen. This, after they had said that they would not stop in El Paso because of alleged death threats. During this confrontation with a pro-immigrant group, we spoke exclusively with Peter Santilli, a spokesperson for the group.

SANTILLI: For humanitarian reasons, we came out here to support the people of Texas so to stop the human trafficking of these people. Those who come in sick into our country. We’re especially worried because a few of them are criminals. They come with babies in this arms and they belong to drug cartels. [You can watch Santilli’s exact comments here.]

A few minutes later, Santilli insinuated that Univision 26 News was conspiring with the pro-immigrant groups and even threatened to investigate our own work.

Threats that we were the first and only media outlet present at the very same moment that the mobilization of about a dozen police arrived, a little bit after 5pm in the afternoon and that led to the shutdown of I-10 East around Lomalan Street for about 90 minutes, even though, according to El Paso police, there was a call from the pro-immigrant group that denouncing the presence of firearms on behalf of the convoy, where a member allegedly threatened an immigrant activist and his wife with a rifle.

ACTIVIST: Miguel Juárez was behind us, about three cars back. And the man who was in the Monte Carlo took out a rifle and he pointed the gun at Miguel Hermona.

Despite the fact that Univision 26’s cameras exclusively captured what appeared to be a rifle, convoy members denied that they were using firearms and that their only purpose was to support the Border Patrol. On the contrary, they affirmed that the pro-immigrant group tried to take them off the the I-10’s highway lanes. 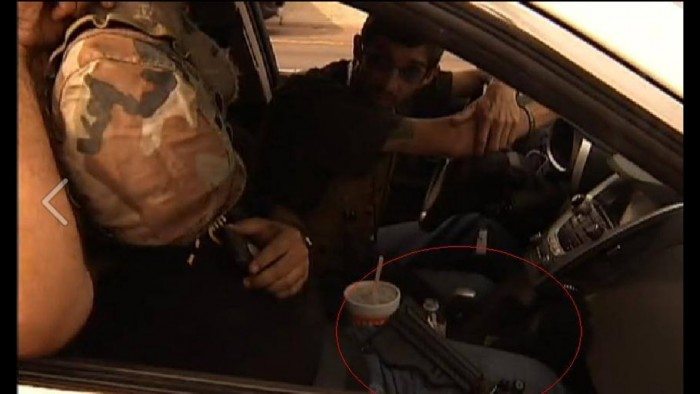 A tweet to Border Convoy has yet to be answered:

Dear @borderconvoy we were given photo of one of your members w/gun. Are these your members yesterday in #ElPaso? pic.twitter.com/bDec1nOH05

Last night Border Convoy organizer Eric Odom explained to local El Paso news that “they had a legal right to carry a weapon for protection.”

You can also catch other raw video here about what happened yesterday.

Shared by Dr. Mariana Chew Notice the weapon in the front seat, media was aware of locations because of the Hate Convoys Live Streaming and my asking people on FB to notify unprimed media. Here is the weapon on the lap of the person covering their face in the car directly behind us. We were not stopped by police and pulled over voluntarily in order to ensure the truth was heard, unfortunately the officer in this video was unwilling to hear a true account of our encounters with this convoy and how they attempted to run us off the road while hanging out of their media van as they swerved towards us in their effort to intimidate us.
Investigation pending and reports filed