Calling a Border Convoy hotel evacuation media alert “false” and “fake,” Culberson County (Texas) Sheriff Oscar Carrillo condemned the group for spreading “sensationalized” information about events that did not occur within his jurisdiction.

The media alert, published early today said Border Convoy had to be evacuated Monday morning at 4:30 AM from “a Van Horn, TX Comfort Inn” because “heavily armed ‘Operation Secure Our Border’ Citizen Militia groups” had “made it clear they spotted multiple cartel members watching the hotel from surrounding areas.”

This is a screen grab of the top of the media alert, along with a donation link to a fundly.com fundraising site. 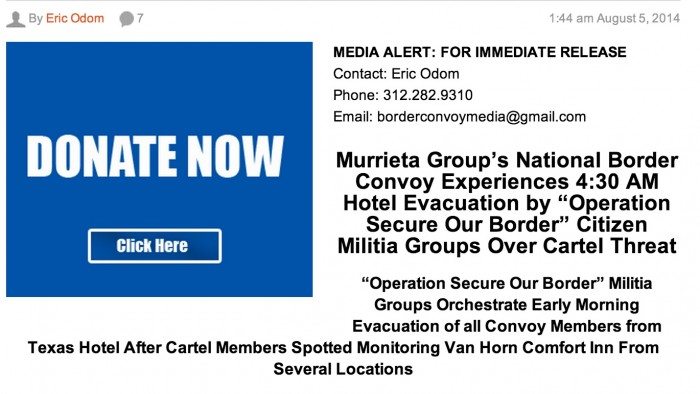 “Nothing of that nature happened here,” Sheriff Carrillo said via a phone interview this afternoon. He also explained that his office checked with all the local hotels for details and added, “such an incident did not happen in our jurisdiction.”

Sheriff Carrillo, a member of the Texas Sheriff’s Border Coalition, also noted that there is no Comfort Inn in Van Horn, which was independently confirmed by Latino Rebels and shared in tweets earlier today with Border Convoy.

Hi @borderconvoy there’s no Comfort Inn in Van Horn, TX. We spoke with several motels in that area and they keep giving us that info.

Also @borderconvoy the former Comfort Inn in Van Horn TX is now an Econo Lodge and the night manager said nothing happened.

We also spoke with the manager at the Quality Inn in Van Horn, TX, @borderconvoy and they say nothing happened the last few nights as well.

The former Comfort Inn is now an Econo Lodge and the night manager at that property said in a separate phone interview that there was no Monday evacuation, as described in the Border Convoy’s media alert. The Econo Lodge might manager said the hotel used to be a Comfort Inn, but it has been an Econo Lodge since 2006. The front desk manager at a nearby Quality Inn also said via telephone that no evacuation took place on her hotel.

When asked about the specifics of the media alert and presence of cartel members in his jurisdiction, Sheriff Carrillo said that both Border Convoy and Operation Secure Our Borders were “oversensationalizing events here on the border.”

“An event such as they one they describe would have drawn a lot of attention from us, especially since it occurred in a hotel area,” Sheriff Carrillo said. “It’s all false and fake.”

One part of the Border Convoy media alert said: “While convoy members were initially rattled and concerned by the sudden move, the gravity of the threat was later realized and Militia involvement was met with widespread appreciation. Once the convoy reached its undisclosed location, county law enforcement officials arrived, confirming the cartel threat and escorting drivers safely out of the county.”

In response to that information, Sheriff Carrillo expressed his anger towards information he felt was wrong, not factual and misleading.

“These groups are inventing these scenarios,” he said. “If they are lying about this, what else are they lying about?”

Sheriff Carrillo confirmed that a call was made to his office around 5:30 am on Monday from the Border Convoy group claiming that it was being threatened by cartel members. Sheriff Carrillo said that due to that specific call, his office did pursue the tip by checking in with local hotels and conducting standard police work. They found nothing.

Van Horn is about 120 miles east of El Paso, where the Border Convoy had been pulled over Sunday by police after allegations that someone in their group threatened an individual with a rifle. A Convoy spokesperson blamed Univision’s El Paso news station for trapping them in a chaotic incident on Interstate 10. They also said that the group was being threatened in El Paso by “two ‘human rights activists’ who were also wearing clothing suggesting relation to cartels and/or La Raza” According to local El Paso news, no arrests were made. Border Convoy said via Facebook that it pressed charges against a reckless driver, but have yet to respond to queries from Latino Rebels. An email sent by Latino Rebels to El Paso’s police spokesperson has yet to be answered.

On its official page, Border Convoy states the following:

We are a coalition of citizens who share a deep concern for the invasion currently happening unchecked at our nation’s borders. Our core group of organizers are a part of the Murrieta Border Patrol blockade who now seek to positively impact the immigration dialogue by supporting local communities taking a stand against the federal government. Unlike our federal government, we support the work our Border Patrol Agents have been doing and continue to do. Our coalition calls on Americans to join those already defending the border and help stop government-funded human trafficking. Bringing the spirit of Murrieta with us, we’ll encourage communities to rise up and take a stand against unconstitutional federal incursions. Our initial border convoy will begin in Murrieta, CA on August 1 and head towards McAllen, TX, stopping to support citizen border patrols along the way.

Latino Rebels sent an email to Border Convoy asking about the details of the current media alert and its accuracy. Organizers have yet to respond. Yesterday, Border Convoy wrote this on Facebook: 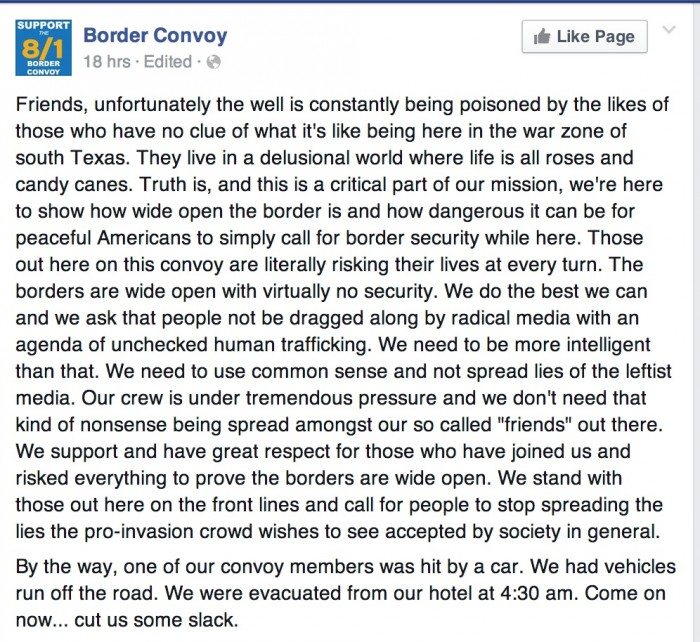 Sheriff Carrillo noted that both Border Convoy and Operation Secure Our Borders are traveling through parts of Texas on their way to McAllen. He called both groups “anti-immigrant” and said that they lack any real understanding of what happens on Texas-Mexico border when it comes to immigration and law enforcement.

“It is an insult to law enforcement officers when [these groups] share fake information,” Sheriff Carrillo said. 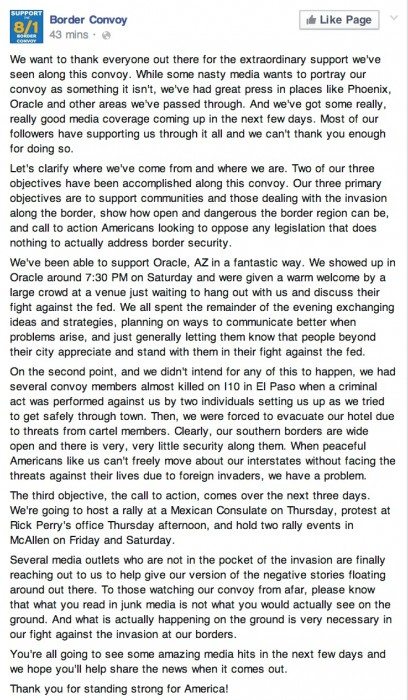 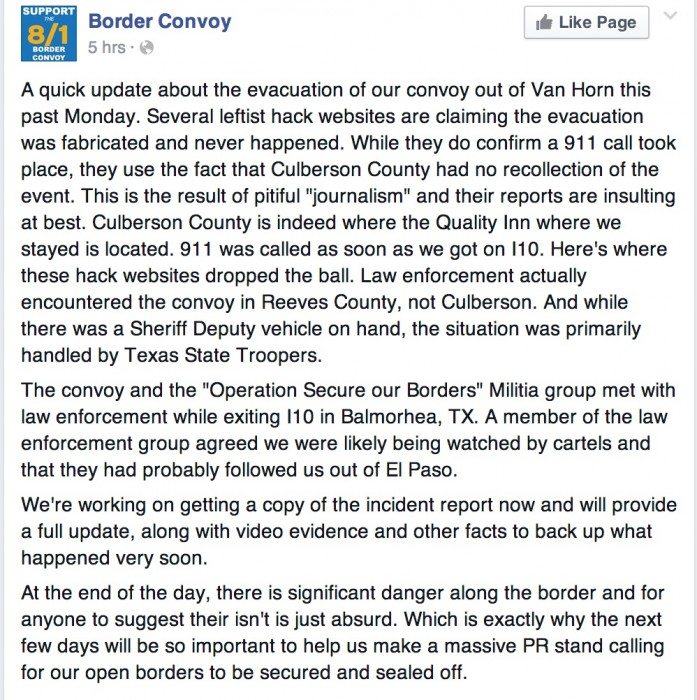