It seems that we have never really overcome. Ferguson. When I watch the images and the blaring graphics coming out of my television, the soundtrack that plays in the back of my skull like napalm is Buffalo Springfield’s “For What It’s Worth”: There’s something happening here. What it is ain’t exactly clear. There’s a man with a gun over there. Telling me I got to beware.

As Diana Vreeland wrote, I hate nostalgia. But as I look at what is unfolding in America today, it seems that she is nostalgic. Nostalgic for the days of Kent State, high speed water cannons, police dogs and tear gas. The militarization of police on the streets of anywhere America. Robo Cops pointing guns and shooting rubber bullets at their own citizens. “Hands Up, Don’t Shoot” becoming an urban mantra, much like “Tired of the Same Old Shit.”

The shooting death of unarmed Michael Brown has unleashed a barrage of images that take you right back to the Birmingham Campaign. Brown was shot at least six times from the front, two of the bullets striking the 18-year-old in the head, killing him. The circumstances surrounding the events are conflicting and contradictory. Ferguson burns at night as protestors take their anger to the streets. Dictators around the world laughing into their tea at what they see coming out of the world’s “greatest democracy.”

Words that had remained dormant but not gone are shuffled by a rather confused media: peaceful demonstrations, anarchists, the new Black Panthers, Molotov cocktails, tear gas. A media that allows its anchors to suggest on the air that the police should meet protesters with water cannons, because that would be the right response. You don’t believe me. Well, feast your eyes on what CNN’s anchor Rosemary Church said recently and watch her colleague’s reaction:

After Kent State in 1970, then President Richard Nixon ordered a commission to investigate what had happened. In its preface, it stated that the first issue that caused such events was “the unfulfilled promise of full justice and dignity for Blacks and other minorities. Blacks, like many others of different races and ethnic origins, are demanding today that the pledges of the Declaration of Independence and the Emancipation Proclamation be fulfilled now. Full social justice and dignity, an end to racism in all its human, social; and cultural forms is a central demand of today’s students black, brown, and white.” 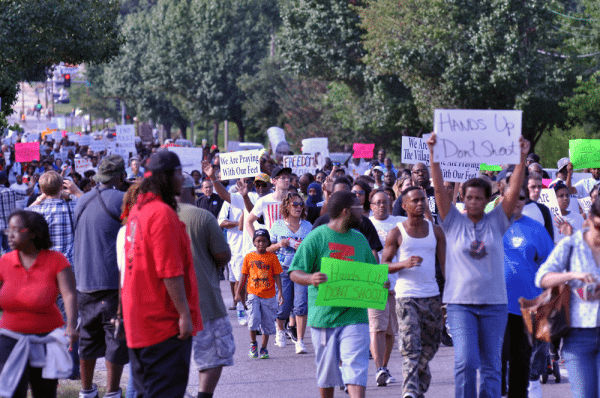 With the election of an African American president, the United States appeared to the world to have left behind its racist past and embraced a diversity whose poster child could be Mayor Bill Di Blasio and his family. The media keeps on stating that the streets of Ferguson at night show scenes that seem from another country. No. This is and always has been America. You have to deal with it.

I watch this and scratch my head, somewhat in disbelief. So, why is everybody so surprised at the militarization of Ferguson? Outraged at the National Guard armed to the teeth and aiming at you and me? I mean has no one been watching recent events before Ferguson? Events that should have let anyone living in this country know that racism is alive and riding around in a tank here? I am talking about Gov. Rick Perry, the soon to be indicted, to the tune of Macho, Macho Man, gleefully calling for the militarization of the border between Texas and Mexico to “protect peaceful protesters, citizens and property” against what?  Against children from Central America’s Northern triangle, crossing unaccompanied and fleeing for their lives. Where’s the outrage there? Why was it not wrong on the border and a travesty of justice in Ferguson? Some might say I am stretching, that I am overreaching with this argument. They are entitled to their own opinion. I respect that. But for me, the stark proof that what is happening in Ferguson has always been a reality in this country is mirrored in the twisted face of hate that greet the children at the border. Racism is racism no matter the venue.