So a story by EFE is telling the world that Google “has launched a new Web domain -.SOY- that is intended for members of the Hispanic community, touting it as the ‘place for Latinos online.'”

We thought this was an Onion piece, but it is real. Google even has actual people signing up for the domain.

It’s a domain that is focused on the incredibly large U.S. Hispanic market and caters to both individuals and brands,” Jorge Plasencia, co-founder, chairman and CEO of Republica, a Miami-based cross-cultural advertising and communications agency, told Efe Friday.

“As Hispanics, our identity is so important that when Google announced this initiative we didn’t hesitate to become partners in its launch,” he added.

Because (call us crazy) .COM or .ORG doesn’t work? It is obvious that such a move by Google is all about making more dinero, but we just scratch our head and wonder: why this, why now? Is Google about to launch a new .BLACK domain or a .JEWISH? What about a .ASIAN? And we really doubt that an English .IAM domain would make sense. So why now, Google? And why .SOY?

We checked out IAM.SOY and this is what it said:

Then we saw this (and were very surprised to see it):

There is also an entire section in Spanish. And that is the key issue here: the campaign doesn’t seem so weird in Spanish but the moment it becomes some English-language “let’s go after U.S. Hispanics” campaign, it feels disconnected, inferior and second-class.

Not to belittle the choices other make, but we still ask the very simple question: why do we want to barrio-ize ourselves now in English, right when we are at the critical moment online where we are beginning to step away from that mentality? There are COUNTLESS of AMAZING .COM and .ORG pages created by Latin@s. Maybe Google can work to help those pages out a bit more instead of pushing for a new domain campaign that could also work for those who can’t drink dairy?

And then there is this:

Maybe Google should rethink its blatant Hispandering moment and focus on, oh we don’t know, actually diversifying its workforce?

….blacks and Latinos account for 76% of landscape workers, 72% of janitors and 41% of private security guards in Santa Clara County – home to Google, Apple, Intel Corp. and scores of other tech companies.

We are sure that if Google spent money on hiring more diverse perspectives to its company, they might have actually several voices telling them that your .SOY move need a bit more thinking. But don’t take it from us, here are some recent tweets about .SOY after our founder tweeted out his thoughts:

Just read that #Google is looking to market .SOY domains for Latinos online. That’s hilarious. No thanks, @google, I am cool with .COM.

@julito77 @TlalocRivas @google They could market it instead to lacto-intolerant vegetarians.

@julito77 @google Market it to the vegan crowd instead.

And then there is the potential comedy in all this:

@julito77 @google I’m telling you. It’s a whole movement. Got my Argentine friend to buy http://t.co/7EVNq8kYnD

Which led us to see if quépendejo.soy were available:

Oh, wait, Google doesn’t let you use accents in the search. Let’s try that again: 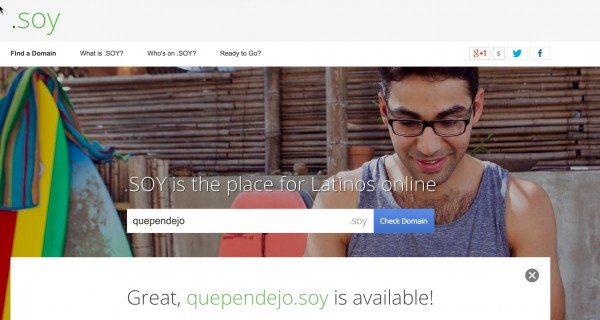 Wait, maybe this is a good thing. Start buying those domain names and have fun with them.

In the end, we don’t need some ridiculous manufactured domain name campaign to express how we feel about what it is to be an online Latin@ page. And apparently, others think so as well.

As for those who want to go all .SOY on us, good luck.

But wait, Rebeldes.somos would work well… if we were creating content in Spanish. But we aren’t (not yet) and for now, .COM it is.