Shortly after its December release, I interviewed filmmaker Seven King about his documentary The Rebirth of Paris.

King’s documentary is an homage to Paris is Burning.

I asked King a few questions centered on the state of the ballroom scene, the connection between the “older” and “newer” generation of artists, as well as general visions for the future.

King noted that the underground ball room scene was always a “cradle to different talents” and that it “used to be an underground LGBT scene to the homeless community…to express themselves.” The word “cradle” is very significant considering the familial structures of ballroom’s “Houses”–each with their Grandfathers, Parents, Mothers, Children and Grandchildren. They all represent an artistic lineage.

Many times it is common for the House family to also be the chosen family. It is not uncommon for LGBT youth to face homelessness after coming out. A 2013 HuffPo article cites that 40% of LGBT are homeless, and in NYC the average age a lesbian or gay youth becomes homeless is 14.4, and 13.5 for transgender youth (American Progress).

The ballroom House scene was a way to create a constructive space for those who did not have a supporting environment otherwise. Unfortunately, it has not been unaffected by homophobia and the classism of homelessness. 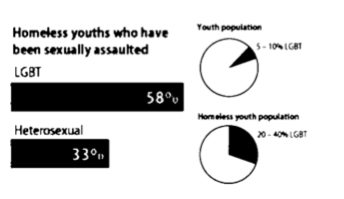 When left on the streets, homeless LGBT youth in NYC usually confront an array of dangers.

I myself was kicked out
About 7 times moved between
Best friend, best friend’s friend
Other friend who lived by work
One night while wandering
all I had was dirt
& a man asking for
No rubber & nothing
To lose at all

And “the link between HIV and homelessness among LGBT young adults is clear.” (NBC News).

King noted that his documentary was also an homage to “all those who died” and that “everybody has their struggles outside the ballroom scene or ballroom floor… finding home, finding shelter, or family.” The Rebirth is Paris is also “a story everyone could connect to.”

I couldn’t afford to get tested
Until I found a friend who was a doctor
And hooked it up with free tests
At first the mouth swab cleared
But I didn’t believe, after so many years
And asked to get blood taken again
The woman says a prayer without my asking
A silver face of angel on her necklace
And I’m not sure what to expect

I also interviewed House Grandfather Hector Xtravaganza, who recalled many deaths “along the way.” Unfortunately, and to some extent historically, these statistical deaths have included many ballroom House artists.

I’ve been here before at these crossroads
The skinned and Mars of me
Labeled with tape
Across my visibility
I’ve walked these sands before, two ways
My home is not leaving
I have always been
Going away

The Lower East Side has become more gentrified. The Village, according to Grandfather Xtravaganza, was more a more bustling and openly gay neighborhood. The LES has changed in ways that gentrification made it change.

The act of displacement is twofold. There are those who displace and those who are displaced. The House legends and icons —the voices of those displaced— were at the heart of it, creating Family.

And isn’t a chosen family
Somehow truer?
I myself kicked out
Sometimes bluer than blue

Beginning in displacement, moving to find a home, only to be displaced again is narrative akin to diaspora. An LGBT diaspora had established a homeland. It is now at risk.

King noted that the underground ballroom scene was always a “cradle” for talent and LGBT homeless youth. Indeed, the underground has always been a diasporic representation of resilience. However, what creates that scene are also the individuals who truly can only be themselves to find their home.

If you want to connect with Seven King, here is his information:

King is also working on a new web-series entitled “Eden’s Garden”, which features an all trans-male cast; and will explore ignorance, discrimination, love, support, relationships and betrayals—all through the eyes of transgender men.

Daniel Vidal Soto grew up in the North Side barrio of Fort Worth, Texas, and spent his childhood summers visiting his family in Acuña, Coahuila, México. In 2008, he won the Loft Literary Center Fellowship in Poetry. He graduated from Macalester College with a degree in English and creative writing. He is an MFA candidate at Long Island University-Brooklyn.