Tax All the Fat People: The History of Taxes in Puerto Rico

Wall Street has demoted the island’s debt to “junk bond” status. The government is teetering on bankruptcy and raising taxes in every direction. The latest proposals include a 16% “Value Added” tax and a tax on every obese child.

In fact, despite the claim that Puerto Ricans “pay no federal taxes,” Puerto Ricans are amongst the most taxed people on the planet. To the Commonwealth, they pay income taxes and a 7% sales tax.

But this is only a fraction of the taxes paid by Puerto Ricans. It all depends on how you define the word “tax.”

A slave does not pay any taxes. A slave receives free room and board, free clothes and shoes. Yet the entire life of this slave is “taxed” from morning till night.

From cradle to grave.

His entire life is a “tax.”

He pays it until the day he dies.

From this perspective, let’s examine the history of taxation in Puerto Rico.

The first taxman was the island’s first U.S. civilian governor: Charles Herbert Allen. His philosophy about Puerto Ricans and taxes was, “I’d tax a little life into them. Every Portorican has a right to demand that every acre of rich sugar land should be developed, and I’d tax it until they put up or shut up.”

What Gov. Allen neglected to mention, was that he’d use taxes to ensure that Puerto Ricans lost their land, so that US bankers could then demand that “every acre of rich sugar land should be developed.”

He accomplished this in three ways. When Hurricane San Ciriaco destroyed the island’s 1899 coffee crop, he made sure that almost no relief funds reached the devastated farmers. 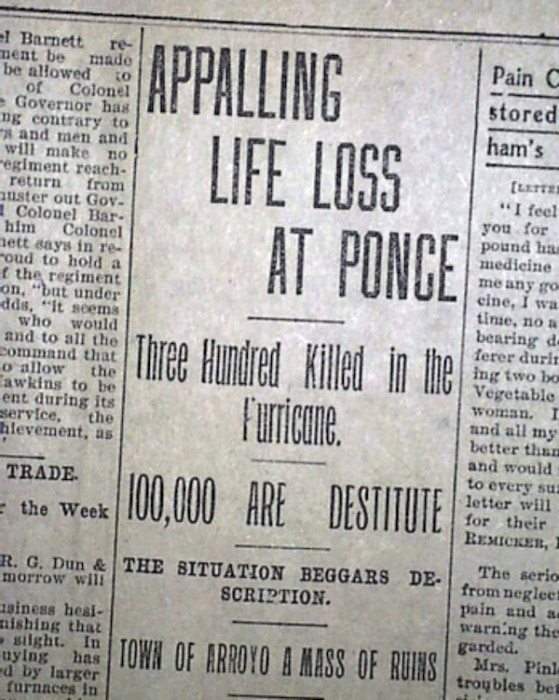 Then in 1901, Allen passed the Hollander Act, which authorized the additional taxation of those very same farmers. Finally in that same year, he supervised the island-wide conversion of Puerto Rican pesos into U.S. dollars, with each peso valued at 60 American cents: a currency devaluation of 40%.

With an island full of desperate farmers, a predatory lender appeared immediately. By 1901 the American Colonial Bank was the second largest bank on the island. By 1920 it was the largest bank, period.

Also by 1920, the majority of Puerto Rican farmers had lost their land to American Colonial, Bankers Trust and National City Bank. Charles Allen had become President of the American Sugar Refining Company: which controlled 98% of the sugar refining capacity in the US. It later became known as the Sugar Trust, and is currently named Domino Sugar.

One of the clearest images of this tax are the shacks of sugarcane workers in Ponce, with the mansion of their plantation owner squatting on top. 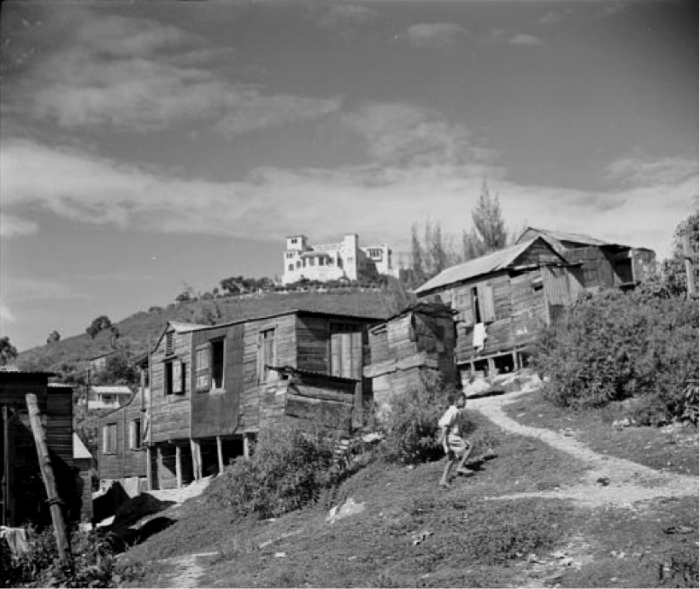 The Foraker Act of 1900 prohibited Puerto Rico from negotiating trade treaties with any foreign country. It also prohibited Puerto Rico from setting its own tariffs or import/export regulations. The insular economy was thus left defenseless against the inflow of U.S. products and capital: which, in fact, was precisely what the Foraker Act intended.

But Puerto Rico did not benefit from this arrangement. As a direct result of this U.S. monopoly over the Puerto Rican market, U.S. finished goods were priced roughly 15% higher on the island than on the mainland—and these goods were often defective.

This 15% price differential was a US tax on Puerto Rico.

Section 3 of the Jones-Shafroth Act of 1917 authorized the Puerto Rican government to collect “taxes on property and internal revenue,” “royalties on franchises, privileges and concessions” and license fees.

Since the island’s governor, treasurer and auditor were all US political appointees, and since the cabinet and agency heads were all appointed by the governor, these taxes were not really administered by the “Puerto Rican government.”

They were handed to U.S. political hacks, who showered no-bid contracts and no-show jobs on their friends and families.

The Jones-Shafroth Act created another U.S. tax on Puerto Rico.

In the sugar cane fields and in the towns, Puerto Rican workers were denied anything remotely resembling a minimum wage. Anyone who tried to organize the workers was called an anarchist and, after 1917, a communist.

When the Puerto Rican legislature tried to pass a minimum wage bill, the U.S. Congress simply vetoed it. After 1922, any constitutional challenge to this became impossible because in Balzac v. Porto Rico, (1922), the U.S. Supreme Court ruled that the U.S. Constitution did not apply to Puerto Rico. 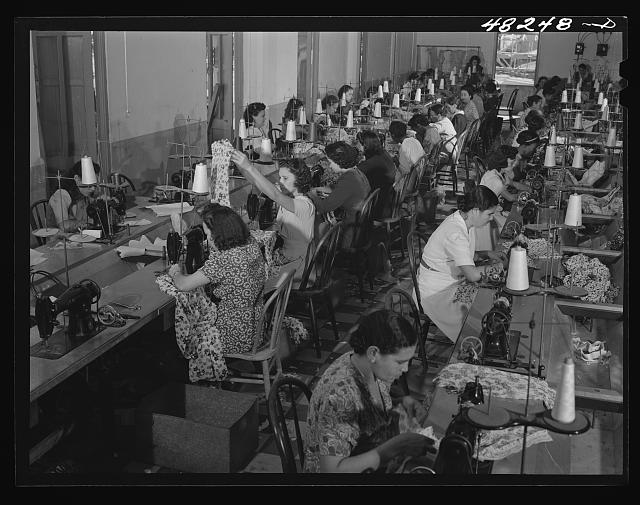 With no standing to assert constitutional privileges and immunities, Puerto Ricans received starvation wages from U.S. banking syndicates—and they had to be thankful for it, like a dog receiving a bone.

These starvation wages were a U.S. tax on Puerto Rico.

The Law of Cabotage

Section 27 of the Merchant Marine Act of 1920 (also known as the Jones Act) requires that all goods carried by water between U.S. ports must be shipped on U.S. flag ships that are constructed in the U.S., owned by U.S. citizens and operated by U.S. citizens. That means that every product that enters or leaves Puerto Rico must be carried on a U.S. ship.

This includes cars from Europe and Japan, food from South and Central America, medicine from Canada—any product from anywhere. In order to comply with the Jones Act, all this merchandise must be off-loaded from the original carrier, reloaded onto a US ship and then delivered to Puerto Rico. It all makes as much sense, as digging a hole and filling it up again. 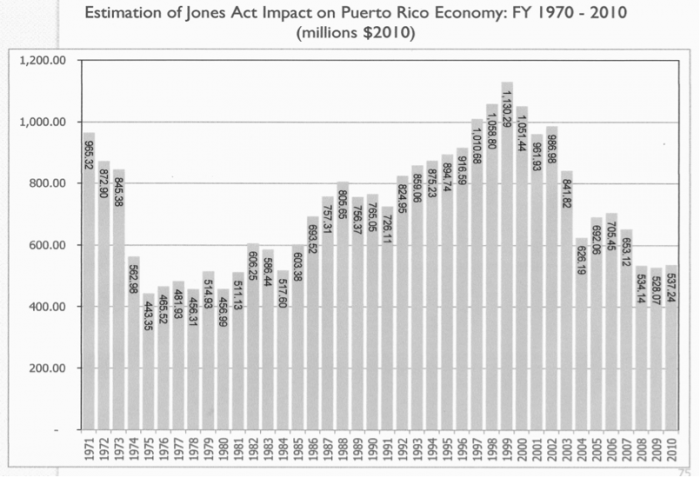 From Economic Impact of Jones Act on
Puerto Rico’s Economy

Since the $75.8 billion cost has been passed on to Puerto Rican consumers, in the form of higher prices, this is an added U.S. tax on Puerto Rico.

Ironically, this $75.8 billion tax is higher than the amount of Puerto Rico’s current public debt, and a great portion of this public debt is owed to U.S. investment bankers, private equity firms and hedge funds.

This “public debt” brings us to the present day. It is really a public scandal.

A great deal of waste, nepotism and corruption exists in the government of Puerto Rico, regardless of who is governor. Everyone knows it. This “quítate tu pa’ ponerme yo” politics —with everyone (yes, everyone) stuffing their pockets— has played perfectly into the hands of Wall Street.

Over the past five years, the Big Three rating services on Wall Street (Fitch, Moody’s, Dun & Bradstreet) all warned Puerto Rico to “get your act in order.” If this “order” was not established, the rating services would give Puerto Rico the lowest possible credit rating: Junk Bond status.

In 2013, it raised corporate tax rates to 39% and hiked the water rates by 60%.  Also in 2013, islanders paid double the average electricity costs of the rest of the US, at 29 cents per kilowatt. The government also raised the retirement age, increased worker contributions and lowered government pensions and benefits.

In 2015, the government is now considering an additional 16% value-added tax and a tax on every obese child in Puerto Rico.

Now get ready, for the three-card monte:

Despite all these fiscal austerities, despite raising taxes, reducing pensions, and laying off 33,000 workers, despite doing everything that Wall Street asked, the government of Puerto Rico had its debt demoted to “junk bond” status.

The three rating services pulled a last-minute trick on Puerto Rico, and kicked the island’s credit rating into the gutter. Because of this, the public debt of $72 billion will translate into a per capita debt of $168,471 for every person in the workforce, when you add interest payments and other debt service costs.

This “junk bond” status —a bait and switch tactic by the three rating services— is the latest hustle from Wall Street. It is the latest U.S. tax on Puerto Rico.

In the early 20th century, Puerto Ricans were thrown off their land, so that U.S. bankers could become sugar millionaires.

In the early 21st century, Puerto Ricans are being squeezed for their last dollar, so that U.S. investors can buy “distressed assets” (i.e., almost the entire island) for pennies on the dollar.

During his governorship, Luis Fortuño even invited U.S. billionaires onto the island with Act 22, a tax law that shields them from taxes on interest, dividends and capital gains. These billionaires are now buying luxury hotels, and building condominium resorts, all over the island.

Of course, no such tax relief was extended to poor, working class, or middle-class Puerto Ricans. The government has a different tax package for them: a 16% tax hike, and a fat tax on their children.

And so, after all these years, history repeats itself in Puerto Rico.

10 responses to “Tax All the Fat People: The History of Taxes in Puerto Rico”