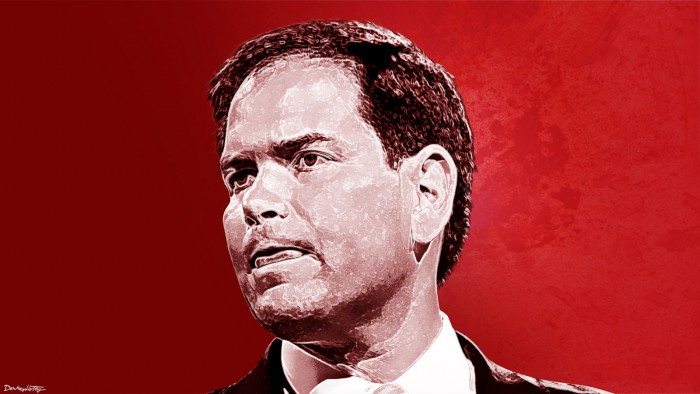 It was a hot and humid afternoon in Santurce, a metropolitan pocket of the island territory of Puerto Rico’s capital, San Juan. Around 100 people identified as supporters of the Republican Party in Puerto Rico awaited patiently for the arrival of Florida U.S. senator and GOP presidential hopeful Marco Rubio during his first official visit to the island as candidate for the presidency of the United States.

After a brief delay, Senator Rubio appeared to the music of Pitbull and began shaking hands and greeting members of the local press. Senator Rubio was drenched in sweat throughout his entire remarks to the Republican leadership and donors of the island. The sweltering Caribbean heat seemed to have made the senator of the great state of Florida break a sweat. However, was the post summer heat of Puerto Rico really the cause for his sweat, or was it the pressure of walking through the political minefield that is Puerto Rican politics?

Marco Rubio is one of 17 candidates in a crowded Republican Party primary where the extremist anti-immigrant and racist rethoric seems to be the most effective and appealing discourse to the hardcore base of Republican voters, according to numerous polls that hold the flamboyant and cocky Donald Trump ahead of the GOP pack with a double-digit lead across the board. Republican donors like the Koch brothers were watching Marco in Puerto Rico, and so were his extremist GOP primary opponents, just waiting for the moment he voiced minimal support for the “foreigners” of Puerto Rico to blast him and capitalize among the GOP voter base.

That is why it was not surprising to me that Marco Rubio announced his opposition to Puerto Rico’s ability to file Chapter 9 bankruptcy as opposed to, not only Hillary Clinton, but also his GOP opponent Jeb Bush. Both Clinton and Bush have openly supported the island territory’s access to file bankruptcy as if it were a state of the Union. So when analyzing the political spectrum and what occurred in Puerto Rico during Marco Rubio’s visit to the island, one must conclude that Senator Rubio actually had the Republican harcore extremist voter base and donors on his mind and not the people of Puerto Rico or the Puerto Rican electorate in Florida.

As expected, Senator Rubio did exactly what most Republican candidates do when visiting the island in search of money for their campaigns, and that is, tell the statehood party leadership and donor pool on the island what they want to hear by saying I support statehood for Puerto Rico, collect the cash, smile for the cameras and get the hell out of dodge.

Candidates are reaching out to a Puerto Rican constituency that is growing on the mainland http://t.co/7Hw82DU8UM pic.twitter.com/FkDeehh7zW

Hillary Clinton, on the other hand, held a more intimate gathering with healthcare and government officials where she spoke about Puerto Rico’s access to equal healthcare as if it were a state of the Union. Hillary’s ties with Puerto Rico date all the way back to 1998 when she visited the island as first lady after Hurricane Georges devastated the island. In 1998 she was obviously not a candidate for president, and her husband Bill Clinton was not up for reelection. Therefore, that historic visit is still locked in the minds of both old and young generations on the island.

Clinton’s uninterested initiative in helping the people of Puerto Rico in the past catapulted her towards handing Barack Obama his largest 2008 primary defeat after West Virginia when she won in Puerto Rico by a 36-percent margin.

It is undisputable Hillary Clinton has projected herself more as a “people person” on the national scene, especially within the Hispanic and African American communities. Personal genuity seems to be a trait national voters are becoming more and more attracted to. The days of scripted and robotic speeches are moving closer and closer to extinction within the political realm. Marco Rubio, quite frankly, consistently projects himself as robotic and scripted during his expressions which is probably why he is considerably down in all GOP polls. This is probably why Donald Trump has surged within these polls.

Although Donald Trump is controversial and racist in his remarks, a lot of people appreciate his straightforwardness in speaking his mind and standing firm with his beliefs. The average American voter is tired of fake politicians and are now looking to candidates they can identify with. The racist and harcore voter base of the Republican Party has identified and found their voice with Donald Trump — very similar to how a significant number within the hardcore left of the Democratic Party have identified with Senator Bernie Sanders. The only difference is that Donald Trump enjoys a double-digit lead in all polls and Bernie Sanders has yet to cause a significant dent in Hillary Clinton’s broad support among Democrats nationwide — that is, until recently.

I refuse to think Marco Rubio truly believes in denying equal access to bankruptcy or healthcare for Puerto Rico, and in turn I want to believe he was forced to take these positions in order to attract the hardcore base of the GOP primary which, quite frankly, frowns upon Hispanics. Senator Rubio even went as far as to say the Affordable Care Act and President Obama’s economic stimilus were the reasons Puerto Rico slipped into its exonomic hole. What he failed to mention, however, is how Puerto Rico’s Republican former Governor Luis Fortuño actually used money from the economic stimulus as opposed to most Republican governors who rejected it (initially). Fortuño also used money from the Affordable Care Act to maintain the island’s healthcare system.

With @marcorubio in Puerto Rico, a look back at how he could play among Puerto Ricans in central Florida http://t.co/j6Pqw89R1n

Rubio’s hard-nosed opposition to policies that benefit the middle class and poor in Puerto Rico is shocking, especially coming from a Hispanic. Maybe his aides advised him that he needed to bash and abandon his own people, the Hispanic community, by opposing comprehensive imigration reform and denying Puerto Rico’s access to bankruptcy in order for him to have a chance in the primary. This is exactly the type of political maneuvering that the American people are tired of.

The American people want leaders who stand firmly behind what they believe in. Hillary Clinton has openly supported the right to vote for the 3.5 million American citizens of Puerto Rico and supports equal treatment in health care for the island, as well as equal access to file bankruptcy to solve it economic insolvency.

Donald Trump’s lead continues to grow due to his ability to connect with the voter base within the Republican Party. Hillary Clinton seems to be well on her way towards the Democratic nomination. However, it remains to be seen if another people-person, speak-your-mind candidate enters the primary fray: that is, none only than Vice President Joe Biden.

The Puerto Rican voter population in Florida was able to witness very clearly which of its visiting presidential candidates to the island was speaking directly to them and which of them was talking to the Kock brothers and the extremist Republican voting base.

Break out the popcorn, people. It is going to be an interesting political primary season. My message to Marco Rubio would be the following: Don’t sweat it, Marco. You already lost the election.

Phillip Arroyo is currently a Juris Doctor student at Florida A&M College of Law in Orlando, Florida. Mr. Arroyo was selected as the only Puerto Rican to serve in the 2012 White House Internship, having worked in the office of the Vice President Joe Biden, where he analyzed domestic and economics issues while at the White House. You can follow him on Twitter @PhillipArroyo.

One response to “Don’t Sweat It, Marco”