A Year Has Taught National Latino Leaders Nothing

One year ago, I was escorted out of the prestigious Congressional Hispanic Caucus Institute (CHCI) Awards Gala for questioning President Obama on his lack of action on immigration and his mass deportation record. How much have we learned in one year? 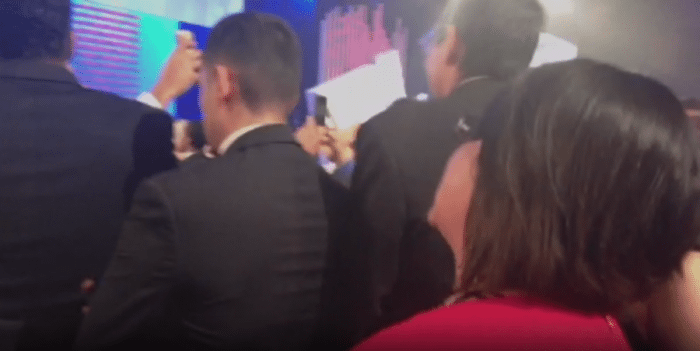 Guess who is once again the guest of honor? Yes, you guessed it, President Barack Obama. Did you hear who else was invited? Most of the Republican presidential candidates. And they all turned down the invite. The only one who seems to not have been invited is our dear friend, Donald Trump.

I question how an organization that celebrates “Latino leaders who keep the promise to their communities through their extraordinary efforts,” would not invite Trump over comments, but will invite the Deporter-in-Chief, who even Hillary Clinton recently called out for his strategy to out-deport Republicans. To be honest, this sounds a bit hypocritical, wouldn’t you say?

When I spoke up against the president in 2014, many people in attendance did not agree with me. Maybe many decided to support the President because of his announcement of Deferred Action for Childhood Arrivals (DACA) in 2012, which he was more than happy to remind everyone about at CHCI. For many honored guests that night, DACA was enough to cover up more than 2.4 million deportations during his Administration. Why have the entire bag of pan dulce when you can get the crumbs, right?

Weeks later, President Obama decided to place another band-aid on an open wound. He announced the expansion of DACA and Deferred Action for Parental Accountability (DAPA).

To date, our community has received few of the promised benefits. In fact, we have had nearly 8 years of President Obama, and have yet to see real advancement on his promise of immigration reform. What we have seen is record deportations, mass incarceration of refugees, more efforts by ICE to get mixed up with local police, due process and human rights violations, and more family separations.

The Associated Press recently reported that President Obama “deported fewer immigrants over the past 12 months than at any time since 2006.” Of course, the last year doesn’t count the 2.4 million, but it still includes additional hundreds of thousands of people who, just a year ago, were among the 11 million we wanted on the path to legalization and eventually citizenship. The AP goes on to say that the percentage of “criminals” deported during that time rose to 59 percent. So 41 percent of those deported under this Administration’s watch still have zero criminal priors.

Meanwhile, it’s been a year of rhetoric about deporting “felons not families” and accusing anyone with criminal priors of being “the worst of the worst.” You can see how the narrative continues to further criminalize our communities, advancing the notion of deserving and undeserving immigrants. All of this in the middle of a growing business of mass incarceration, where immigrants are made to pay twice for a single offense, once to society (in federal or county jail), and again in federal immigration detention, in an ICE detention facility.

As we look back on 2014, advancing executive action on immigration was a struggle, and remembering last year’s CHCI Gala, maybe it made you uncomfortable. But where are Latino leaders when we need to hold politicians to their promises? Do we forget those promises when it’s time put on a nice dress and suit and advance your own political careers?

If we remain silent when there is so much that must be said, then maybe a year has taught many people nothing.

***
Blanca Hernandez is the woman in the red dress who spoke up (and was escorted out) at the CHCI Awards Gala in 2014, as the President continued to delay taking any action to stop deportations. She lives in Washington, DC.

One response to “A Year Has Taught National Latino Leaders Nothing”