Keep Your Inner Werebigot at Bay: Don’t Dress Up as a ‘Mexican’

Not all Midwestern student newspapers are alike.

Olivia Krauth, editor-in-chief of the Cardinal at the University of Louisville, published an op-ed blasting the school’s president for appearing in a Halloween photo in which he and university staff are dressed as — well, as “Mexicans,” according to them — complete with the stereotypical sombrero, poncho and maracas. Some of the staff members don fake mustaches, while others wear a simple white head covering.

The president’s chief of staff issued an apology on Thursday, saying the president and his staff had “made a mistake and are very sorry.” She also told Louisville’s Courier-Journal that she had met with the school’s Office of Hispanic and Latino Initiatives to express “our deep regret for the hurt this experience has caused.”

But the apology was reported too late to avoid a biting rebuke from the Cardinal‘s head honcho, who hours earlier had written:

There’s a word for this. It’s called racism. …

A year ago, The Cardinal published a flow chart to help students understand if their costume choice was racist or otherwise offensive. A quick scan of my Facebook or Twitter feeds would show that U of L students understand how not to be racist with their costumes (or ever) and why that matters. I’m embarrassed that our president doesn’t have the same knowledge.

I said it once, but I guess Ramsey needs to hear it again — they’re not costumes, they’re people. 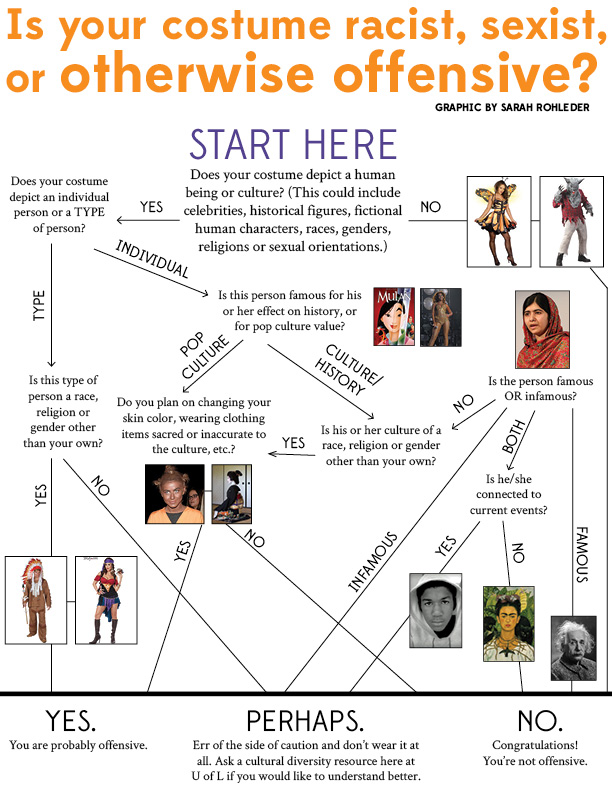 Halloween can be a scary time of year for trick-or-treaters of color, what with all the werebigots out on bar crawls or lurking near the punch bowl. You’re out and about in your Star-Lord outfit, having a good time, when all of a sudden you’re ambushed by a white club boy dressed as a Mexican drug trafficker, leaving you screaming on the edge of sanity.

Of course, most people don’t mean to be bigots. It’s merely a side effect of having been born and raised in a society as starkly divided along color lines as the United States. Once you’re bitten, it’s a constant life-long struggle to keep the beast suppressed. Halloween must be as equally unnerving for many Americans, faced with the task of picking a clever costume that doesn’t reveal the monstrosity inside.

I think the Cardinal‘s costume flowchart should be required reading every October for anyone wanting to keep their werebigot at bay, though I’d add a few caveats:

1) If you’re dressed as a person guilty of genocide or other crimes against humanity, change your costume.

2) If you’re dressed as a historical figure you know almost nothing about, change your costume.

3) If you’re dressed as a fictional character who is him or herself based on a stereotype, change your costume.

5) If you’re face is painted a different skin color to match that of a famous person, change your costume (unless that person is former Speaker John Boehner).

I’m sure there are more rules, but these are just some off the top of my head.

A good rule of thumb is to decide on an obscure fictional monster you can dress up as, which should help you avoid unleashing the real, deep-seated monster snarling inside all Americans.

But if you simply cannot fight the urge and your inner werebigot takes control, just be sure to stay indoors — and away from any cameras.

One response to “Keep Your Inner Werebigot at Bay: Don’t Dress Up as a ‘Mexican’”