The Lowdown on ‘The Get Down’ 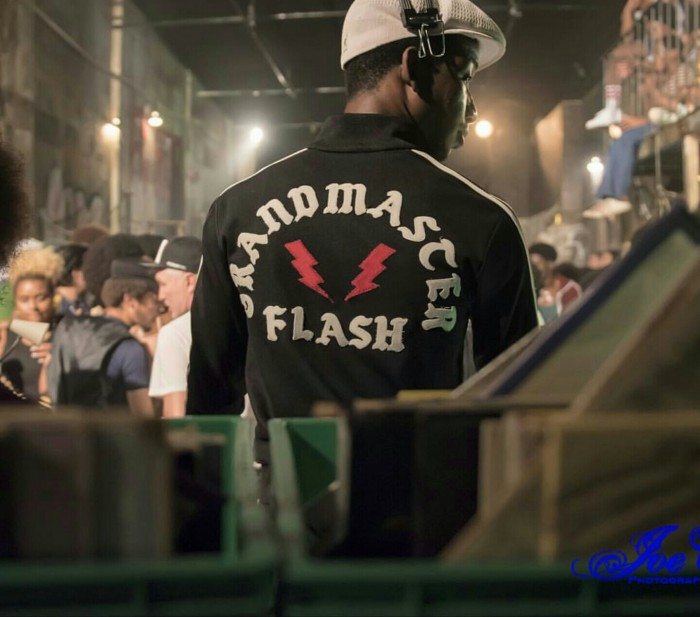 Netflix seems to be front and center when it comes to major announcements in the entertainment industry, and we are only in the middle of the first week of 2016. Earlier this week the content streaming giant released its plans for an updated series on the iconic 1980s cartoon Voltron (Lion Force Voltron, a.k.a. Voltron of the Far Universe). Any child of that decade, especially those who grew up in urban areas, were thrilled to learn of this news.

Keeping with the theme of urban living in past decades, Netflix followed up this news with the release of a much-anticipated trailer. No, it is not that of the second season of Marvel’s Daredevil (which Netflix released on Thursday). But it was that of another urban drama set far north of Matt Murdock’s Hell’s Kitchen.

Bingers got a small fix in the form of the long-awaited trailer for The Get Down produced by Baz Luhrmann (Romeo & Juliet and Moulin Rouge). From the looks of the two-minute and 58-second clip, it appears that Luhrmann’s passion project may be true to the era of the 1970s South Bronx. However, this series is not his first foray into using a particular era of New York City history as a backdrop. Who could forget his take on F. Scott Fitzgerald’s classic The Great Gatsby back in 2013. Not only did it have more than its share of historical inaccuracies, it had upscale marketing and wound up being Luhrmann’s highest grossing film to date.

The Get Down is far from a posh story.

Netflix describes the series as a tale “told through the lives and music of a ragtag crew of South Bronx teens,” “a mythic saga of how New York [City] at the brink of bankruptcy gave birth to hip-hop, punk and disco.” In essence it is what many who know of this most painful time —including this writer— a period that is not only eight blocks from Tiffany’s but one that is not draped in Brooks Brothers.

Luhrmann has been under much scrutiny since he announced this project over a year ago, so much so that he held a press conference in the Bronx where local press was in attendance along with the boroughs much maligned president Ruben Diaz, Jr. During this time, he assured those in attendance that he would be mindful of how he portrayed the most downtrodden period in Bronx history and avoid bad stereotypes.

This was of major concern for Bronxites who not only lived through that pain but stood their ground in the succeeding decades in order to repair the damage done. The concerns of the people in this case are simply because this project has an “outsider” spinning a narrative that is not of his own. Another apprehension to this period piece is whether said Hollywood A-list director either dilute the story or get it wrong altogether. In Luhrmann’s case it’s as if he was already aware that he has to tread carefully. Again, see Lurhmann’s take on Gatsby.

With all the hoopla and anxieties being dispensed, people are still asking: what does Baz Luhrmann know about the Bronx?

There are many answers to the question in question.

Although only a trailer was released, one gets the feeling that sunshine, lollipops and gumdrops are not omnipresent in this production. Luhrmann and his crew, which is backed by Sony, are displaying the hellacious nature of the time in New York City when then President Gerald Ford told it to, as The New York Daily News put it, “Drop Dead.” Yet, in the middle of onscreen chaos, there appears to be a fairly decent color palate being presented. There may not be any bushy trees with happy squirrels living in them, but there is an effervescence on display with regard to the people living in those times. There was life then and there most certainly is now. To borrow a line from the late Tupac Shakur, you can see when the roses were beginning to grow out of the concrete.

Yet this is just a trailer. And how many times have audiences been stoked by a trailer only to be disappointed? Rock of Ages, anyone?

However, it does appear that Luhrmann himself still needs to learn more about the Bronx. This is still a man who, in the same calendar year since he announced the intentions of this project, managed to commit a major faux pas when he lent his name to the vile “Macabre Suite” Halloween party, which he also attended, and which was thrown by developer Keith Rubenstein and his out-of-touch wife Inga at the old Beethoven Piano warehouse in the very heart of the neighborhood that Luhrmann uses as a backdrop in his series. This event was viewed by many New Yorkers, especially Bronx residents, as something in extremely poor taste. The event was not only curated by “artist” Lucien Smith, but it was also promoted with the horrendous social media hashtag of #TheBronxIsBurning, thus opening an old wound once coined by famed broadcaster Howard Cosell and throwing tons of salt on it.

Another thing some feel Luhrmann and company must familiarize themselves with is a little something called diversity. The cast of The Get Down is comprised of Shameik Moore (Dope), Justice Smith (Paper Towns), Herizen Guardiola, Jaden Smith (After Earth), Skylan Brooks (The Inevitable Defeat of Mister & Pete), Tremaine Browne, Jr., Yahya Abdul-Mateen II, Jimmy Smits (L.A. Law), Giancarlo Esposito (Do The Right Thing), Yolanda Ross (Whitney) and Zabryna Guevara (Gotham). As eclectic as this cast may appear to be, there has been some analysis over it.

The news site Welcome2TheBronx.com has reported that of the nine cast members who appear in the series —13 full episodes are slated for release later this year— only three roles appear to be Latino, with only two of them being played by Smits and Guardiola. The remaining Latino cast members are in supporting roles and have sporadic screen time. This has left many feeling slighted, as it is well-known throughout hip-hop culture how Latinos have played a major role in its evolution.

Puerto Ricans were by far the dominant Latino group in the South Bronx making up a majority chunk of the population in the area. In fact, Latinos in the late 70’s were a larger group than African Americans by that time so visually the trailer doesn’t appear to be too representative of the area and decade.

Luhrmann has spent the better part of a decade cultivating this series. This applies to the research, development and writing phases of the game, and also includes consulting. He sought the knowledge of hip-hop historian and journalist Nelson George. But it appears Luhrmann did not stop at that. There was someone else whose work he could reference from a visual standpoint, a person who New York Times columnist David Gonzalez referred to as “the man who took hip-hop’s baby pictures.” It appears that Luhrmann has been referencing the work of Gonzalez’s fellow Seis Del Sur member: world-renowned photographer Joe Conzo, Jr. And anyone who knows Conzo’s work can see just that. Conzo offered the following with regard to the series and his work via his Instagram account: 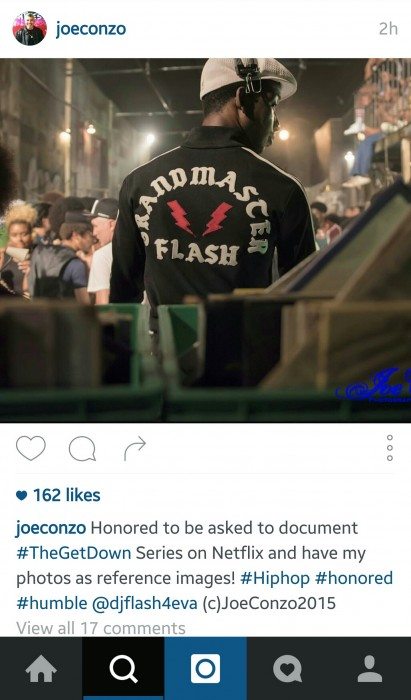 This looks to be a shrewd move on the part of Netflix and Baz Luhrmann, one that could lend some serious credibility to a show that is already under a sharp microscope with a producer/director who came under fire before the close of 2015. Conzo has pretty much seen it all in hip-hop culture. From The Cold Crush Brothers to Rakim to the Rock Steady Crew and anything in between, Conzo’s lens has captured some of the culture’s most enduring moments.

When asked if his involvement in the project solves the issue of diversity and telling narratives correctly, Conzo stated: “I got to give them credit; they did their homework. They did their research. You can see my images being recreated. The Latinos are being represented. The blacks are being represented. They used a lot of B-boys and B-girls who are dancing today. I’m happy the way it is turning out. We really represented it. We have to wait and see the finished product.”

Daniel Rivera is a host and entertainment reporter from New York City. Many know Daniel as media jack of all trades who has an all-out hustle, immeasurable knowledge of pop culture and geeky charm. Follow him @DanielRiveraTV.

2 responses to “The Lowdown on ‘The Get Down’”