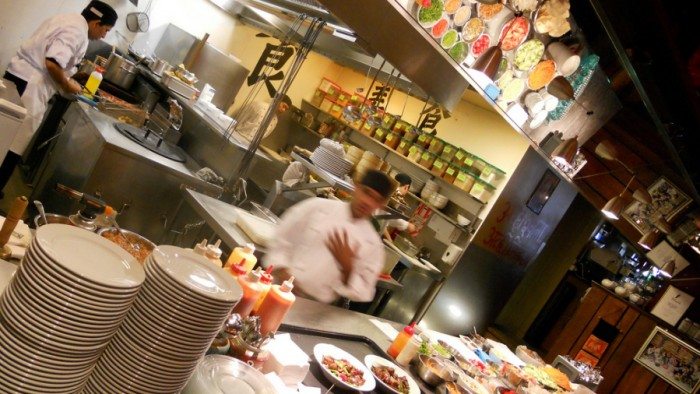 A fire in a Detroit suburb this past Sunday claimed the lives of five Mexican immigrants. All five worked at a Chinese restaurant and appear to have been living in the basement of a home owned by their boss. It doesn’t seem the workers were held their against their will, as neighbors described seeing the men coming and going at all hours. Thick basement windows, however, may have prevented the men from escaping as the room filled with smoke, possibly after a mattress caught fire from a lit cigarette. “My initial reaction is that these are the unfortunate consequences of forcing people to live in the shadows in order to make a living and the failure of federal law enforcement to enforce our immigration laws against employers,” said Carrie Pastor Cardinale, an immigration attorney who spoke with the AP.

A similar arrangement was uncovered at a Chinese buffet in a Chicago suburb only a few minutes from where I live. Illinois attorney general Lisa Madigan filed a lawsuit in November against three employment agencies and two local restaurants for violating the rights of Latino and immigrant workers. Workers were paid an abysmal $3.50 an hour, while the 15 men who worked near my home were forced to share a one-bathroom apartment with no furniture.

I know the Hibachi Grill Buffet in Elk Grove pretty well — and my wife passes it every day on her way to work — though fortunately I can say I’ve never eaten there. Still, how many restaurants subject their immigrant and Latino workers to such abuse? Probably a lot. Having waited tables during and after college, I can confirm that the stereotypical restaurant kitchen packed with Latino immigrants is truer than most people realize. If you eat at a restaurant, it’s a safe bet your food was handled by a Latino — or two, or 10, if you count the growers and pickers hunched over in the field.

Republicans condemn immigrants for taking jobs when many U.S. citizens remain out of work. Democrats, in turn, argue the work immigrants do is work no U.S. citizen would consider even applying for, such as farm or construction work, which involves long back-breaking hours under a blazing sun. (A restaurant kitchen may be less back-breaking, but it’s no less hellish.) What few politicians condemn is the business owners who knowingly hire immigrant labor with designs to get as much out of the workers for as little as possible. Bernie Sanders, who claimed a moral victory after virtually tying with Democratic darling Hillary Clinton in yesterday’s Iowa caucus, has expressed his opposition to the use of immigrant labor to fill low-paying jobs, for which he received a lot of flack from progressives and immigrant advocates.

I don’t believe Sanders is against immigrant labor, but he is against immigrant exploitation. Where he goes wrong is in his messaging: Instead criticizing the way immigrant labor hurts U.S. workers by suppressing wages in certain industries, he would do well by hammering away at not only how the exploitation of immigrant labor is wrong in and of itself, but how the plight of immigrant workers is tied to that of workers everywhere, including those in the United States. Sanders claims to be socialist, after all. Yet when it comes to immigration, he hasn’t really spoken like one.

One response to “Immigrant Rights Are Workers’ Rights”