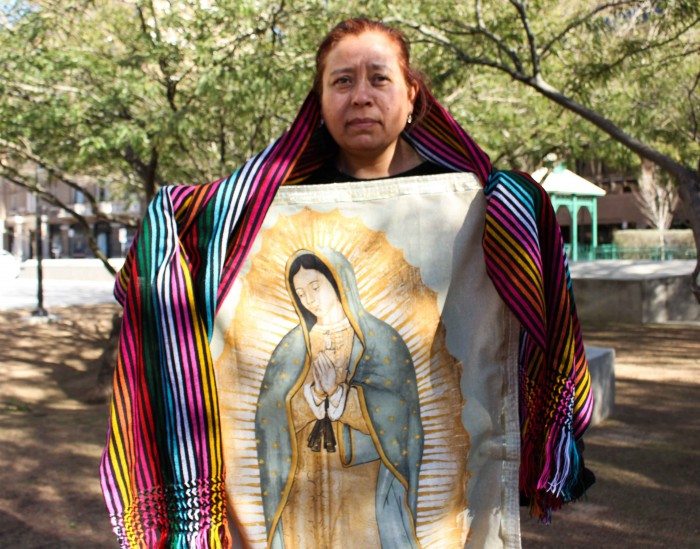 Sandra Torres, from San Antonio, holds an image of the Virgen de Guadalupe and a shawl made by women from Juárez. (Maria Esquinca)

A group of women sing “La Guadalupana,” a traditional Mexican folk song dedicated to the Virgin of Guadalupe, outside el Centro de Trabajadores Agrícolas Fronterizos, in El Paso, Texas on Tuesday, Feb. 16, the day before the pope’s visit to Juárez. A Customs and Border Patrol helicopter loudly hovers over the crowd and drowns their voices. The women, who form part of a border pilgrimage for immigrant rights, hold up a large banner to the helicopter with images of immigrants, defying its authority

The event, 100 women 100 miles, was a continuation of a previous pilgrimage last September when 100 women walked 100 miles from an immigration detention center in York, Pennsylvania to Washington, D.C. Organizers of the event were inspired by and wanted to echo Pope Francis’s message of compassion and dignity for immigrants. The pilgrimage was organized by We Belong Together, a campaign of the National Domestic Workers Alliance and the National Asian Pacific American Women’s Forum.

“We’re not only talking about policies. We’re talking about people and people’s lives,” said Claudia Taylor, community organizer with the Labor Justice Committee in El Paso. “It’s very easy to dehumanize the story and lose sight of the fact that it’s actually affecting people and their families directly. So that’s the message we want to echo. Treat everybody with compassion, with dignity, with love.”

In his visit to Juárez, Pope Francis, the son of immigrants, called immigration a humanitarian issue.

“Here in Ciudad Juárez, like in other border zones, are concentrated millions of migrants from Central America and other countries, without forgetting countless Mexicans that also look to cross. A step, into a path charged with terrible injustices: slavery, kidnaping, extortion,” he said to hundreds of thousands of people at the mass. “We can’t deny the humanitarian crisis that has resulted in the migration of millions of people in the last several years.” 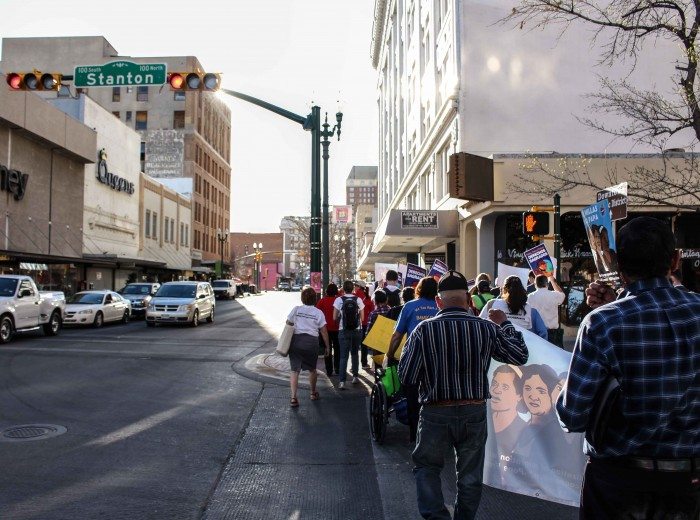 He also said forced migration is a human tragedy and a global phenomenon. Later that day, he gave a papal blessing by the Rio Grande, which divides the U.S. and Mexico. He stood atop a memorial built by Casa del Migrante, a refuge for deportees from the United States and migrants from the interior of Mexico and Central America, to commemorate the death of migrants crossing the border. He then gave his blessing to 500 guests on the other side of the bridge who were invited to receive the pope’s blessing by the Roman Catholic Diocese of El Paso.

Reverend Wendy Von Courter, a Unitarian Universalist minister from Massachusetts, said her faith demanded her to attend the border pilgrimage. “There are higher laws than the laws created here in the United States. There is the law of theology which calls us all as equal brothers and sisters and siblings,” she said. “The [immigration] laws that we have created, from my perspective, can and should be broken.”

When organizers from We Belong Together heard Pope Francis was going to visit the border, they felt it was crucial to greet Pope Francis at the border and advocate for the dignity of migrant lives. “We went into the Cathedral of the Virgen de Guadalupe and prayed for everyone who is having to flee situations of violence and poverty and risk their lives crossing the desert,” said Andrea Cristina Mercado, co-chair of We Belong Together and campaign director for National Domestic Workers Alliance. “For us it was so easy to cross because we had the right documentation, but we know for so many migrants that’s not the case.”

At a press conference in El Paso, Mercado said the situation for migrants has only worsened since the first pilgrimage in September. “Immigrant women and children and refugees continue to be locked up in immigration detention centers. Immigrants continue to live with the fear that at any moment they can be separated through deportation from their loved ones. Undocumented immigrant workers continue to be exploited,” she said.

The delegation included local faith and labor leaders and community organizations from around the country. Women who walked in the first pilgrimage also participated. Present at the event were several labor rights organizations, as well as Esther Lopez, secretary treasurer of the United Food and Commercial Workers International Union, which represents 1.3 million people in the U.S. and Canada. They primarily represent workers from the grocery and retail industry, and in the food processing and meat packing industries. 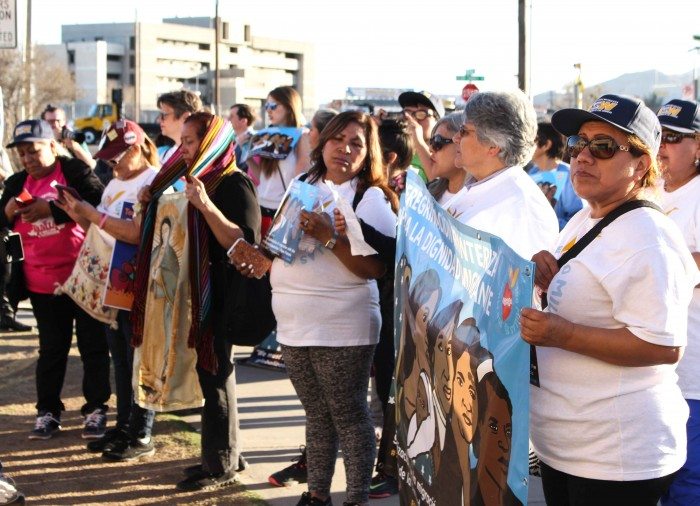 Lopez said immigration justice is a core union issue because employers will thwart protections for workers if they are undocumented. “So when workers start trying to address problems that they have at work — health and safety problems, problems against wage theft — they are immediately threatened by the employer,” Lopez said. “They are fired. They are threatened about their immigration status, and that is an absolute crime and violation of worker protections in this country.”

Claudia Taylor helps victims of wage theft in El Paso. She says labor rights and immigration go hand in hand, because immigrants are easily susceptible to exploitation. In border cities like El Paso the problem is exacerbated because the proximity to the border supplies the employers with endless cheap labor. “They’re not aware of their labor rights, and they’re under the constant threat of deportation,” she says. “It’s so easy to import more workers and exploit them, and so people have to put up with the abuse or have to risk losing their job to the next person that comes along.”

Present at the pilgrimage were also various women who have been personally affected by immigration policy. In front of the CTAF, Consuelo Martinez sings “La Guadalapana.” She lives in Houston and is a member of the Centro de Fe y Justicia, el Centro Laboral, and las Trabajadoras del Hogar. She also attended the first pilgrimage in D.C. Martinez is a permanent resident. “Now that I have my documents, I couldn’t stay quiet,” she said. “I had to be the voice of 11 million who are waiting for a path to legalization, that are waiting to be heard.” 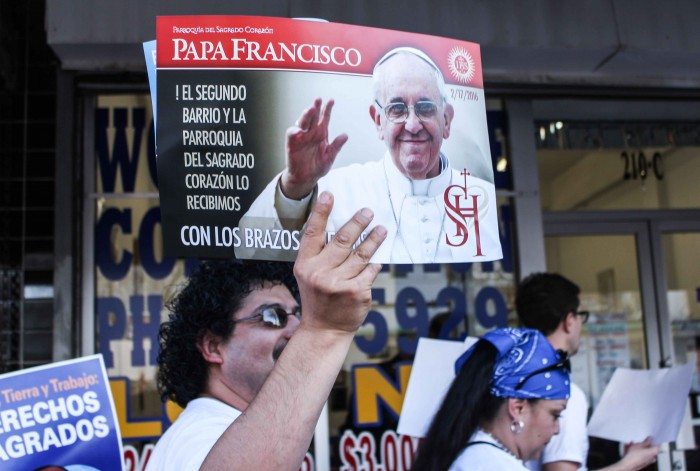 But 20 years ago she was an undocumented immigrant. The first time she immigrated to the U.S. was for employment. The second time it was to reunite with her son. She was detained in her twenties when her child was three months old. “That strength made me return, like many other women who prefer to die in the desert, and cross the border to reunite with their families,” Martinez said.

According to an immigration study done by Arizona State University titled “La Sombra del Muro: Separación Familiar Inmigración y Seguridad,” out of 1,113 recently deported individuals interviewed by researchers in Mexico, 56 percent said they planned to cross the border again and return to the U.S. “The separation of families does not exist in our border. They want to implant that on us, but we prefer to return and fight than to be without our kids,” Martinez said.

Mercado said the event has an emphasis on women because a large majority of immigrants are women and children. Organizers also wanted to bring a gender perspective on immigration policy. She said the ways in which immigration policies impact women are often get overlooked. “People don’t really think about the contributions immigrant women make to our economy and to our communities,” Mercado said. “And it’s often immigrant women who are on the front lines of change, who are organizing community meetings and marches and talking to their neighbors and volunteering.”

Maria Esquinca is a a social justice reporter. Through her writing she hopes to raise awareness about issues that affect her community while accurately capturing the complexity of la frontera. You can follow her @m_esquinca.