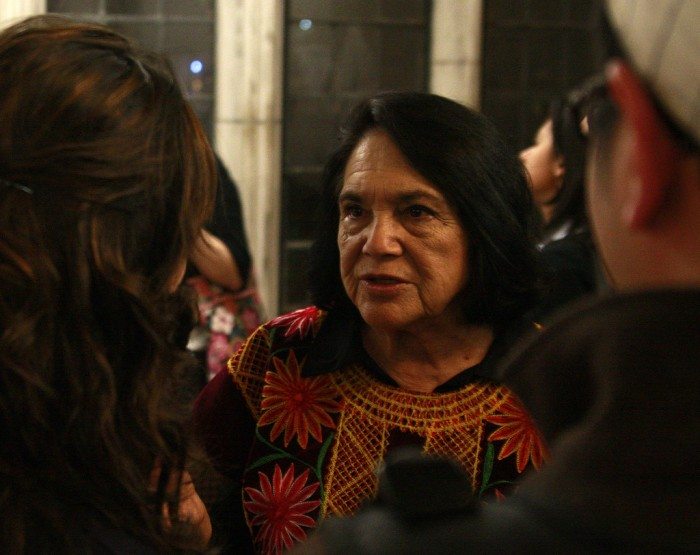 Dime con quién andas, y te diré quién eres. It’s a phrase that’s uniquely Latino, as Latino loyalty often leads many to andar with shady characters. Dolores Huerta’s friend Hillary Clinton hasn’t done anything as terrible as drunk driving or beating on her lover (however much she probably wanted to). No, Hillary’s record is much worse than that: the mass incarceration of blacks and Latinos, the deportation of refugee women and children, the removal of a democratically elected leader by means of a military coup, the weakening of the social welfare system — just a few policies the former secretary of state, senator and first lady either campaigned hard for or carried out herself. None of this has kept Huerta from giving Clinton a glowing endorsement, because, as she expressed in her appearance on Latino Rebels Radio this week, she knows her.

Huerta seems to think that, if the rest of us knew all of the kind and generous acts in Hillary’s behind-the-scenes life, we might look past the various lowlights of Clinton’s career, swapping #FeelTheBern for #ImWithHer tomorrow. A lot of Hillary’s supporters say the same. Tim Murphy recently profiled Clinton’s endorsement by five black mothers whose children were either killed by police or died in police custody. “They all described an intensive courtship by the Clinton campaign that began quietly, through back channels and outside the glare of the national media,” Murphy writes:

[Dontre Hamilton’s mother Maria] Hamilton got her first meeting with Clinton after she promised on Facebook to shut down a Clinton rally with a protest in Milwaukee last spring. When the two met, they hugged for three minutes, and Hamilton cried on Clinton’s shoulder. [Sandra Bland’s mother Geneva] Reed-Veal met Clinton at a Congressional Black Caucus dinner. ‘She walked up, held my hand, and she said, “What is it that you want?”‘ Reed-Veal recalled. She got a personal letter from Clinton afterward. Then she got a second letter, inviting her to a Democratic debate. After a Texas grand jury decided not to indict anyone for her daughter’s death, she got a third letter from Clinton.

Touring South Carolina ahead of that state’s Democratic primary on Saturday, the five mothers spoke to crowds about how Hillary had won their confidence through personal interactions. “These are all things that each of us felt — a genuineness,” Sandra Bland’s mother told a small crowd gathered at a Baptist church on Monday. “She listened and followed through for us. You can’t fake that.” Trayvon Martin’s mother described how Hillary knew the sad details of each woman’s affliction. “She knew specifically what happened in our tragedies. She knew that information and she knew because she cares. She cares. Not only does she care about victims of gun violence but she cares about women, she cares about African Americans. She cares!” I don’t know about you, but “She cares!” sounds like less of an endorsement of Hillary Clinton and more of an assurance that Hillary isn’t actually a killer cyborg from deep space.

For her part, Huerta seems to have followed this same path. “I know this woman. I’ve traveled with her,” she says. She recalls how the Clintons paid for two paraplegic Latina twins to go to college, before moving on to the story of a Methodist minister working with indigenous peoples in Central America during the Clinton presidency. Denied a meeting with Slick Willie himself, the woman handed a letter to Hillary to pass along. “By the time she got back [to Central America], [President Clinton] had settled the issue and they [?] had stopped killing the people.” Even if true, and there’s no reason to believe they aren’t, such touching anecdotes do nothing to alter the history of Hillary’s past positions. Interestingly enough, though, when asked to comment on Hillary’s role in the military coup that toppled Honduras’s already-fragile democracy, which further destabilized an already-chaotic region, Huerta deflects: “There’s a lot of different issues that we have to look at.” My point exactly.

I admit that I never thought I’d write anything even remotely critical of someone as iconic as Dolores Huerta, who was among the Latino heroes and heroines I profiled in my one-a-day biographies during Latino Heritage Month. In fact, I’ve been reluctant to criticize the endorsement of Hillary Clinton’s campaign by other prominent Latinos. “That’s between them and the ballot booth,” I wrote as recently as last week. But listening to Huerta describe her reasons for supporting Hillary, I can’t help but notice how dismissive she sounds when referring to Latinos who back Bernie Sanders. While I’ve been trying to be magnanimous by insisting Latinos have a right to back the candidates of their choosing, Huerta paints Bernie’s supporters as wild-eyed, empty-ended lunatics. “The thing is we have to be informed,” she tells Latino Rebels Radio. “We just can’t [say], Okay, this person’s giving us a good message, so we’re going to follow that message. Because one thing is the message; the other thing is making it happen. Like they say in Spanish: del dicho al hecho hay mucho trecho.”

Granted, a democratic socialist hoping to spark a political revolution in the United States may seem all dicho and no hecho. The highest office Bernie’s reached is that of U.S. senator, while Hillary has been first lady of Arkansas, first lady of the United States, a member of the U.S. Senate and secretary of State. But Hillary’s problem is precisely her long trail of hechos, ones which have hurt millions of Latin Americans abroad and millions of Latinos at home. We know what she has said and what she has done — some of it good, some of it awful.

Meanwhile, Huerta prefers to talk up Hillary’s achievements while conveniently skipping over her depredations. Asked by the actress and Sanders supporter Susan Sarandon about Hillary’s ties to Monsanto, her support for genetically modified foods and the massive contributions her campaign has received from Wall Street, Huerta appeared to either not know about any of it or not care. “Listen,” she tells a bystander, “I’ve protested against Monsanto.” Yes, we know, Doña Dolores. But your decades of fighting for farmworkers doesn’t make Hillary an honorary migrant by association. Nor does it erase the fact that the Clinton campaign hired a former Monsanto lobbyists, or that the Clintons have received millions of dollars in contributions from Monsanto and the agribusiness industry, the very people you’ve been fighting against. During her appearance on Latino Rebels Radio on Sunday, Huerta parroted the Hillary camp’s line that GOP donors are funding the Sanders campaign because they see Clinton as more serious threat in the coming general election — as though this revelation should make Sanders supporters think twice about their candidate. Such neurotic talk makes Huerta seem a lot more like my abuelita than Hillary could ever hope to.

Notwithstanding her political alliances and her reasons for them, Dolores Huerta is still a Latina icon, and deservedly so. She’s made an invaluable impact on Latinos, leaving her people in better position politically, socially and economically than how she found them. By all accounts she’s a smart, driven, well-meaning woman, and the same goes for her friend Hillary. Undoubtedly both have done what they believe to be what’s ultimately best — for Latinos, in Huerta’s case; for the United States, in Hillary’s case; and for women, in both cases. Huerta believes Clinton’s neoliberal pragmatism is better for Latinos than Sanders’s socialist vision. But Dolores Huerta is wrong: wrong about Bernie’s supporters being misinformed and unrealistic, and wrong to ask Latinos to ignore the serious stains on Hillary’s record. She’s also wrong to put her friendship with Hillary before her stewardship of Latino rights and dreams.

Hillary Clinton may be Huerta’s friend, but she isn’t mine. I’ve never received a personalized letter from Madam Secretary, and I don’t know what she’s like in private. And while I’m sure she’s pulled cats out of trees and helped old ladies cross many a street, most of what I know about Hillary Clinton centers on the positions she’s championed during the course of her lengthy career — the wonderful things she’s done to help maligned communities, as well as the things she’s done to hurt them. I know what Hillary Clinton the politician stands for and what she has done whenever she’s been given any power or influence. That’s all that should matter, really.

5 responses to “Dolores Huerta Is Wrong”