In an Attempt ‘To Go to the Edge,’ Legal Sea Foods ‘Border Wall’ Ad Fails Miserably

A new ad campaign from Boston restaurant chain Legal Sea Foods is promising to “raise eyebrows” by featuring the company’s President and CEO Roger S. Berkowitz as a presidential candidate. This morning, #feeltheberk launched, and it is the following full-page ad from The Boston Globe that just made us all do a double take. For that, we are giving Legal this morning’s #NoMames. 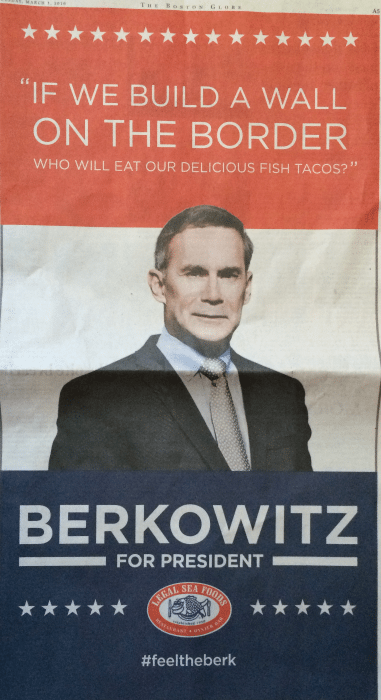 Here is why this ad sucks and is so clueless:

But hey, we get it. This ad is low-hanging fruit for Berkowitz and his company. It is so easy to be unoriginal and uncreative, while scoring cheap points off the words of a bigoted presidential candidate. Yet in the eyes of Berkowitz, this is all about making sure his ads are edgy: “They go to the edge, sometimes. [But] the purpose of advertising is to get a message across, and you don’t get it by blending.”

We do wonder how many immigrants of Mexican descent work at Legal, and before spending some serious money on a huge ad campaign, whether Berkowitz or anyone else on his executive team asked their immigrant employees if they thought they should reject the idea for the ad.

In case you are keeping score at home, the ad is already backfiring:

Who the hell thought this was a good idea? https://t.co/BlBN3NxfoO

@dnkboston @legalseafoods @julito77 they play this game all the time get all the publicity and than oops I’m sorry. #shyster

Nonetheless, and not surprisingly, one person is applauding Legal for its genius:

If I didn’t love Legal Seafoods enough already, I certainly do after the #feeltheberk ads

For the record, we are not applauding the company. This is our official response:

2 responses to “In an Attempt ‘To Go to the Edge,’ Legal Sea Foods ‘Border Wall’ Ad Fails Miserably”