OP-ED: On Immigration We Can’t Trust the Clintons

The following opinion piece was written by Isabel Garcia. The opinions expressed here are those of the author and do not necessarily reflect the views of the Latino Rebels editorial board. 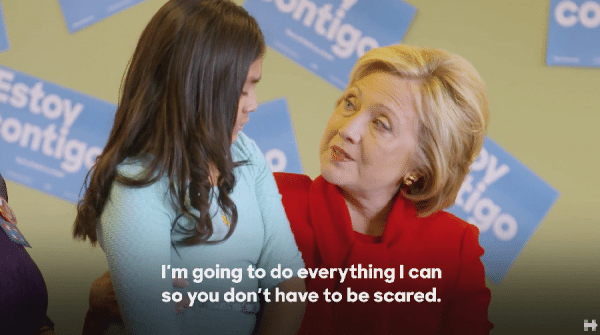 As accustomed as Latino communities have become to the political jostling between candidates for our vote, the recent attacks on the immigration record of Democratic presidential hopeful Bernie Sanders are false and divisive. More than that, those who are lobbing these misrepresentations are doing so at the behest of a political dynasty that in reality has been destructive to Latino immigrants and their families.

We in Arizona have been on the front lines of the negative impacts of President Bill Clinton’s legacy of anti-immigrant laws and policies. The irony of this outright (and insulting) misrepresentation of Senator Sanders’ record to gain votes from the Latino communities for Secretary Clinton’s benefit is almost laughable. But the thousands of senseless border deaths, the painful separation of families, massive immigrant detention and criminalization and the racially-based and inhumane local enforcement and abuse, are no laughing matter.

Those of us fighting for justice in Arizona have seen these devastating effects of these policies on our communities, along with emboldening anti-immigrant scapegoating, the destruction of unique environmental habitat along the border, as well as damage to Indigenous Peoples’ traditions, lands and ceremonial sites. 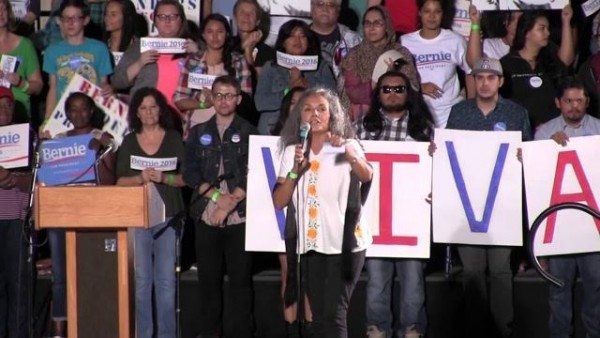 The author, Isabel Garcia, at a Bernie Sanders rally.

With the false promise that NAFTA would reduce immigration from Mexico, the Clinton administration pushed forward with economic policies that proved disastrous for the millions of Mexican agricultural workers displaced as a result. Questions remain about what the Clinton administration knew ahead of time about the true effects on immigration from NAFTA, but no questions remain in hindsight. NAFTA created the largest wave of immigrants from Mexico—having had their subsistence and small business farming decimated.

In anticipation of this massive exodus of farming communities, the Clinton administration implemented the deadliest immigration policy in American history. “Operation Gatekeeper” dramatically increased border enforcement along the Texas and California borders, driving immigrants toward the dangerous Arizona desert. Sold as a “deterrent” to border crossings, these “border security” measures not only ignored the humanitarian crises in Mexico and Central America, but created the deadly policy of sealing off the traditional border crossing points and pushing people to dangerous terrain, resulting in over 6,000 deaths, and many more thousands missing.

President Clinton’s 1996 IIRIR law set the stage for the criminalization of immigrants, the indefinite detention of immigrants, the growth of private prisons, the concept of self-deportation and the use of “secret evidence.” IIRIR also created of the notorious section 287(g) that funds the racist local law enforcement and detention made popular among immigrant bashers by Sheriff Joe Arpiao and intellectual allies like Kris Kobach. In a particularly hard blow to families trying to legalize, this Act created the “3- and 10-year bars”, requiring families to remain apart for 3 or 10 years, despite their eligibility to immigrate. No other law in recent history has limited and weakened the remedies available to avoid deportation.

Senator Sanders, on the other hand, has an unequivocal history and record supporting progressive immigration policies, and opposing harmful and exploitive proposals. His clear understanding of the power of the corporations and the 1% in this country has enabled Senator Sanders to develop the best platform for immigration reform.

As the son of an immigrant, Senator Sanders understands firsthand that we have an obligation to enact policies that unite families and communities, not tear them apart. As president, Senator Sanders will fight for meaningful immigration reform that recognizes the immense contributions made by immigrants. His plan provides a pathway to citizenship, and is grounded in civil, human and economic rights. It unapologetically puts families first, focuses on common sense reforms to build the middle class and embraces our nation’s diversity. And he pledges to make immigration a top priority of his administration, even if Congress refuses to act, by building on the executive actions taken by President Obama.

We will not be silent as a true friend and ally like Sanders is demonized unjustly for political reasons, while giving a pass to a candidate that until recently stopped referring to undocumented immigrants as “illegal.”   We will speak up and stand with Sanders because he stands up with us.

An attorney and immigrant rights advocate, Ms. Garcia received the 2006 Human Rights Award from the Human Rights Commission of Mexico, for her voice in bringing the deaths along the border to the attention of both governments, as well as the 2009 Lannan Foundation Cultural Freedom Award. She is a co-founder of the Coalicion de Derechos Humanos in Tucson, Arizona, and is a longtime member of the Board of Directors of the National Network for Immigrant and Refugee Rights, based in Oakland, California.

One response to “OP-ED: On Immigration We Can’t Trust the Clintons”