Votería: How One Latino Organization Uses Culture to Engage Voters 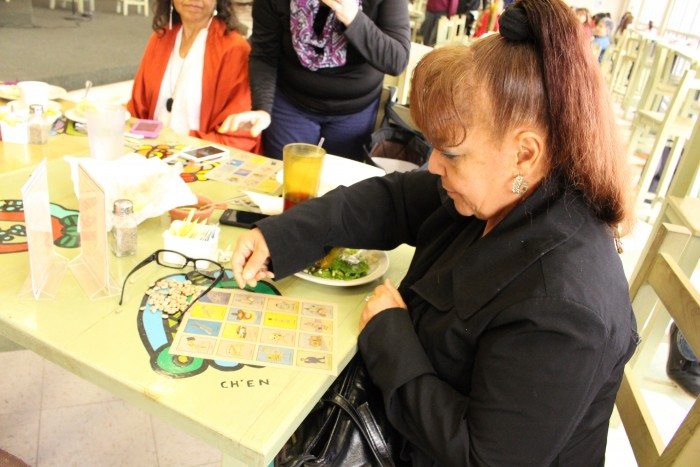 A pachuco leans back. He has one hand inside the pocket of his baggy, high-waisted pants, while his other hand casually holds open the jacket of his zoot suit. Below him are the bold, black letters: EL CHUCO. 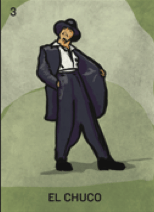 El Chuco, is one of sixteen images on a Votería card commissioned by the El Paso Equal Voice Network. The Votería card consists of 16 images. Some of the images represent the city’s culture, such as “El Chuco.” Other images, like “El Voto,” send a direct message to the community: Your vote matters.

“It’s like a Lotería card, but each image on the card of this game is a specific El Paso issue,” said Cemelli De Aztlan, El Paso Equal Voice Network weaver. “We play Votería with people, and it’s a way to get them educated and invested on why their vote matters.”

The Don Clemente Gallo Lotería, the popular version played by Mexicans, was introduced to Mexico in 1887 by French businessman, Don Clemente Jacques. It remains a popular game amongst Mexicans.

The game consists of a set of 54 cards and 10 playing boards with 20 images on each board. Each playing board has a different combination of images, so that no one person will get the same combination. If a player has the image that is called out by the announcer on their board, they will mark it with a chip. Often beans are used as chips.

Olivia Figueroa, director of A.Y.U.D.A, one of the five organizations that is part of the Equal Voice Network, said playing Lotería is a traditional Mexican pastime. “So it’s through traditions that we can inform people,” she said.

“If you play white people’s Lotería, which is bingo, well you can’t really do anything with that,” said Michael Seifert, the Rio Grande Valley Equal Voice Network weaver.

Votería is based on the popular Mexican game Lotería. The term Votería was coined in 2004 by Lalo Alcaraz, a popular cartoonist and comedian. He re-appropiated the Mexican game with his own cartoons and titles and teamed up with the Votería Participation Drawing (VPD), a non-partisan effort to encourage greater voter participation. He has revised the game every four years for VPD since then. 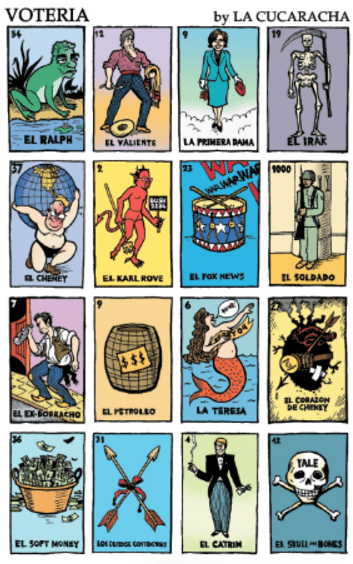 Voteria board illustrated by Lalo Alcaraz.

Inspired by Alcaraz’s “Votería,” De Aztlan approached El Paso artist Rogelio Lozano and pitched him the idea to create a Votería board. Together, they developed ideas and Lozano illustrated them.

“It’s the same issue: they wanted to engage more voters but they approached it very differently,” Lozano said. “The idea was to … use the images as pivotal talking points for certain issues.”

“The Equal Voice coalition wanted to address voting in El Paso. We focused on registering voters but we didn’t think that went far enough. So we decided that we wanted to do something engaging,” De Aztlan said. “We wanted to really educate the community on why their vote is important. We hear it all the time: ‘Tu voto es tu voz.’”

El Paso, Texas, a city that borders Ciudad Juárez, Mexico, has an 80 percent Hispanic population. The city faces low levels of unemployment and education. According to city data, 16.8 percent of the population has a bachelor’s degree, and the median income for people ages 25 to 44 is $36,842. The federal poverty guideline for people that live in a five family household is $28,410.

Voter turnout is also a huge issue in the community. The total population is 832,764, and close to half — 407,786 — are registered to vote. During the last primary election, 21 percent of registered voters turned out to vote. De Aztlan says that during local elections, voter turnout hovers around ten percent. This issue will be more pressing since Texas passed one of the strictest voter I.D. laws in the nation. Texas has been criticized for having some of the lowest voter turnout rates in the country. 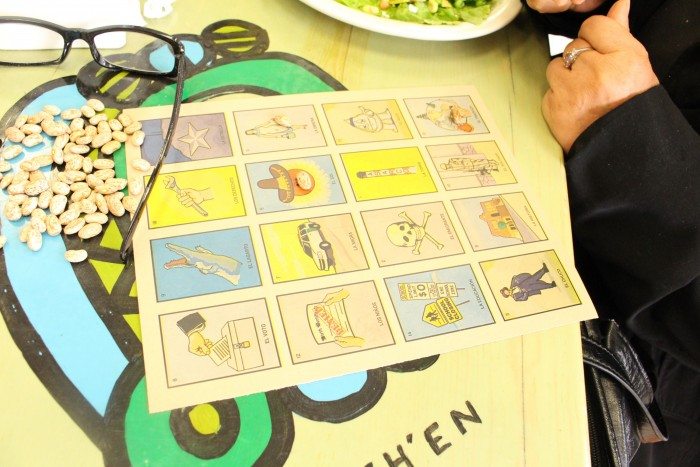 A Votería board (Photo: Maria Esquinca)

“It’s not that people don’t care; they’re not really different from anyone else. I think sometimes we just need to take one extra step and engage with the community, [and] get the conversations going,” Seifert said.

Seifert, who lives in Brownsville, a city along the Rio Grande Valley that faces some of the same issues that affect El Paso. Like El Paso, Brownsville is a majority Hispanic border city that has low rates of voter turnout. The two Rio Grande Valley metropolitan areas, McAllen and Brownsville, were ranked as the top two poorest cities in America in a U.S. Census Bureau survey.

Seifert says organizers have to find creative ways to engage communities that have been historically disenfranchised. He is in the process of adopting a Votería card for the Rio Grande Valley.

“But, at the end of that day … we see it. When people vote, things change dramatically,” he said.

THE ENTERTAINMENT VALUE OF VOTERÍA

Arianne Rodriguez, an El Paso native and resident who played Votería when it was debuted, said the game is probably the best way to educate people about issues and get them interested in voting.

“Cemelli was able to explain what each card said in a short concise sentence, so that people were able to be like ‘oh, I get it,'” Rodriguez said.

The game also allows for a play on images and words which have been manipulated by artists that have created their own versions of Lotería. For example, in one of Alcaraz’s versions of Votería he drew a typical card in Lotería called “El Diablo” (The Devil), but in Alcaraz’s version he titled it “El Karl Rove,” a reference to the former deputy chief of staff and senior advisor to President George W. Bush.

Lozano said the most difficult part of creating the Votería was taking a complex issue and constructing one image. Another issue was how to translate from Spanish to English. But the blend of bilingualism that is prevalent in the border was adopted into the game, as was done with card No.15, “El Frackaso.” 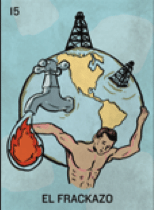 Phonetically, “El Frackaso” reads as el fracaso, which means failure. But it maintains spelling similar to “fracking.” Therefore, the card both explains and comments on the issue. Visually, the card is similar to El Don Clemente’s Lotería version of “El Mundo” (The World).

“We are a largely Hispanic community, so everybody’s played it. I didn’t want to differ too much from that style so it wouldn’t lose some of that recognition,” he said.

The El Paso Equal Voice Network will provide Votería deputy registrar training in April, so that any person or organization that wants a Votería card can play the game with the community.

“It’s a game where we can sit down around the table, feel comfortable, feel at ease, feel validated,” De Aztlan said. “So hopefully the people that are engaged in our community will walk away with a few more registered voters, but more than anything … that they are empowered and educated.”

Maria Esquinca is a a social justice reporter. Through her writing she hopes to raise awareness about issues that affect her community while accurately capturing the complexity of la frontera. You can follow her @m_esquinca.

One response to “Votería: How One Latino Organization Uses Culture to Engage Voters”