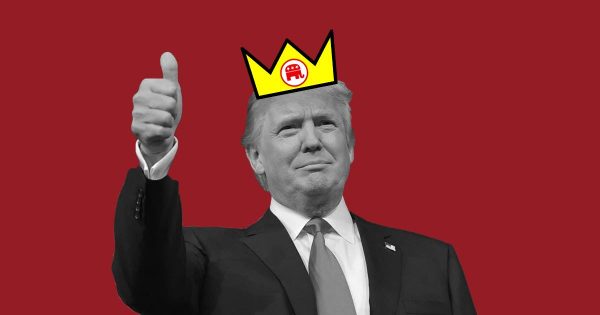 Donald Trump will be crowned as the Republican Party’s presidential nominee later this week.

As the Republican National Convention continues in Cleveland, Ohio, Donald Trump, a man who has used the national spotlight to attack Latinos, immigrants, and people of color, will be rewarded with a chance to run for the highest elected office in the United States. This is troubling for many reasons. But the worst one has to be how Republicans from all across the country are willingly supporting Donald Trump and extremist agenda.

In Florida, Senator Marco Rubio, a man who has lost every ounce of credibility and sold every piece of his integrity, plans to support a candidate who has insulted and demeaned member of his community on a regular basis. Think about that the next time you hear Rubio’s immigrant story, which is nothing more than a thinly veiled elevator speech to self-promote his political career. However, Marco Rubio is not alone. Just like him, Republicans at all levels have pivoted their stances, publicly or silently, about Trump in an attempt to put their party above American families.

Alfonso Aguilar, the President of the Latino Partnership for Conservatives Principles, labeled Donald Trump’s attacks on Mexican immigrants as “ludicrous, baseless and insulting” last year. Today, Aguilar is the lead author of a letter that encourages Latinos to support Donald Trump.

Similarly, Helen Aguirre Ferré, a veteran radio host and current chairwoman of the Miami-Dade College Board of Trustees, was once known for her sharp criticism of Donald Trump. Now, Aguirre Ferré is defending Trump by stating that Trump “is not racist,” which must be a new Republican talking point as Miami-Dade GOP Chairman Nelson Diaz arrived at the same conclusion; saying he does not believe Trump is a racist simply because “he’s not a politician.”

And let’s not forget State Representative Jeanette Nuñez, a South Florida Republican, and daughter of Cuban immigrants who sponsored a bill during 2014 Legislative session to provide in-state tuition for undocumented students across Florida. Nuñez has signaled that she will support Donald Trump at the Republican National Convention and believes that the Republican party “ultimately unify” around Trump — a man who wouldn’t think twice about undoing one of her biggest legislative accomplishments on immigration.

This is just a small sampling that demonstrates how Republicans are shamelessly lining behind their Party’s nominee, instead of standing up to Donald Trump and his extreme policies that target communities of color all across the country.

Since the launch of his presidential campaign, Donald Trump has promised to use a “deportation force” to separate millions of immigrant families, called Mexicans “rapists” and “criminals,” and said he would ban people from entering the U.S. based on their religion. These are not some bullet points made on a fringe right-wing blog; these are the core pillars of the Trump campaign — which are now cemented as part of the Republican platform.

This election is nothing more than a fight for the country we want to leave for future generations, and if we want to ensure Donald Trump does not become the next president of the United States, then Republicans willing to support Trump’s racist policies must be held accountable.

We cannot just keep quiet as Republicans receive a free pass as they attempt to normalize hate, racism, and intolerance towards hard-working families who are in pursuit of their American dream. Now is the time to unite in opposition to every divisive and toxic maneuver that the Republican party will use to elect Donald Trump as our next president.

One response to “It’s Official: Donald Trump’s Racist Agenda Is The GOP”