The Burial of Chianita La Negra: White Fragility and Blackface in Puerto Rico

In light of the controversy taking place in Puerto Rico over the eradication of blackface in Puerto Rico, I have chosen to share some ruminations. For those who don’t know, Angela Meyer is a well-known performer in Puerto Rico who dresses up in a blackface character named Chianita La Negra. She is known for performing during elections (“as a parody”) and recently, asked the public if Chianita should stage a comeback. To her surprise, her ideas were met with fierce opposition from anti-racism activists. Human rights and anti-racist organizations, such as Colectivo Ilé (with spokesperson Welmo Romero Joseph), and others have been mobilizing in order to end and bury (once and for all) this heinous practice in Puerto Rico, which celebrates lampooning and dehumanizing Black people. 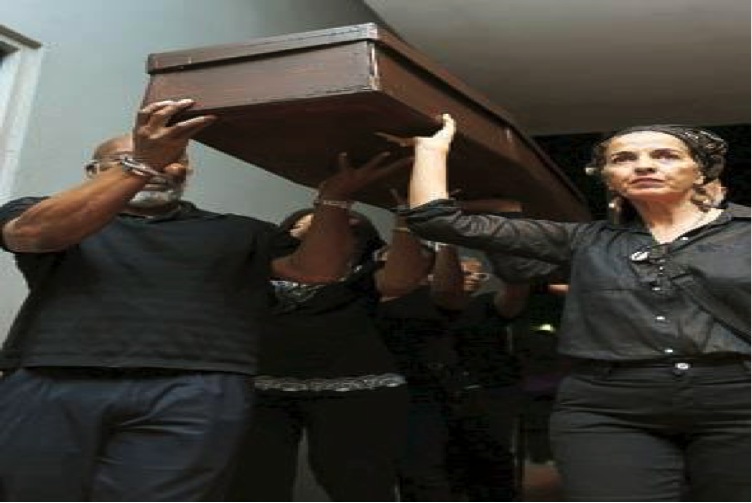 Blackface characters such as Chianita La Negra, Diplo, Pirulo el Colorao, Cuco Pasorín and Pedro Fosas Nales were among those buried this past week. Activist and scholar Maria Reinat-Pumarejo is seen carrying the coffin in front. (Via NOTICEL)

In Puerto Rico, blackface is still seen as an acceptable form of comedy, even though most countries today agree that this form of entertainment is racist and grotesque. Recently, Rafael Alejandro Andino in collaboration with other anti-racist organizations, made a video to protest Chianita La Negra by stating that: “Chianita was never Black.”

And Chianita La Negra’s problem doesn’t solely apply to overt racism. For instance, her “Voten Por Yo” expression is supposed to mean “Vote For Me” but the character mispronounces the slogan as “Voten Por Yo” instead of expressing “Voten Por Mi” to insinuate that Black people are incapable of correctly speaking Spanish.

Angela Mayer a Puerto Rican actress, comedian, and producer who dresses in blackface and her character Chianita La Negra.

It is shameful, to say the least. Yet there are many of the island who still support the character.

Defenders of blackface on the island, like Cuban-Puerto Rican writer Mayra Montero, argue that blackface represents freedom of speech while accusing the protesters of projecting ideologies imported from the United States. In a new op-ed defending Chianita, Montero argues: “En cuanto a Univisión, que canceló el segmento, sepan que mañana irán por otro personaje, y luego por otro, y dentro de un mes por otro más.” (“With respect to Univision, which cancelled the segment, you should all know that tomorrow they will go after another character, y then another, and within a month, yet another.”)

At another point of her op-ed, Montero accuses the anti-Chianita protesters of behaving like terrorists:

“With the same arguments that were brandished by the terrorists who attacked Charlie Hebdo, the protesters who took out Chianita considered that, within an act of comedy, it was offensive to paint their face Black. (Notice how their attitudes imported from the United States, they even said it in English “blackface”, look at the slant of the colonized). Then, in order to not bury only Chianita they decided to also bury Diplo, Cuco Pasorín, Pedro Fosas Nasales and other characters that “they don’t like.”

Throughout her op-ed, Montero challenges the protesters to boycott Telemundo and Raymond Arrieta (which doesn’t sound like a bad idea) and continues to express incoherencies by glorifying blackface in Puerto Rico in relation to the heinous legacy of blackface in Cuba. If it’s so glorious, then why are other countries in Latin America (especially Colombia) boycotting the practice of Blackface minstrelsy? For instance, the boycott against the blackface Micolta in Colombia has been incredibly successful in fostering new discussions on structural racism in Colombia.

In addition, those like Montero who defend the grotesque practice of blackface need to take a history course on the shameful legacy of African slavery in Puerto Rico and connect the dots by realizing that systemic racism still affects us today.

Montero, who is racially white, doesn’t even realize the white privilege and racist inclinations that allow her to openly uphold white supremacy in Puerto Rico. Moreover, what’s really lurking behind her pushback against protesters condemning blackface is what Robin DiAngelo would call “white fragility.” According to DiAngelo:

“White fragility is a state in which even a minimum amount of racial stress becomes intolerable, triggering a range of defensive moves. These moves include the outward display of emotions such as anger, fear and guilt and behaviours such as argumentation, silence and leaving the stress-inducing situation.”

Basically, what this means is that because white people in Puerto Rico are used to being openly racist, the fact that white supremacy is being condemned causes people like Montero to experience racial stress and automatically become defensive. But these people don’t know or consider what it is to be a Black Puerto Rican watching all white novelas and viewing white people smothering their face with Black paint with the sole purpose of making fun of them. Many white Puerto Ricans are experiencing racial stress but don’t take into account the fact that they still have structural advantages over Black people.

The writer and scholar Hilda Lloréns, whose scholarship has dealt with issues of racism in Puerto Rico wrote an op-ed titled “A Brief Reflection of  “White Practice of Blackface in Puerto Rico.” In her op-ed, she states that: “This important and fruitful debate concerning the practice of blackface in Puerto Rico has brought to the surface white fragility, which is another characteristic in cultures where white supremacy has been naturalized.” Indeed. Lloréns also stresses the need to rethink the false notion that racism in Puerto Rico is nothing more but a colonized way of thinking imported from the United States. Lloréns writes:

“It is important for once and for all to bury next to Chianita, the charge that racism against Black people in Puerto Rico is an imported one. As well said by Jose Luis Gonzales, ‘…the experiences of racism that Black Puerto Ricans have suffered has not been in the hands of North Americans but by Puerto Rican society.'”

In opposition to Montero, the Afro-Puerto Rican actor Modesto Lacen called for more Black actors to speak out while he was receiving the HOLA award in New York this past week. Lacen expressed the following: “I feel proud of representing Afro-Latinos. I wish to see many kids, and many young teens see us in television, not just me, but all Black actors that are making countries better from our trenches, which is the arts.” 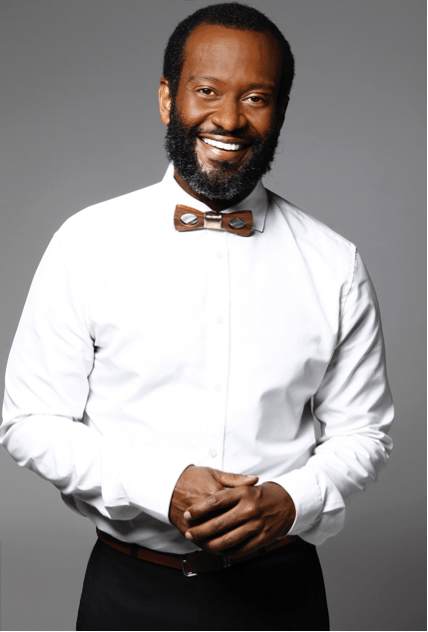 Modesto Lacen is an award-winning actor, producer and activist.

The fact that Lacen is standing up against structural racism in Puerto Rico really highlights the discussions that need to take place in order to coexist as human beings. The overwhelming episodes of anti-Black racism endured by Lacen were documented by Fernando Collazo on Radio Isla.

People like Montero will never know what it is to be a second-class citizen in your own country. Some people may claim that because Montero is Cuban she does not reflect the values of Puerto Rico but the truth is that she embodies the the same type of racist mind frame projected by many in Puerto Rico. Both Cuba and Puerto Rico have a history of African slavery and systemic racism, therefore, attempting to solely scapegoat Montero by calling her a racist white Cuban attempts to deflect the shameful practice of blackface in Puerto Rico.

Raising the issue of eradicating blackface in Puerto Rico, the anti-Chianita protests also represents a woken Black population who are fed up with the abuse. Black people are utterly demanding (human) rights and equity and this starts by humanizing them in television. A corollary to the recent protest against blackface is the ability to recognize that dehumanizing Black people will no longer be tolerated in the 21st century. Indeed, many believe that this opens a new chapter for human rights advocacy and Black empowerment in Puerto Rico.

For example, Dr. Bárbara Abadía-Rexach is calling this movement a revival that “has propitiated a movement for Blackness for those who thought was agonizing.” To this day, many Puerto Ricans are still conflating freedom of speech with hate speech that refuses to talk about white privilege and white fragility in Puerto Rico or in the diaspora—because these forms of structural oppression only pertain to the United States. (Need I remind you of La Comay?) We need all Puerto Ricans to open their eyes and stop using anti-Yankee rhetoric in order to justify racial discrimination. We need Black kids to look at people in television who look like them without having to internalize self-hate at the expense of some laughs and giggles.

Unfortunately, the harsh oppression against Black people in Puerto Rico did not end after the abolition of slavery in 1873 because institutional racism makes sure that Black people are kept on the bottom rungs of society. Let’s just call this what it is: white supremacy and white fragility disguised as nationalism. We need to save ourselves from ourselves. Nobody else can do it. The questions are: Do those who love to dance salsa and eat alcapurrias in Piñones also feel indignation when it’s time to stand for Black rights in Puerto Rico? Or are they the first ones to burst out laughing when they see the buffoonery of blackface in Puerto Rico?

William García is an Afro-Nuyorican raised between New York and Puerto Rico. He has a BA and an MA in history from the University of Puerto Rico-Rio Piedras and an MA from Teachers College at Columbia University. His research interests include Afro-Latino history, hip-hop and reggaetón in the Caribbean and Puerto Rican diaspora. You can follow him on Twitter @webdubois2014.