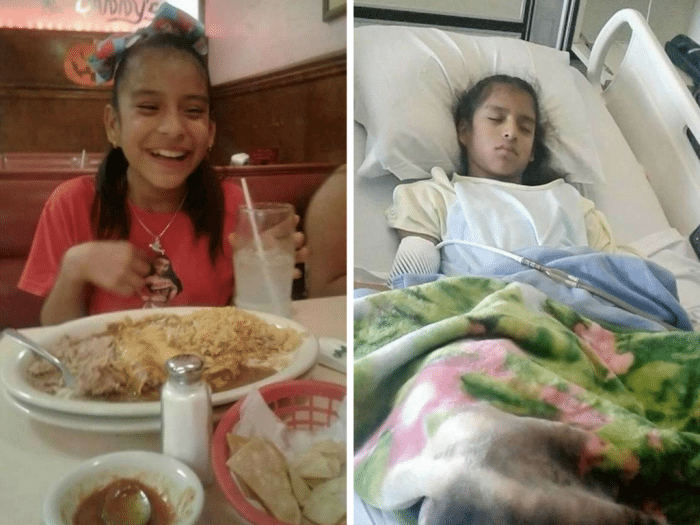 UPDATE, 4pmET via email: CBP is taking her now. Albert Martinez from Border Patrol is taking the child to Baptist Children’s Hospital in San Antonio. Refusing to provide Notice to Appear to attorney or family present. The attorney for the hospital is also present and allowing her to be taken. In addition, a press conference happened Wednesday evening in San Antonio.

On her way to Corpus, upon crossing the Border Patrol checkpoint, immigration detained the child and followed her and her family member all the way to the hospital. Rosa María had the emergency surgery to remove her gall bladder on Tuesday morning at 9am and immigration agents remain outside her hospital door and pressuring the family member to sign a voluntary departure to Mexico.

“Immigration told my family that my daughter has two choices, she either signs for voluntary deportation, or she is sent to an immigration jail for over three weeks before being deported,” said Felipa Hernandez, mother of the 10-year-old girl. “My little girl has lived her in Laredo since she was three months old. she would have died if we didn’t listen to the hospital and send her for emergency surgery. I just want my Rosa María home with me.

Advocates across the country are calling on the Trump administration to release Rosa María from Border Patrol custody. “We are outraged at the way CBP has acted. No child should face this situation alone and miles from home,” said Priscila Martinez, Texas Immigration Coalition Coordinator of the Workers Defense Action Fund. “We will organize and fight until Rosa María is back in Laredo safe with her mother.”

Community groups from around Texas are urging immigration to immediately release Rosa María. A national petition has garnered over 2,800 signatures in support of Rosa María since it was launched on Tuesday afternoon. Rallies are planned on Wednesday in Corpus Christi and Laredo at both Driscoll Children’s hospital locations.