Allowing Boys of Color to Be Emotionally Vulnerable 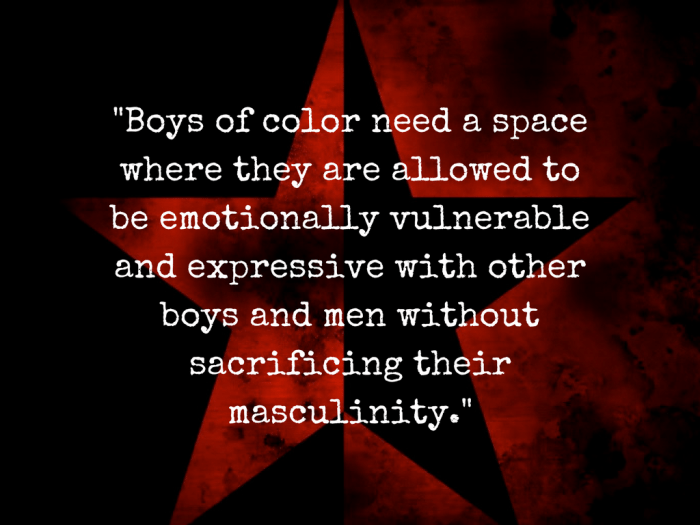 NPR’s Codeswitch recently did a piece on a public school in Washington DC for Black boys. Unique features of the school are its no-suspension policy and that most of the teachers are Black men. But an aspect of the school that was equally important is that the school is a safe space for boys to be loved and cared for by Black men. Boys of color need a space where they are allowed to be emotionally vulnerable and expressive with other boys and men without sacrificing their masculinity.

Boys of color, specifically African American and Latino boys, are typically negatively stereotyped in our society as hypermasculine. Some boys may even take on these exaggerated male attitudes as a way to deal with the negative stressors in their environment (e.g., violence, racism). But taking on some of these hypermasculine attitudes could actually backfire and have a negative impact on their psychological wellbeing.

My recent study of Black and Latino adolescent boys in a school-based male mentoring program Chicago showed that part of what they valued most about being in the program was the close, emotionally intimate bonds that they developed with other boys. They could talk about their emotions and personal problems without judgment, fear of breaking confidentiality, nor sacrificing their manhood. Staff helped to create this culture where boys can share their feelings and emotions by having older boys who served as peer mentors model this behavior.

Niobe Way wrote about this in her book, Deep Secrets. Her research with racially and ethnically diverse boys showed that the emotional intimacy between boys and their male friends dissolved as they got older. At some point during adolescence, boys learn that it wasn’t cool to have emotionally intimate friendships with their male friends. This isn’t about romantic feelings—it’s simply about their genuine feelings towards their male friends. But boys in her study still craved this emotional intimacy. Mentoring is one avenue in which boys can satisfy this need, as researchers have found that men and adolescent boys in mentoring programs value having mentoring relationships in which they can share their emotions and talk about confidential topics.

Mentoring isn’t only about sharing emotions and personal problems. It’s also about having fun. I volunteer at an after school Building Leaders program at Gads Hill Center in the Pilsen neighborhood of Chicago, and the program has many Latino adolescent boys. One way to connect with them is by engaging in fun activities and games. But at some point, this rapport building turns into a space where boys may feel comfortable talking about what’s really going on with them, and then the appropriate supports and resources could be provided.

We need more spaces where adult men and boys of color can come together, be themselves and show caring, love and support for one another. We don’t have to create single sex schools. But we can provide these spaces in our co-ed schools, communities, afterschool programs and churches.

Bernadette Sánchez, Ph.D., a Public Voices Fellow, is a Professor in the Department of Psychology at DePaul University. She conducts research on mentoring relationships and education among urban, low-income adolescents of color. She tweets from @BdetteSanchez.