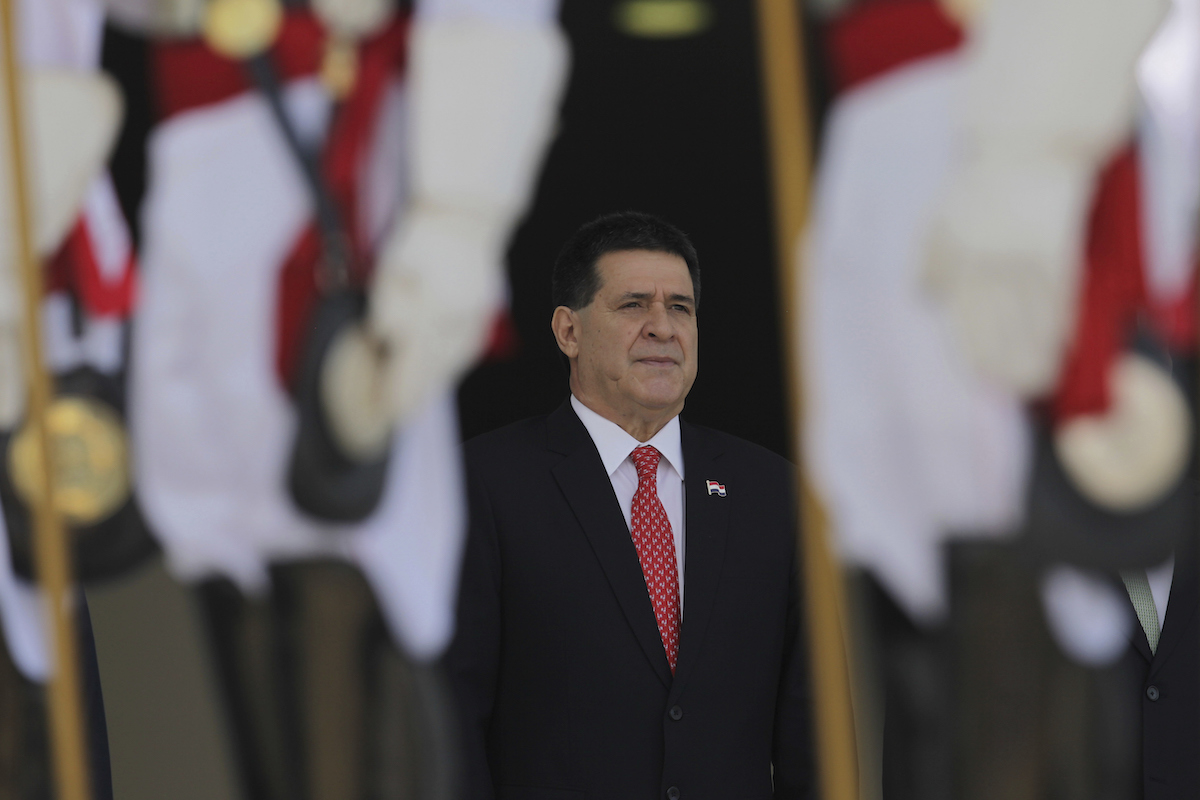 In this Aug. 21, 2017 file photo, then Paraguay’s President Horacio Cartes stands for the playing of his country’s national anthem during a welcome ceremony at the Planalto Presidential Palace, in Brasilia, Brazil. Brazilian police are seeking the arrest of Cartes as part of an investigation into kickbacks and money laundering. Federal prosecutors said Tuesday, Nov. 19, 2019, that Cartes is among 20 suspects being sought by Brazilian police. (AP Photo/Eraldo Peres, File)

RIO DE JANEIRO (AP) — Brazilian police are seeking the arrest of Paraguay’s ex-President Horacio Cartes as part of an investigation into money laundering.

On Tuesday, Brazilian authorities alleged Cartes provided $500,000 to a criminal organization at the request of Dario Messer, a Brazilian associate who was then a fugitive facing corruption charges, prosecutors told reporters.

Messer informed Cartes that he needed the funds to pay for legal fees and “it was shown that money was in fact made available,” prosecutor José Augusto Vagos said.

Brazilian authorities say they have asked Interpol to put out a red notice for the arrest of Cartes. Interpol didn’t immediately respond to a request for information.

The former president remains in Paraguay and is “at ease because he had no commercial ties to Dario Messer,” his lawyer, Carlos Palacios, told the Associated Press.

Earlier this year, Brazilian police arrested Messer, the alleged leader of a group of Brazilian illicit money changers who delivered bribes as part of the “Car Wash” kickback scheme, the biggest corruption scandal in Brazil’s history.

The sprawling Car Wash investigation since 2014 has roiled not only Brazil’s business and political elite, but also spread to neighboring countries. The probe revealed the scope of corruption and cozy relationships between the public and private sectors. 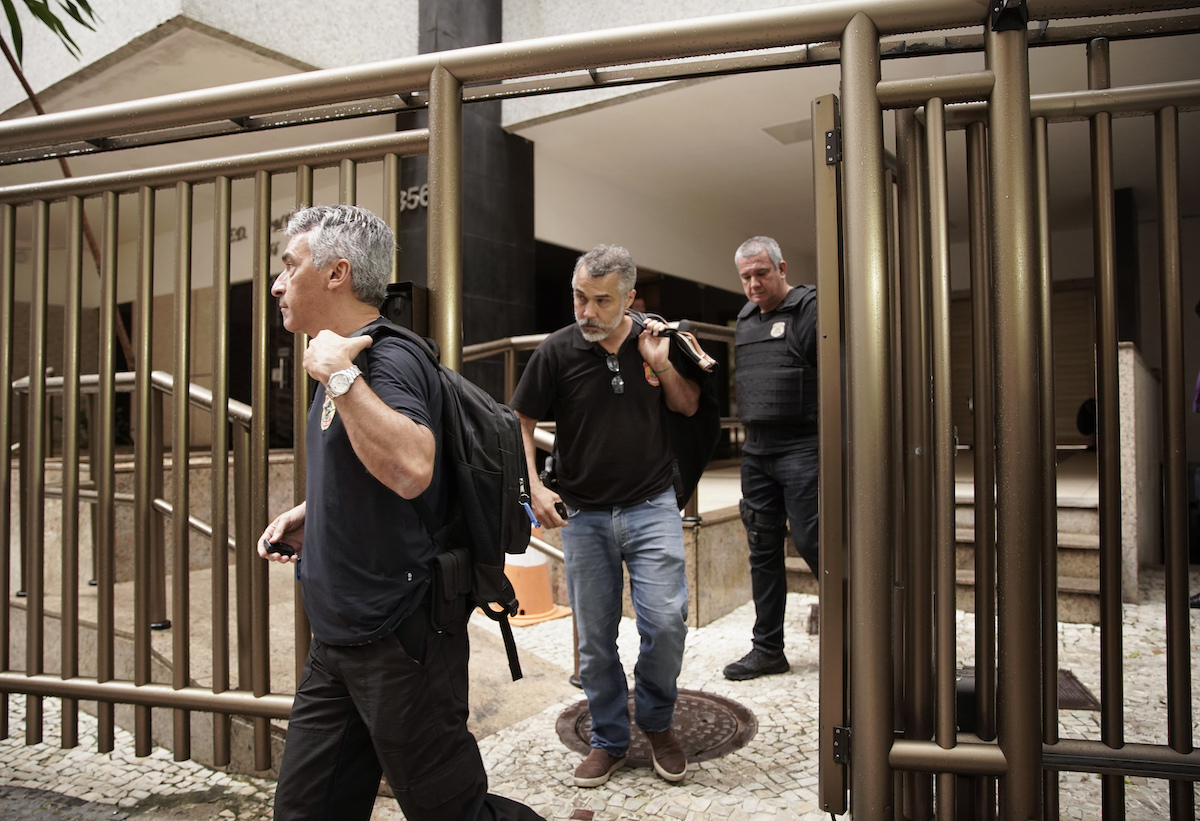 “In Paraguay, there are no untouchables. Everyone should be accountable,” Paraguay’s President Mario Abdo Benítez told reporters on Tuesday, adding that he would evaluate the Brazilian authorities’ accusations against Cartes.

Cartes, 63, amassed a fortune with two dozen companies acting in all sorts of industries, including tobacco, banking, soccer and soft drinks. He parlayed that influence into a presidential run, and served a five-year term through 2018. Cartes often denied accusations that his wealth was fed by money laundering, cigarette smuggling and drug trafficking.

Cartes has called Messer his “soul brother,” while Messer referred to him as “Boss,” prosecutors said. They are still evaluating whether Cartes’ alleged participation in the criminal organization was temporary when providing the funds to Messer, or a permanent fixture of the group.

Brazilian authorities sought Cartes’ preventative imprisonment on the basis that he could continue to finance the criminal organization, particularly members who haven’t yet been identified, said prosecutor Marisa Ferrari. 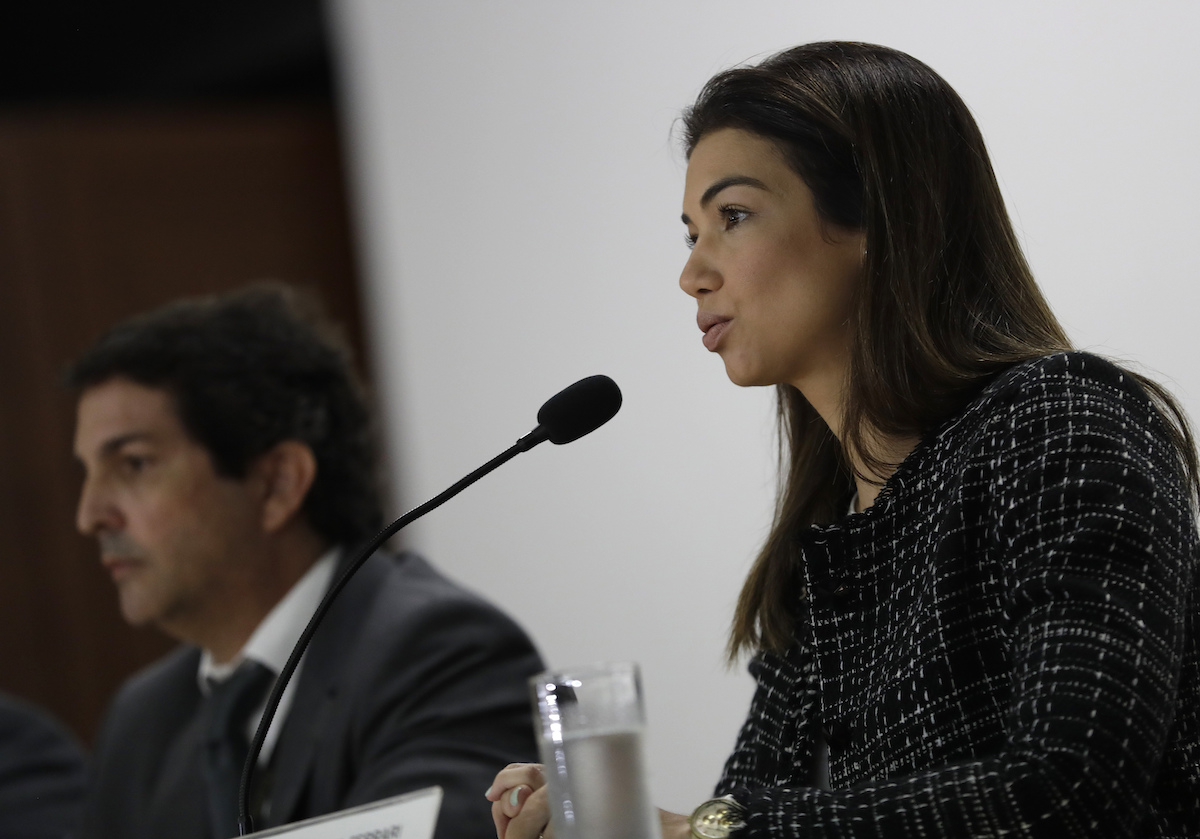 “There is a strong suspicion that the criminal conduct could be repeated,” Ferrari said. “While Horacio Cartes is no longer president, he still maintains strong economic power and no less political power in Paraguay. He has diverse companies, is one of the country’s wealthiest businessmen, and is a senator.”

Cartes was among 20 suspects sought by police. All of the suspects located in Brazil were arrested, while those abroad remain at large, authorities said.