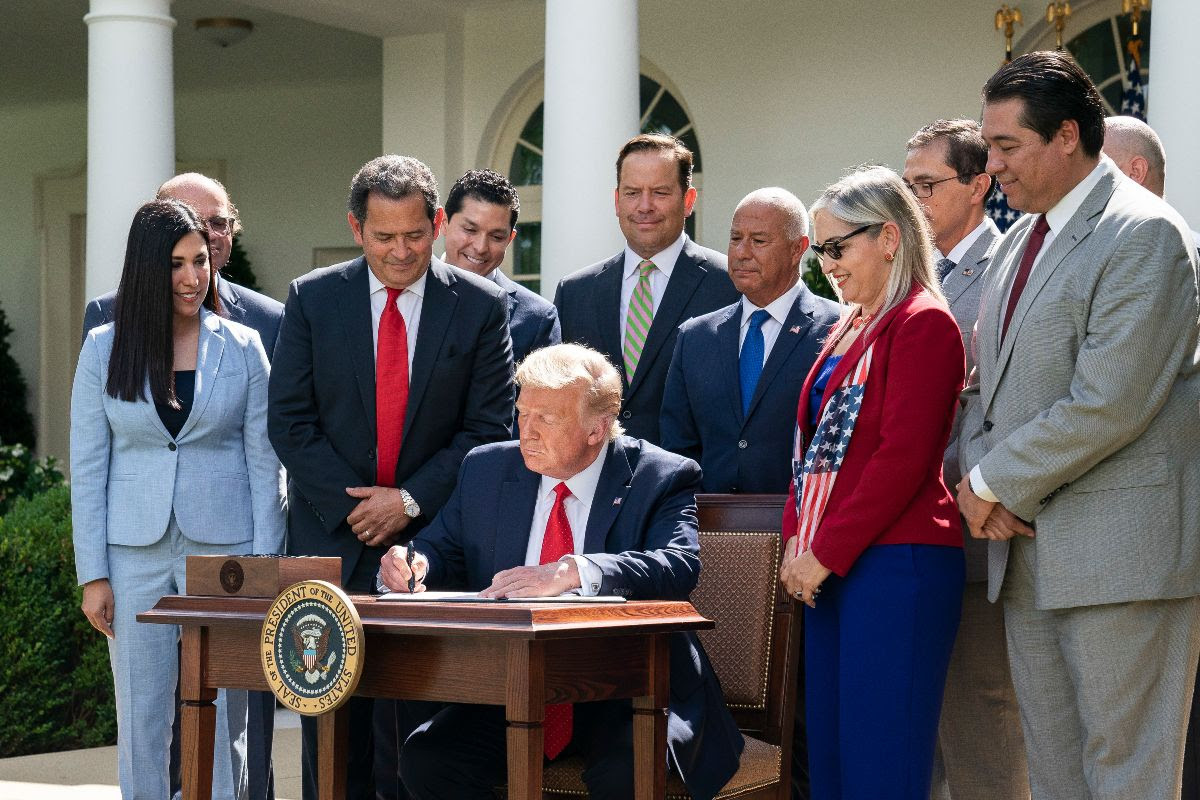 On Thursday afternoon, a group of Hispanic (yes, we use that label on purpose in this case) leaders visited the White House to fawn over President Trump’s announcement to extend the White House Hispanic Prosperity Initiative.

This photo opp came at a time when the U.S. Latino community has been one of the hardest hit populations during the COVID-19 pandemic. (Actual data proves that.)

The event probably wouldn’t have gotten that much attention with the U.S Latino community until this happened on Twitter:

The CEO of @GoyaFoods is at a White House event saying we're
"blessed to have a leader" like Trump.

To be honest, Latino Rebels wasn’t covering this event because it felt like another typical campaign event that Trump tries to use as a way to have people think that U.S. Latinos are really behind him, but when we started seeing tweets, we checked out the video, and yes, there it was:

And even before Goya Foods CEO and President Bob Unanue said what he said in the Rose Garden, he also said this inside the White House (as per an official transcript):

I’m Bob Unanue, third generation. I’m CEO and president of Goya Foods, Inc., a multibillion dollar company with facilities all over the United States and the Caribbean —

MR. UNANUE: — and Spain. We have about 4,500 employees we call “la gran familia Goya” — the great Goya family. And these people, we didn’t — we haven’t been back to work because we never stopped. We never stopped working. We doubled our efforts. And I asked the guys and gals, and I said, “Hey, this is tough.” And they said, “Look, if we don’t do it, nobody will.” And they said, “Presente.” The said, “Count on us.”

My grandfather left Spain at 18 years old from — on a steamship in 1904 with a lot of other European people who — the economy over there was not the most prosperous in — in the world. So they came to the Unit- — he came to the United States through Puerto Rico.

In 1936, he established — he was importing products in Spain. That was the Spanish Civil War. That dried up. He established Goya foods on Duane Street in Manhattan.

MR. UNANUE: At that time, it was a butter and egg market. And now you have Bouley and all these great restaurants and all the — the marvelous things of New York.

But anyway, we’re all over the United States. And the United States, after Mexico, is the largest Hispanic country in the world. By 2050, we will be one third of the population. Prosperity is what we need to — faith in God, prosperity — to work hard and to build.

You are an incredible builder. And that, I tell our — our people, our family, “Look, we’re just beginning.” Because as the country grows, as the Hispanic community grows, we continue to grow. And that is the American Dream. That’s our (inaudible). Thank you.

I am Latino, feel Embarrass of GOYA Company kissing Trump's A$$ with lies after He did nothing to Help US Citizens in Puerto Rico & Killed My Parents during Hurricane Maria, We need to #BoycottGoya & any Product that support Liar Corrupt Criminal Racist Dictator @realDonaldTrump! pic.twitter.com/nHJ5NF5Hwc

U do realize Latinos buy your products? The same people Trump has routinely shit on!

#BoycottGoyaFoods Lost all respect for you and your products. Never again. A person who calls us Latinos rapist and killers and you literally kiss his ass! pic.twitter.com/WF85AxKXv2

The owner made sure to establish his European roots to pander to Trump – the man that separates Latino children from their families. Traumatizes the children of your customers.

What a disgrace and a shame you are.#boycottgoyafoods

HISPANIC week at the WH highlights EXACTLY why it’s a white washed term used to erase the visibility of indigenous Spanish and English speakers! @goyafoods was founded by EUROPEANS While kids are held in cages Bob Goya praises the man who keeps them there #boycottgoyafoods https://t.co/Fi6jBoGh9m

And so on and so on.

Nonetheless, people shouldn’t be 100% surprised that Unanue said what he said. The family is one of the richest Spanish-American families in the United States. And like Unanue said in 2014, “We like to say we don’t market to Latinos, we market as Latinos.”

Unanue leans to the right but when it is politically convenient, he likes to stay nimble. In addition, it’s pretty clear where Goya stands on politics, especially when it decided to no longer be a major sponsor of National Puerto Rican Day Parade in 2017 when Puerto Rican nationalist Oscar López Rivera was being honored. Finally, there’s also a history of being a little awkward with the community that built up the company for what it is today. Remember the Roberto Clemente statue from 2013?

This is a very good question. It’s in every supermarket. It’s a staple in every Latino household. A majority of Latinos do not like this president or his policies. So why stake that political ground? https://t.co/TyjpOSSj9s

Latino Rebels did reach out to Goya Foods to comment via phone message, email and tweets, but as of this posting nobody at the company has responded.

For those wondering as well, #BoycottGoya and Goya are trending pretty big time on Twitter right nowhttps://t.co/etBt7lNXgq

A petition has already been generated by United We Dream, part of which reads, “If Goya wants our business, they must respect and fight for our humanity!”

Meanwhile, the posts keep coming. As well as the tweets:

The CEO of @GoyaFoods thinks we’re "blessed to have a leader" who's letting this pandemic kill us, cage our children, and constantly dehumanizes us.

Yo Goya, tell your man to stop praising a racist. Latinos made him and his family rich by buying Goya products for decades. https://t.co/KZzUAE3UfE

@GoyaFoods
Guess what! I will no longer use anything made by your company. We are "blessed to have" so many other choices on which to spend our food dollars.
I cannot support those who enable & support corruption.#BoycottGoyaFoods#BoycottGoya#TrumpTraitor#Goyaway#Goya ? https://t.co/SAaeiRs6bN

Then, AOC weighed in:

Oh look, it’s the sound of me Googling “how to make your own Adobo” https://t.co/YOScAcyAnC

Before AOC, there was this from Julián Castro:

.@GoyaFoods has been a staple of so many Latino households for generations.

Now their CEO, Bob Unanue, is praising a president who villainizes and maliciously attacks Latinos for political gain. Americans should think twice before buying their products. #Goyaway https://t.co/lZDQlK6TcU

If anything positive has come out of this, maybe it’s that there are so many alternatives to Goya, and that might be just fine:

I've been waiting for this moment my entire life. I make sazón and I'm not a Trump supporter. If you support Goya you support Trump. We have sazón, spicy sazón, and saffron sazón. We sell in bulk as well as these four ounce tins. ?????????????? https://t.co/q355Ll21YI https://t.co/XNnAYAs64k pic.twitter.com/QQM3T8Isyo

Twitter can be a cesspool, but it’s been fun today. Latinos out here sharing recipes @ brand recommendations for folks looking for new spices & beans. Love you all.
You’ll all invited to my house after quarantine for my chicken enchiladas & Spanish rice, all from scratch.