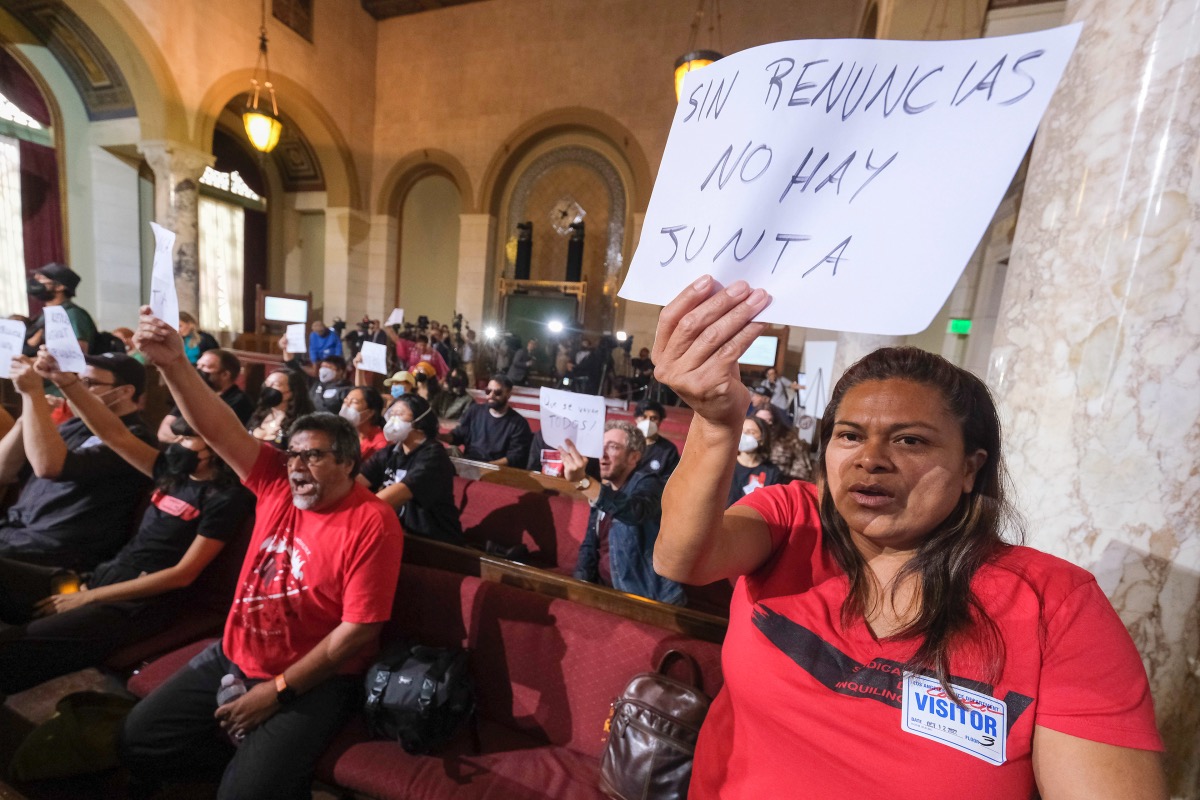 LOS ANGELES (AP) — Bricia Lopez has welcomed people of all walks to dine at her family’s popular restaurant that serves the Indigenous-influenced food of her native Mexican state of Oaxaca—among them Nury Martínez, the first Latina elected president of the Los Angeles City Council.

The restaurant, Guelaguetza, has become an institution known for introducing Oaxaca’s unique cuisine and culture to Angelenos, attracting everyone from immigrant families to Mexican stars to powerful city officials like Martínez.

But now after a scandal exploded over a recording of Martínez making racist remarks about Oaxacans like Lopez, the 37-year-old restaurateur and cookbook author said she feels a tremendous sense of betrayal.

Martínez resigned from her council seat Wednesday and offered her apologies, but the disparaging remarks still deeply hurt the city’s immigrants from Oaxaca, which has one of Mexico’s largest Indigenous populations. Sadly, many said, they are not surprised. Both growing up in their homeland and after reaching the U.S., they say they’ve become accustomed to hearing such stinging comments—not only from non-Latinos but from lighter-skinned Mexican immigrants and their descendants.

“Every time these people looked at me in my face, they were all lying to me,” Lopez said. “We should not let these people continue to lie to us and tell us we are less than, or we are ugly, or allow them to laugh at us.”

Following Martínez’s departure, two other Latino city council members also are facing widespread calls to resign since the year-old recording surfaced of them mocking colleagues while scheming to protect Latino political strength in council districts. Martínez used a disparaging term for the Black son of a white council member and called immigrants from Oaxaca “ugly.”

“I see a lot of little short dark people,” Martínez said on the recording, referring to an area of the largely Hispanic Koreatown neighborhood. “I was like, I don’t know where these people are from, I don’t know what village they came (from), how they got here.”

Lopez said she heard such racist comments growing up in California but had hoped they would be a thing of the past, that young Oaxacan immigrants would not have to hear them.

“I want people to look at themselves in the mirror every day and see the beauty,” she said.

Demeaning language is often used against Mexico’s Indigenous people. It is “the legacy of the colonial period,” Rivera-Salgado said of Spanish rule long ago.

Racism and colorism —discrimination against darker-skinned people within the same ethnic group— run centuries deep in Mexico and other neighboring Latin American countries. A few years ago, Yalitza Aparicio, the Oscar-nominated actress in Roma who is from Oaxaca, faced racist comments in her country and derogatory tirades online over her Indigenous features after she appeared on the cover of Vogue México.

Odilia Romero said the scandal doesn’t surprise her. The Oaxacan community leader is among many who had been pressing for the resignation of Martínez, the daughter of Mexican immigrants, and the two other councilmembers on the recorded conversation.

Romero said she’s also fielded calls since the scandal broke, including from someone urging her not to let the hurtful remarks distract from critical work aiding the immigrant community.

“That is a very paternalist comment,” said Romero, executive director of the group Comunidades Indigenas en Liderazgo (CIELO) and a Zapotec interpreter. “How dare you tell us Indigenous people that we are not understanding. Of course we understand—we see this every day.”

Lynn Stephen, an anthropology professor at the University of Oregon who researches Mexican migration and Indigenous peoples, said the concept of mestizaje —or being a mixed-race and non-racial unified nation— intended to erase Indigenous communities, not uplift them, and the discrimination persists to this day. It is carried to the United States with those who migrate, she said, while similar divisions also exist in other Latin American countries.

“These kinds of comments directed toward Indigenous people from non-Indigenous people from Mexico, Guatemala, etc., it’s a different kind of layer of racism,” Stephen said. “Folks from Oaxaca, they have to contend with anti-immigrant and anti-Mexican backlash and racism often from non-Latino Americans, white Americans, sometimes other folks, and then within that, often where they’re living or in school.”

Ofelia Platon, a tenant organizer, went to the Los Angeles city council chambers recently to demand the officials step down. She said she hasn’t experienced discrimination from within the Latino community as much as from outside it, but there’s no place for such abuse—especially coming from elected leaders the poor count on to help improve their lives.

“They think they have the power to step on people,” she said. “They’re two-faced.”

It’s not just the hurtful remarks that sting Xóchitl M. Flores-Marcial, a Zapotec scholar and professor of Chicana/o studies at California State University, Northridge. She called it very telling of the officials who make decisions affecting her community. She said she grew up in the United States hearing hurtful words and still faces similar rejection whenever she travels to Oaxaca and people there are surprised she’s the research team leader.

“It’s so painful because those are consequential people,” she said. “This is hurting us—not just our emotions, but our actual life in terms of our jobs and our opportunities.”

Still, she said she has hope for future generations in “Oaxacalifornia,” the tight-knit community that has maintained traditions while embracing life in Los Angeles.