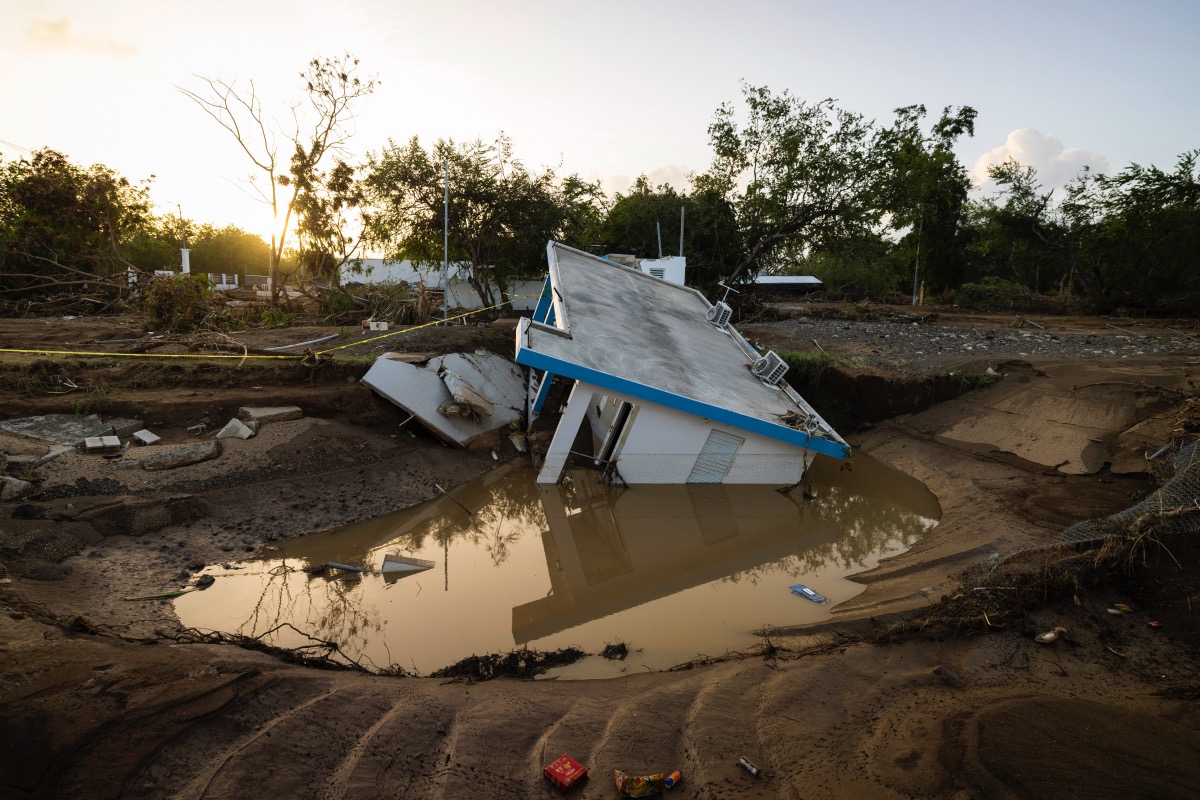 View of a house that was washed away by Hurricane Fiona at Villa Esperanza in Salinas, Puerto Rico, Wednesday, September 21, 2022. (AP Photo/Alejandro Granadillo)

PUERTO RICO: For the first time, the U.S. Environmental Protection Agency (EPA), will test air and groundwater in underserved and polluted communities in Puerto Rico’s southern region. The announcement, made on Friday, is part of the Biden administration’s effort to directly address the disproportionate impacts of pollution that have existed for decades in many low-income communities and communities of color.

Challenges to access clean water and fragile infrastructure also burden the region, which was made worse by the most recent hurricane that hit the island in September.

The announcement forms part of EPA Administrator Michael S. Regan’s Journey to Justice tour that addressed several communities troubled by long-term pollution. The EPA is also set to invest $100,000 in two pilot projects in the coastal city of Guayama.

ARGENTINA: The Argentine government added on Friday an additional exchange rate for tourists. International visitors will be able to use foreign credit and debit cards and obtain more pesos per U.S. dollar than the official exchange rate allows.

The Central Bank of Argentina released a document detailing the policy, stating that  this rate applied to payments made by “non-residents through debit, credit, or purchases and prepaid cards issued abroad.” The new rate is approximately one dollar to 293 Argentine pesos, giving tourists an advantage over the official rate of one dollar to 157 pesos.

The decision comes at a time when inflation is currently at 83 percent and is forecasted to exceed over 130 percent in 2023.

BRAZIL: Right-wing President Jair Bolsonaro ended his silence nearly two days after the left-wing president-elect, Luiz Inacio Lula da Silva, won the October 30 run-off with 50.9 percent of the votes. In a brief public statement, Bolsonaro insinuated electoral fraud, yet urged his supporters to act peacefully and acknowledged that there would be a transition of power.

COLOMBIA: The country’s senate approved on Thursday a tax reform bill that will raise an additional 20 trillion pesos ($4 billion) annually over the next four years. Through increased taxes of up to 10 percent on coal and up to 15 percent on crude oil —depending on commodity prices— the new tax law will help finance social projects and place the country’s finances back on track.

The tax law will also impose higher taxes on people who earn more than 10 million pesos (about $2,000 per month), sugary drinks, single-use plastics, and ultra-processed foods, plus a five percent tax on streaming services such as Netflix.

Colombia’s top business lobbies complain that the reform will discourage investment. Earlier that day, the peso dropped to a historic low. However, it’s uncertain if the bill’s approval is to blame.

VENEZUELA: President Nicolás Maduro’s government and the Venezuelan opposition are exploring plans to soon resume dialogues in Mexico, according to four sources. The prime focus of the dialogues is to negotiate a course of action for a presidential election.

Last year, Maduro abandoned dialogues disagreeing over the extradition of a close ally who is facing money laundering charges. As a condition to return to dialogues, Maduro also called on the U.S. to lift sanctions against his country.

In addition to covering election topics, the return to dialogues will also encourage discussions about the state of hundreds of political prisoners, U.S. sanctions on Venezuela, and a social plan to distribute $3 billion in goods and investment for humanitarian aid from the U.N. administered fund.

HAITI: Former police officer turned gang leader Jimmy Chérizier announced Sunday that he was lifting the blockade at a key fuel terminal in Port-au-Prince that halted Haiti’s economy for almost two months. Chérizier’s G9 gang took control of the fuel terminal on September 12 demanding the resignation of Prime Minister Ariel Henry, after announcing an end to fuel subsidies the day prior.

The government claims some of the success was due to Haiti’s National Police’s efforts to regain access to the terminal. But doubts continue over who controls it and if fuel has been able to leave.

Chérizier also denounced any claim that either the gang or its affiliates have negotiated with the prime minister.

EL SALVADOR: The Ministry of Justice and Public Security announced on Friday that the number of alleged gang members arrested since March reached 56,716.

The arrests are part of a government operation that began in response to a spate of killings between March 25 and 27 that left 88 civilians dead. On March 26 alone, over 60 people were killed, the deadliest day in the country’s history since the Civil War.

On March 26, President Nayib Bukele requested that the National Assembly enforce a “state of exception” in accordance with Article 29 of the constitution. It approved the move the next day. The state of exception dampers basic constitutional rights in response to existential threats.

NICARAGUA: Nicaraguans voted in municipal elections on Sunday for mayors, deputy mayors, and council members for the country’s 153 municipalities. Some 3.7 million eligible voters were called to cast their ballots at 7,931 voting locations, each with a capacity to take 600 votes.

The Nicaraguan government’s handling of the elections has been criticized on multiple fronts. Ahead of the elections, the nation’s highest election authority removed 755,450 voters from the electoral registry without explanation. Furthermore, the National Assembly passed a law allowing eligible citizens to vote with expired IDs.

A report by the independent watchdog Urnas Abiertas reported arrests held on election day. The United Nations expressed similar concerns over arrests that took place the day prior.

UNITED STATES/MEXICO: The State Department said in a release that a nuclear energy agreement between the United States and Mexico entered into force on Thursday.

The Agreement for Cooperation in Peaceful Uses of Nuclear Energy was signed by both countries in 2018 and was approved by the Mexican senate in March. The agreement is the first of its kind for the U.S. and Mexico, and is intended to “provide a legal framework for exports of nuclear material, equipment, and components from the United States to another country.”

Mexico’s state-owned Federal Electricity Commission (CFE) operates one nuclear power plant with two reactors. A CFE official said in 2019 that it was “advisable” to add four more reactors, but that hasn’t happened.

MEXICO: Mexico’s Senate voted unanimously on Thursday to double the length of annual leave from six to 12 days.

President of the Labor and Social Welfare Commission, Senator Napoleón Gómez Urrutia said the bill is intended to give more time for rest and recreation. “Work is one of the many components of a full life. In the same way, we need free time for our personal development,” he said.