Just a day after a confusing scene in El Paso involving the “Stop the Invasion” Border Convoy and allegations of gun threats, a new Facebook post by Convoy organizers says the group’s members “faced significant threat on I10 coming through El Paso” and that “a vehicle containing two ‘human rights activists’ who were also wearing clothing suggesting relation to cartels and/or La Raza, attempted to cause several of our convoy vehicles to crash or run off the road.” 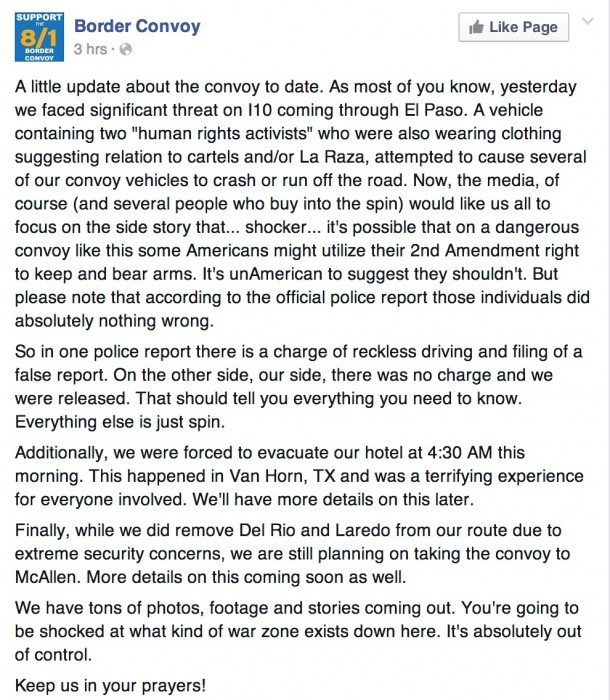 The group also posted this in the comments section: “We’re currently in San Antonio, TX. But we’re now traveling in unmarked vehicles for security reasons.” That comment led to others including this one from a fan of the page: “It doesn’t matter what “good” areas that this convoy goes to, the opposition is following them and striking anywhere. No area is safe when you are being followed by cartel and people who want to elicit violence.”

The Border Convoy was in the middle of an eight-day trek from Murrieta, California, to McAllen, Texas, when it had decided to cancel an El Paso event due to what they said were “death threats.” That decision led to a rather chaotic scene captured on video which raised more questions than answers. Other videos show what happened on Sunday on I-10.

Police spokesman Det. Mike Baranyay said police received a call alleging a gun threat at about 5 p.m. Sunday, but that there were some inconsistencies in the allegation.

No one was arrested and police let the convoy continue on its tour of the border.

Baranyay said members of the convoy alleged that a pro-immigration activist tried to run them off the road.

Both allegations are still under investigation, Baranyay said.

Pro-immigration activist Miguel Juarez said he had spotted the convoy traveling through El Paso and followed it. He said he wanted to see if an anti-illegal immigration rally that was said to have been cancelled would still be held.

Juarez said the convoy was travelling near Western Refining on Trowbridge Drive about two miles south of I-10 when one of the cars pulled over. He alleges someone from the Border Convoy got out of the car, pointed a rifle at him and asked if he was following the convoy.

As you might imagine, the Facebook page for Border Convoy has become a contentious place for comments and debate. Nonetheless, this one comment caught our attention, since it sure didn’t seem to be coming from a “La Raza” type: 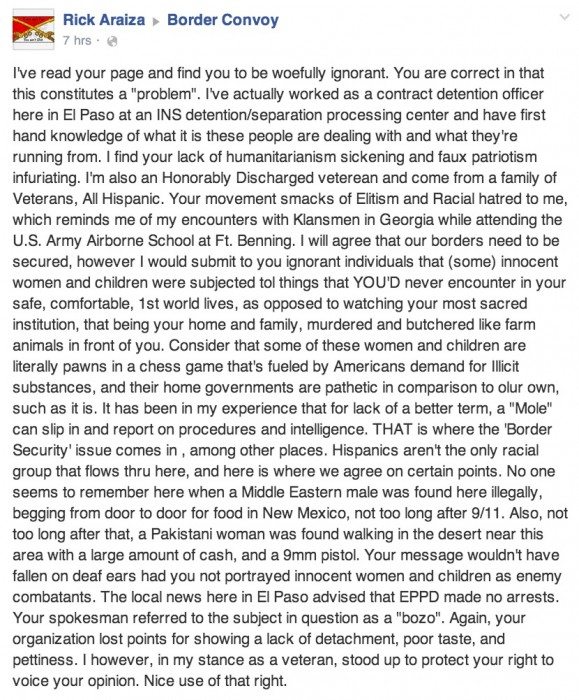 Latino Rebels continues to tweet @BorderConvoy for clarification and more details. The organizers have not tweeted us back since yesterday. Here is the last tweet they sent with us being mentioned:

@geeksabre @latinorebels and that is exactly why this nation needs border security. Dangerous people like you.

NOTE: We do not respond to ambush media questions.

And apparently, the group just got contacted by Breitbart Texas: